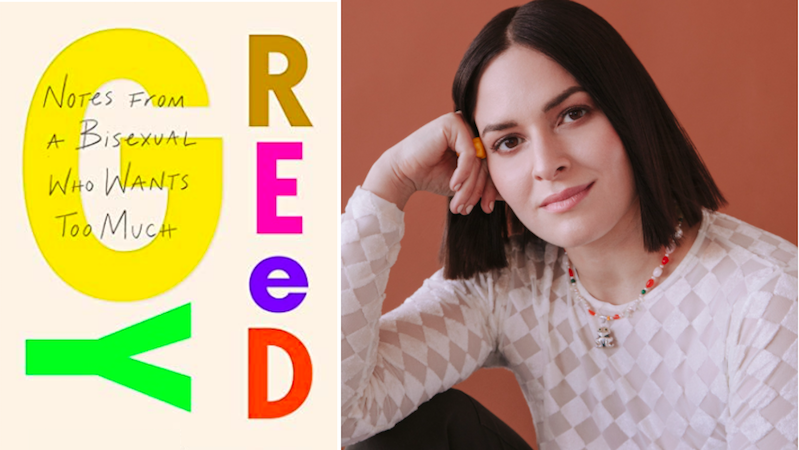 Jen Winston on Bluets, Bisexual Representation, and Hating the Classics

Rapid-fire book recs from the author of Greedy: Notes from a Bisexual Who Wants Too Much

This week, we spoke to the author of Greedy: Notes from a Bisexual Who Wants Too Much, Jen Winston.

Jen Winston: A Bad Case of the Stripes by David Shannon. At 7, I devoured this book while sipping hot cocoa in the Borders Bookstore cafe like the wannabe beat poet I was. At 32 (that is—this year), I realized my passion for ABCOTS was probably a harbinger of my queerness (at least according to those “if you liked X, you’re gay now!” memes, which are basically a scholarly source). In hindsight, my fate should’ve been obvious: The book is about a girl who learns to love herself even after her skin turns “rainbow”—can’t get much more on the nose than that. ¯\_(ツ)_/¯

JW: I hardly ever re-read books, with one exception: In the Dream House by Carmen Maria Machado. I own it in hardcover, paperback, ebook, and audiobook (I had reasons for all of them, I swear). This book is such a powerful rumination on queer relationships and sexism, as well as what emotional abuse looks like through both of those lenses. On top of all that, it reimagines the genre of memoir, and does so effortlessly. I learn something new every time I open it.

JW: If I’m going to flatter myself, I’d say Shiri Eisner’s Bi: Notes For A Bisexual Revolution. I’m like a broken record with how much I plug this book (even within my own book!), but Bi immensely shifted my perception of bisexuality. Shiri positions bisexuality as a radical political identity, highlighting that it inherently challenges so many dominant systems and assumptions about the way the world works. I used to crave bi representation in mainstream pop culture, and while that’s still critical, I had no idea academic queer theory could have such a profound effect on me. Reading Bi was the first time I truly felt proud to be bisexual—I hope that pride shows up in Greedy too.

JW: Trust Exercise by Susan Choi. The twists and turns in this baby! (I can call the book “baby” because at the beginning of the pandemic I treated my copy like my own child—we slept in bed together every night, and if so much as a drop of water got on the jacket I’d spend the next twenty minutes dabbing the stain with a towel, nursing the book back to health.) I was honestly devastated when I finished it in two days, both because it was over and because the end ruined my life (in the best way). Incredible prose and an even better plot! I wish I could read it for the first time all over again.

JW: Qian Julie Wang’s Beautiful Country. One of the coolest things about writing a book is meeting other authors—then sometimes you read their work and realize it’s STAGGERINGLY good. I’m honored to know Qian Julie and to have read her intimate, electric memoir. Most of her reviews recommend incorporating Beautiful Country into school curriculums, which is a push I can’t upvote hard enough.

JW: Detransition, Baby. This is not an original or obscure shout-out, but it’s still the book that felt most pivotal to my 2021. I’m so grateful for Torrey Peters’ humor, characters, and nuanced storytelling—I learned so much from her words even though it didn’t feel like I was learning. If I ever write a novel (the odds of which are slim to none, but still), I’m treating this as the gold standard.

JW: Maggie Nelson’s Bluets. My entire worldview opened up after reading this book (if you can even call a lyric poem/autobiography/philosophical meditation of this caliber a “book”—how dare we try to contain it to its pages and object form alone!). If I’d read Bluets earlier in life, I’d have a much stronger understanding that all feelings are beautiful, and worth sitting with—especially the devastating ones. (Also, if I’d read it earlier in life, I’m sure I’d be a better writer today.)

JW: Hot take: I hate most “classic” books. Sure, on an individual level, some can be cute (and I do get off on randomly quoting Paradise Lost), but I resent the idea of “canon” now that I know how much it’s wrapped up with the idea of patriarchy. On top of that, I blame classic books for making me think I couldn’t be a writer. My college friend group consisted primarily of well-read English majors—their pretentious syllabi and collective obsession with Dante made me feel like my preferred genre—memoir—wasn’t literary enough to read. Since then, many writers (e.g. Jia Tolentino, Tracy McMillan Cottom) have defended the genre, highlighting its function as a tool for marginalized people to tell their own stories firsthand. Now I see memoir as a radical medium in and of itself, even though it’s been one all along.

JW: Classic bisexual answer: Sally Rooney’s Beautiful World, Where Are You. Just to be a contrarian, I always try to not be obsessed with Sally Rooney—when a new book comes out, I put off reading it for a few weeks until the hype has gone down. But when I inevitably cave, I fall just as hard as everyone else into the worlds she builds and the characters she creates. I started listening to her latest on audiobook yesterday, and now I can’t stop. That said, I’m only halfway through but I do have one bone to pick: While I’m thrilled about BWWAY‘s queer threads, it really does irk me when anyone characterizes bisexuality as an attraction to “men and women.” For the millionth time: Bisexuality means being attracted to more than one gender, and for many bi people (like moi) that very much includes nonbinary people. (Maybe Rooney addresses this later in the text, but I’ll take any opportunity to bitch about it.)

JW: Greedy: Notes From A Bisexual Who Wants Too Much by Jen Winston—just gonna leave this here. 🙃

Jen Winston (she/they) is a writer, creative director, and bisexual based in Brooklyn. Their work bridges the intersection of sex, politics, and technology, and has been featured in The Wall Street Journal, The Washington Post, CNN, and more. Jen is passionate about unlearning and creating work that helps others do the same. Her newsletter, The Bi Monthly, is dedicated to exploring bi issues and experiences—it comes out every month, much like Jen herself. Follow Jen on Twitter, Instagram, and TikTok (please, she’s begging you): @Jenerous. 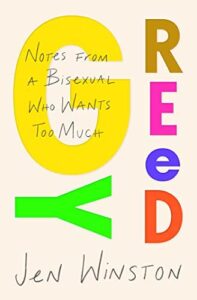 Jen Winston’s Greedy is out this week from Atria Books