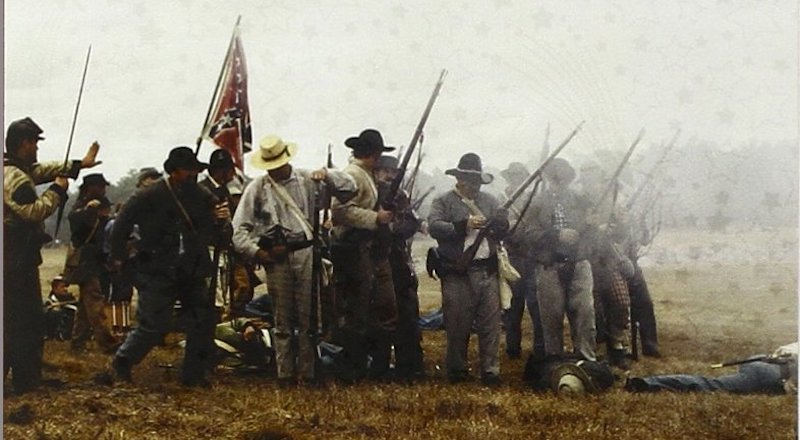 "Mr. Saunders is one of those rare writers who can effortlessly blend satire and sentiment." 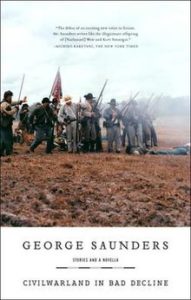 “I have a sense that God is unfair and preferentially punishes his weak, his dumb, his fat, his lazy. I believe he takes more pleasure in his perfect creatures, and cheers them on like a brainless dad as they run roughshod over the rest of us. He gives us a need for love, and no way to get any. He gives us a desire to be liked, and personal attributes that make us utterly unlikable. Having placed his flawed and needy children in a world of exacting specifications, he deducts the difference between what we have and what we need from our hearts and our self-esteem and our mental health.”

“George Saunders has been thinking about the future, and he’s decided it’s really the past—a cleaned-up, Astroturfed version of history, complete with tour guides and artificial trout streams. Most of the stories in his first collection are set in theme parks in the not-too-distant future, bucolic compounds that offer refuge from the chaos outside. But the past sometimes intrudes on this antiseptic rendition of itself, mainly in the form of ghosts.

One hopes Mr. Saunders is not exactly a visionary. Yet he is demonstrably a cool satirist and a wicked stylist. CivilWarLand in Bad Decline is just about the quirkiest and most accomplished short-story debut since Barry Hannah’s Airships. 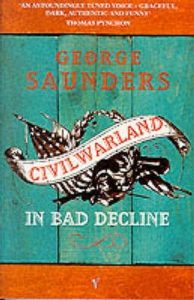 “The narrator of the title story, in typical Saunders fashion, is employed in a menial position in a park that simulates the life of the mid-19th century. ‘Whenever a potential big investor comes for the tour,’ he tells us, ‘the first thing I do is take him out to the transplanted Erie Canal Lock. We’ve got a good 90 feet of actual Canal out there and a well-researched dioramic of a coolie campsite. Were our faces ever red when we found out it was actually the Irish who built the Canal.’

He should be embarrassed; after all, he was a ‘verisimilitude inspector’ for nine years. Meantime, he’s being tormented by the ghosts of the McKinnon family, who farmed the land during the period in question—until Mr. McKinnon butchered his wife and daughters in a field. As if that weren’t bad enough, modern-day gangs of teen-agers are spraying the lock with graffiti and swooping down to molest the visitors. When it’s discovered that one of the park employees was kicked out of Vietnam for participating in a blood bath, the management provides him with live ammunition and authority to go after the gangs. Not surprisingly, the decline of CivilWarLand rapidly accelerates. 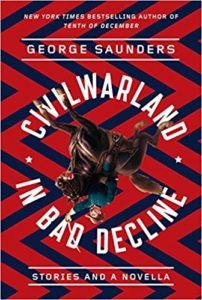 “The protagonist of ‘The Wavemaker Falters,’ also an employee of a theme park, is haunted by the ghost of a little boy named Clive, whom he accidentally pured in the wave machine at Kawabunga Kove while ogling the members of a girls’ glee club. Here’s the opening sentence, which, sadly, has almost nothing to do with the rest of the story: ‘Halfway up the mountain it’s the Center for Wayward Nuns, full of sisters and other religious personnel who’ve become doubtful.’ The curious pronoun gives the sentence an extra twist that is typical of the special pleasures of Mr. Saunders’s prose—although, if I were presented with this line as a Jeopardy question, I might be tempted to answer, ‘Who is Barry Hannah?’

Mr. Saunders has an ear for the offbeat cadences of the contemporary idiom, not least the language of businessmen. The employers of his hapless first-person narrators tend to distort the language as deftly as they do history. ‘Respect,’ says one of them. ‘That’s the quality I hope to imbibe to you during the confab that is to follow this present preface I’m extolling.’ 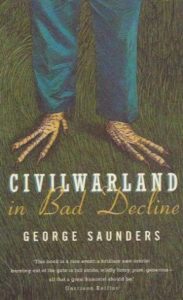 “The danger of a style as singular as this is that it can seem mannered in a book-length dose. And in a story like ‘Downtrodden Mary’s Failed Campaign of Terror,’ set in a theme park featuring a cow with a Plexiglas window in its flank, Mr. Saunders seems to be parodying himself, which is no small feat for a rookie storyteller. But just when you plan to rebel against all the wacky tics, his stories take surprising and sometimes stunning turns. Quite unexpectedly, between guffaws, you find yourself moved. Mr. Saunders is one of those rare writers who can effortlessly blend satire and sentiment.

Among the most affecting of his stories is ‘Offloading for Mrs. Schwartz.’ Here the narrator operates a franchise of a virtual-reality emporium whose customers choose among offerings like ‘Violated Prom Queen,’ ‘Bowling With the Pros’ and ‘Legendary American Killers Stalk You.’ Though she does not appear as a ghost, he is haunted by the memory of a girlfriend who was killed shortly after they had a fight and he yelled an epithet so horrible he can’t repeat it. This tortured entrepreneur accidentally discovers a way to download his own guilty memory to a disk. When he wakes up as a tabula rasa, he has a note pinned to his sleeve: ‘Your heart has never been broken. You’ve never done anything unforgivable or hurt anyone beyond reparation. Everyone you’ve ever loved you’ve treated like gold.’ 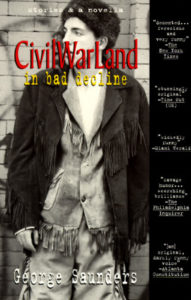 “The novella that ends the collection displays most of the now-familiar Saunders touches and resembles nothing quite so much as the early, picaresque novels of Tobias Smollett. Like Roderick Random and Peregrine Pickle, the nameless protagonist of ‘Bounty’ is a hapless innocent abroad in a world of grotesques. The story begins in (no surprise) a theme park called BountyLand in a postapocalyptic America where environmental poisoning has created a huge class of the malformed, who serve as slaves to those still left intact. Working as a faux peasant or an orgy director in BountyLand is a relatively good situation for ‘the Flawed,’ who at least get three square servings of black bean soup and a nightly ration of cocaine. But the narrator, who has claws instead of toes, is forced out into the world in search of his sister, who has a vestigial tail.

In the wake of environmental disaster and political Darwinism, it’s an ugly world out there, though not one that is entirely unfamiliar. And why not? Mr. Saunders’s subject, like that of all good satirists, is not really the future but the present.”