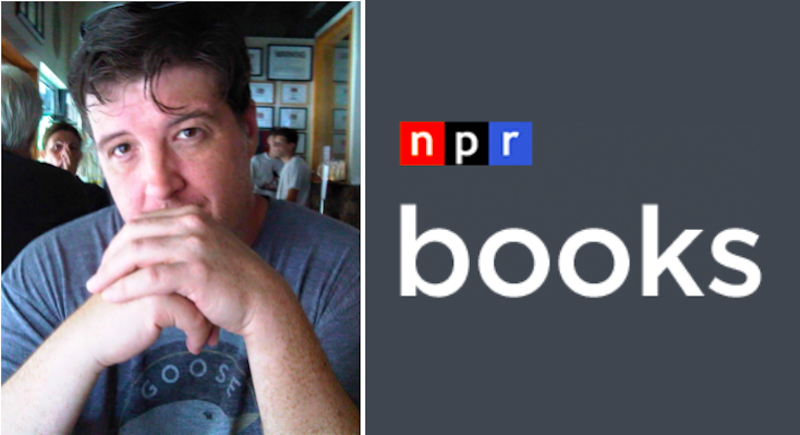 "When done right, criticism is journalism—it is sniffing after stories, doing the research, finding the interesting angle"

This week we spoke to Philadelphia-based writer and critic, Jason Sheehan.

Jason Sheehan: You have no idea how long I spent trying to pick some imaginary right answer to this-one that would make me sound smart and worldly and wise and cool. But you know what? I have this conversation with myself all the time. It’s like a thought experiment that I play when I’m stuck for inspiration or joy. So the honest answer is Roger Zelazny’s Chronicles of Amber (the first 5 books) because it was this perfect distillation of ’70’s weirdo slipstream fantasy. All butterfly collars and swordfights. And I would’ve loved to have seen an ARC of William Gibson’s Neuromancer when it came out just so I could’ve had my mind blown without any preconceptions (without hearing its name whispered among older, hipper nerds who got to it before I did).

JS: The Sky Is Yours by Chandler Klang Smith. It bothers me to this day that such a dark, satirical, almost childlike vision of a future where two dragons circling over the smoking ruins of New York City is the least strange thing happening didn’t get more notice. Scribe by Alyson Hagy is lean and brutal and comes at you with blood in its teeth. And while Katie Williams’s Tell The Machine Goodnight wasn’t exactly unheralded, twice as many people should read it as already have. It is one of the most human science fiction novels I’ve ever read.

JS: I’m honestly not sure that anyone thinks enough about book critics or criticism to have any misconceptions. Except maybe other critics. But if there was a common misperception, I’d say it was that this thing—this thing we do—is some kind of big elitist garden party where we just gush and fawn and pass plums around to our favorite celebrity scribblers. When done right, criticism is journalism—it is sniffing after stories, doing the research, finding the interesting angle and then telling people something they don’t know. I can’t speak for my fellow critics, but I’ll bet you two beers that most of them would say that the best day on this job is the day we find some small, unnoticed book by a wicked talent and get to geek out over whatever it is about it that makes our hearts race.

JS: As in all arenas of criticism, social media has done that mirror trick of making us all both infinitely bigger and infinitely smaller. It has democratized the scene, absolutely. It has brought a flood of voices. It has thrown light on the deserving and shade at the vile. It has given critics access to a billion eyeballs that we might not otherwise have ever been put in front of but, at the same time, diminished the role by perpetuating the fallacy that anyone can be a critic—that if you read one book and have an opinion on it, that opinion should be weighted equally to someone who has read a thousand books and is judging this one in particular against all that they’ve learned over a career of thinking a LOT about books.

That said, social media also lets me listen to Chuck Wendig talk about bee beards and Lavie Tidhar goof around by re-writing scenes from children’s lit as sci-fi or hard-boiled detective stories, so I’m gonna say, on balance, things are better (in Bookland) thanks to social media. The rest of the world, on the other hand, largely remains a garbage fire graced with the occasional hedgehog video.

JS: Nathan Grayson and Kirk Hamilton on video games because they take them as seriously as any scholar ever did Faulkner. Zadie Smith because she walks the walk. Jason Heller, one of my compatriots at NPR, mostly writes about music now, but he used to do books. In both cases, his criticism comes from a place of deep and abiding geekery. He loves and hates with the intensity of a teenager alone in his bedroom, living and dying by every word and note, and that’s admirable. And finally, Elif Batuman. She isn’t really a critic in the book-a-week sense, but her thoughts on literary criticism (particularly regarding linguistics, art-vs-craft and the horrors of the New England literary community) made me come to terms with some hard truths—primarily that I would love to have a drink and an argument with Elif Batuman, and that I’m not sure who would win it.

Jason Sheehan knows stuff about books, video games, food and Starblazers. He is a book critic for NPR, restaurant critic at Philadelphia magazine, and has written about all kinds of other things for CNN, Salon, Oxford American, The Guardian, and other publications. But when no one is looking, he spends his time writing stories about giant robots and ray guns. Tales from the Radiation Age is his latest book.