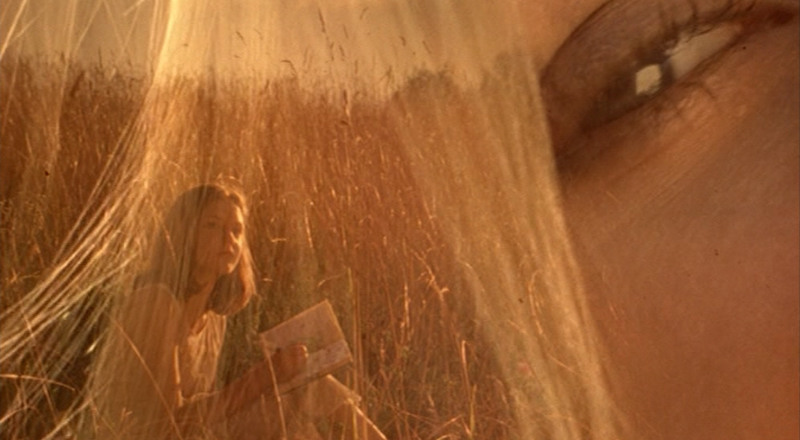 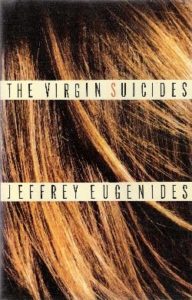 It didn’t matter in the end how old they had been, or that they were girls, but only that we had loved them, and that they hadn’t heard us calling, still do not hear us, up here in the tree house, with our thinning hair and soft bellies, calling them out of those rooms where they went to be alone for all time, alone in suicide, which is deeper than death, and where we will never find the pieces to put them back together

“Jeffrey Eugenides’s piercing first novel begins with a startling and horrible event: a 13-year-old girl hurls herself out of a window and impales herself on the iron fence that runs around her family’s house.

‘It didn’t matter,’ Mr. Eugenides’s narrator recalls, ‘whether her brain continued to flash on the way down, or if she regretted what she’d done, or if she had time to focus on the fence spikes shooting toward her. Her mind no longer existed in any way that mattered. The wind sound huffed, once, and then the moist thud jolted us, the sound of a watermelon breaking open, and for that moment everyone remained still and composed, as though listening to an orchestra, heads tilted to allow the ears to work and no belief coming in yet. Then Mrs. Lisbon, as though alone, said, “Oh, my God.” ‘ On her second try, her daughter Cecilia had succeeded in ‘hurling herself out of the world.’ 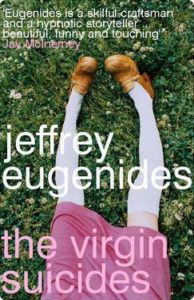 “This terrible event, along with the subsequent suicides of Cecilia Lisbon’s four pretty sisters, feels like something out of a Greek tragedy. It’s not at all the sort of thing one expects to find in a coming-of-age story set in the leafy Detroit suburbs of the 70’s; and as related by Mr. Eugenides, the deaths of the five Lisbon sisters take on the high, cold shimmer of myth. Their suicides become a symbol of the innocence lost as adolescents are initiated into the sad complexities of grown-up life, and the lost, dying dreams of a community that finds its collective dreams of safety spinning out of reach.

With its incantatory prose, its fascination with teen-age tragedy and its preoccupation with memory and desire and loss, The Virgin Suicides will instantly remind readers of Alice McDermott’s fine 1987 novel, That Night. Not only are the themes of the two books similar, but so also are their structures and narrative methods. Both novels focus on events that fracture the consciousness of an entire community into a before and after. And both are narrated by observers who recall the larger-than-life events of their youth from the vantage point of middle age. In their recollections, actual experiences blur together with the distortions of nostalgia; events are re-imagined, extrapolated and heightened in an effort to memorialize and make sense of the past. 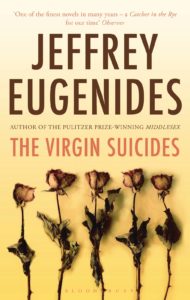 “In the case of The Virgin Suicides, the narrator is a collective ‘we,’ a group of young men who speak in one voice. They were once in love with the Lisbon girls, and are now, some 20 years later, trying to piece together the story of their deaths. These men, now balding and weary and a bit disappointed with their humdrum lives, serve as the book’s Greek chorus, stitching together the story of the Lisbon sisters’ tragedy, as they meditate upon its meaning.

Through this narrator, we catch a series of intriguing glimpses of the enigmatic Lisbon sisters: the saintly 13-year-old Cecilia, and her older siblings, the sexually precocious Lux, who at the age of 14 sleeps with men on the roof of her family’s house; the skittish romantic, Bonnie, who dreams of going on dates; fastidious Mary, who spends hours gazing at herself in a lighted mirror; and brainy, 17-year-old Therese, who grows fluorescent sea horses in a drinking glass in her room. 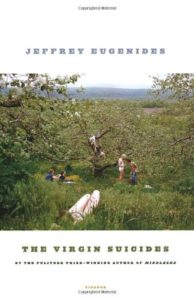 “Beautiful and eccentric, the sisters have captured the imagination of the neighborhood boys, who spend hours spying on them and collecting souvenirs of their lives: snapshots taken by neighbors, cosmetics stolen from the garbage, a brassiere filched one night from the house. What is the girls’ magical allure? In an ordinary suburban world of lawnmowers and barbecues, they represent the extraordinary: the odd, the inexplicable, the romantically extreme.

Under the thumb of their domineering mother—who never allows them to date, and who insists they wear baggy, ridiculous clothes—the Lisbon girls lead strangely hermetic lives, defined by church and school. Though their ineffectual father seems vaguely sympathetic to their plight, he never stands up to their tyrannical mother. 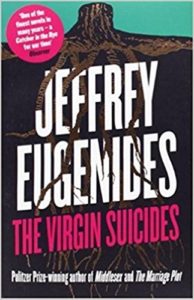 “Eventually the boys succeed in taking the Lisbon sisters on a single group date, but Lux breaks her mother’s curfew and the girls are permanently grounded. They are pulled out of school and locked in the house. In one memorable scene, their suitors make a last-ditch effort at communication. Having managed to get the girls on the phone, they begin playing them their favorite songs: ‘You’ve Got a Friend,’ ‘Wild Horses’ and ‘Time in a Bottle.’ The girls respond by furtively playing some of their favorite songs: ‘Alone Again, Naturally,’ ‘Where Do the Children Play?’ and ‘So Far Away.’

Nothing, however, impedes the girls’ withdrawal from the world. ‘The house receded behind its mists of youth being choked off,’ Mr. Eugenides’s narrator recalls, ‘and even our own parents began to mention how dim and unhealthy the place looked.’ Leaves pile up on the lawn, garbage collects by the curb, and at night, raccoons prowl its yard. Sour, unpleasant smells seep out of the house, and grime and dust soon cover over its windows and doors. 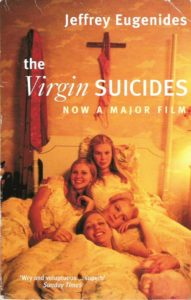 “The reader repeatedly wonders why the girls don’t rebel. Why don’t they reach out to friends, or run away from home? Why don’t the authorities insist that they go to school? What has driven their mother to impose such a strict regime in the first place?

Such obvious questions are never addressed by Mr. Eugenides, and his willful ignoring of these issues can grate on the reader’s nerves, momentarily breaking the spell of his tale.

Gradually, however, the narrator’s hypnotic voice succeeds in transporting us to that mythic realm where fate, not common sense or psychology, holds sway. By turns lyrical and portentous, ferocious and elegiac, The Virgin Suicides insinuates itself into our minds as a small but powerful opera in the unexpected form of a novel.”