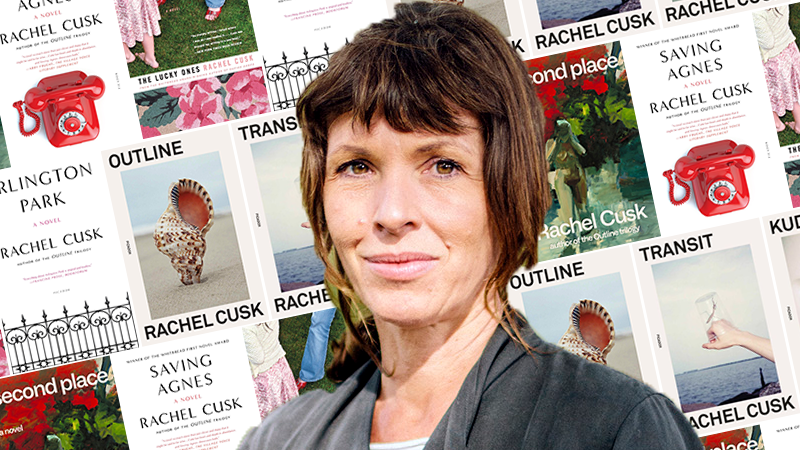 This week, Lori considers the novels of Rachel Cusk.

The women of Rachel Cusk’s novels long to feel free, to be liberated from the pull of emotional entanglements and the attendant obligations that so often frustrate the exercise of their creativity. It is this quest for a female expression of creative freedom that unites much of Cusk’s three decades of writing culminating in her latest novel and masterpiece, Second Place.

What Cusk readers will notice right away about Second Place is the book’s departure from the “quiet interlocutor” narrator (Faye) of the author’s previous trilogy of Outline novels. Instead the narrator of Second Place, a fifty-year-old wife and mother who we know as simply “M,” recounts in a manner both urgent and confiding the very personal and transformative events surrounding her relationship with the artist L and his paintings.

M’s initial encounter with L’s work occurs on a visit to Paris, where she is attending a writer’s conference. On her final night in the city M finds herself bar hopping with a famous writer from the conference. Later the writer walks M to the entrance of her hotel “where he visibly—to the point of unchivalrousness—decided I wasn’t worth whatever risk to his status quo our spending the night together would have represented.” M’s deep disappointment that the writer refused the opportunity for sex allows her to see how desperately she desires the destruction of her own status quo, to be freed from her marriage and a life centered around the needs of her husband and daughter.

It is on the following morning at a Parisian art gallery that M first sees L’s paintings, and in her vulnerable state of mind she is profoundly affected by them. M feels that the paintings speak directly to her in expressing an intensity and passion that she yearns to experience and, even more so, in their “aura of absolute freedom…a freedom that is elementally and unrepentingly male.” The idea of absolute freedom is so compelling to M that she is prepared to sacrifice everything to obtain it. Her intention is tested some fifteen years later when L accepts M’s invitation to be an artist-in-residence at her and her second husband Tony’s guest house, located on a serene and picturesque tract of marshland off the English coast.

Since being overwhelmed by the passion and freedom in L’s paintings on that Paris morning, M has held fast to the belief that L, as their creator, must embody these same characteristics. And in much the same way that M identifies with L’s art and feels recognized by it, she longs to discover what L, in turn, will see in her. What intrinsic aspects of her character and potential—things about herself that she has never been able to perceive on her own—will L’s paintbrush reveal? She has been living for years with the expectation that L is the only man who can make her visible to herself.

A woman’s inability to know herself, absent the male gaze, is a recurring theme in Cusk’s fiction. More than the affirmation that others think about her in much the same way as she sees herself, many of Cusk’s women look to men to define and substantiate them. It is as though the woman’s identity is an empty vessel that can only be filled by a man’s impressions of her.

In Cusk’s first novel, Saving Agnes (1993), the eponymous protagonist laments that her former boyfriend “created a version of herself which she could somehow never imitate afterwards.” A lengthening crack in the wall of Agnes’ house symbolizes the split in her self-identity—the way she saw herself through John’s eyes versus the reality of who she really is. Elena, Faye’s friend in Outline, describes the issue succinctly. Responding to a suggestion that she ask a certain inscrutable man what he really thinks of her, Elena refuses to do so, asserting that she does not “compose herself” from others’ ideas. Unlike Elena, M is unable to “compose herself.” She recalls raging at Tony in a moment of frustration with the accusation that “he never gave me any real attention of the kind that makes a woman feel like a woman and just expected me to sort of give birth to myself all the time, like Venus out of a seashell.”

When L finally does arrive at the marsh, much to M’s surprise and dismay, he is accompanied by a young, beautiful female “friend,” Brett. Adding to M’s disappointment is the fact that L is not at all like the man she had envisioned. He is wiry, small, effeminate, and even “goatish” in appearance, and his manner is taciturn and stand-offish. Cusk’s physical descriptions of both L and M’s beautiful home on the marsh naturally bring to mind a Biblical parallel: M has invited the devil into her Garden of Eden, and her unsatiated desire to be completely free is the forbidden fruit for which she will destroy the idyll of her life with Tony.

As days pass and L and Brett settle into the guest house, M becomes increasingly troubled by L’s avoidance of her and his apparent disinterest in painting her. Instead L paints Tony and even expresses an interest in painting M’s daughter Justine, who is visiting from Berlin along with her boyfriend Kurt. When M gathers the courage to question L on his reason for not wanting to paint her, he replies that he is unable to really see her. This response devastates M because it affirms her long-held feelings of invisibility and upends her conviction that L is the man who will finally recognize and validate her individuality. Later L explains that he draws inspiration from people who are morally unavailable to him because painting them is a means of violating and possessing them; unavailability is the antidote to the “stench of human familiarity.” In other words to be known by L is to lose your sensuality, a condition that incapacitates his artistry. Reflecting on this conversation M comes to believe that she is familiar to L because he perceives her as a mother-figure, “a woman he couldn’t obliterate or transfigure with his own desire.”

How motherhood challenges a woman’s self-regard and personal autonomy is a topic that Cusk returns to over the course of her writing. M describes L’s paintings as emanating an “absolute freedom,” a “male” freedom. This total freedom finds expression in L’s work because L himself lacks any sense of moral obligation or duty. M’s captivation with L’s freedom stems from the fact that it is unattainable for her. A selfish immorality like L’s is incompatible with maternal feeling and its engendered obligations for mothers like M who have in their care “the custody of human souls.”

Undoubtedly the demands of motherhood constrain a woman’s creative output, and there are many examples of this in Cusk’s sensitive depictions of “artist-mothers”—writers and painters whose careers are stymied even more so than traditional career mothers because artistic endeavor is so often devalued and considered a lesser, even unworthy vocation. But Cusk also honors the creation innate in mothering not only at conception and birth, but the long-term creative act of nurturing a child:

…mothers, who over the years had filled them in with countless acts, like countless dabs of paint applied to a portrait. Their mothers had colored them, shaded them, rounded them out…each woman had felt the sense of her own artistry as she dabbed away with her brush…had transferred her soul, had lifted it from her breast, had transferred it little by little in dabs of paint.” (Arlington Park).

For all of the serious themes in these novels, readers will find humor as well, like the episode in Second Place when Justine’s boyfriend Kurt suddenly announces that he has decided to be writer and immediately starts writing a book. Donning a black velvet robe and red tam-o’-shanter, Kurt diligently hides away in a room for several days emerging one night to read aloud his work in progress, which, as Justine later confides to her mother, is actually a faithful rendition of a novel that she and Kurt had purchased months before. Cusk’s character portrayals can also be very funny. My favorite is The Lucky Ones’ Mrs. Daley, a petty, self-satisfied woman who is barely able to conceal her envy of her grown daughter. Cusk’s portrayal reveals the complicated feelings that underlie Mrs. Daley’s biting sarcasm.

Cusk’s powers of observation are demonstrated continually in her vividly detailed descriptions of faces, settings, and even weather. The first five pages of Arlington Park describe a constant, heavy rain falling at night on a London suburb. The roar of the water sounds like hands clapping, as though the people asleep in their beds were actors on a stage being applauded by an audience outside their windows. This description serves as a beautiful and eloquent prelude to this novel about striving, middle class families who have become disenchanted with the roles they have chosen for themselves amongst the trappings of gentrified prosperity.

Cusk’s characters talk about self-awareness as a mirror that one must pass through in order to distinguish human fictions from reality. When M finally sees herself in this mirror, she understands that the freedom to write does not require the selfish destruction of her family; rather, the liberation to create is found in honoring the “balance sheet” of life: she must create with a generosity that compensates for the many things she has received from this world. It is a self-reckoning that finds moral justice to be the means for living and creating with authenticity.