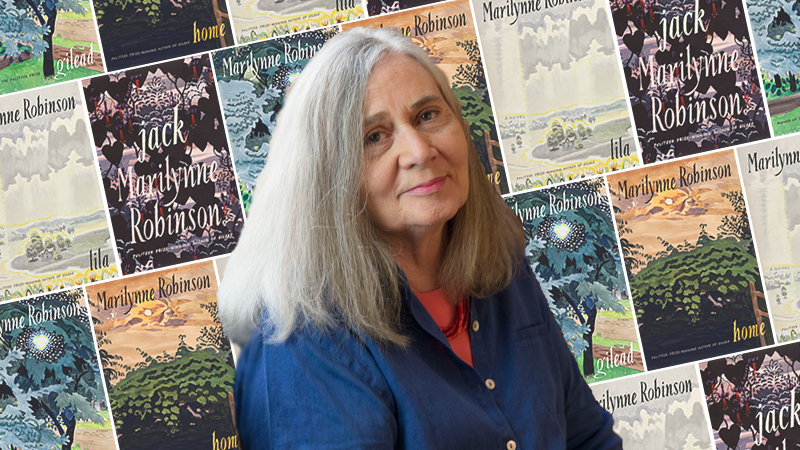 This week, Lori considers the novels of Marilynne Robinson.

Fifteen years ago writer Marilynne Robinson introduced readers to the fictional town of Gilead, Iowa, the lifelong home of two aging friends and fellow ministers, John Ames and Robert Broughton. Gilead won the Pulitzer Prize for Fiction in 2005, and Robinson followed it with the novels Home and Lila, both again set in Gilead among the Ames and Broughton families. With this triptych Robinson depicts a sedate, largely wholesome way of life in America’s heartland during the mid-twentieth century. Gilead’s idyll, however, is upended at times by Jack Broughton—drifter and drunk; sower of anger, sorrow, and self-doubt; the favored, prodigal son of Robert Broughton; and John Ames’ godchild. Whether returned to Gilead for a visit or long absented, Jack compromises the good intentions, clear consciences, and equanimity of his family and friends who see their reaction toward him as the litmus of their own godliness. Now with Robinson’s latest novel, Jack, which takes place several years prior to the events in Home, expectant readers are set to discover more about this enigmatic, troubling man. This time from Jack’s point of view.

Jack opens in St. Louis during the final moments of a disastrous first date. Della is walking home, furious with Jack for abandoning her at a restaurant shortly before their dinner arrives. Della assumes that Jack disappeared because he feared being seen with her, a Black woman. Rushing to catch Della before she reaches home Jack apologizes, explaining that he fled the restaurant to avoid confrontation with two men who would have threatened him for money. In this exchange between Della and Jack we get an early glimpse of Jack’s demeanor—formally polite, self-deprecating, and, per Della, “ridiculous.” The evening ends in disappointment, and neither Della nor Jack believes that they will see each other again.

One year later Jack is awaiting nightfall in St. Louis’ Bellefontaine Cemetery with his bedroll in tow when, to his surprise, he encounters Della for the first time since their aborted date. The two spend all night together talking in the cemetery under the pretext that Bellefontaine’s gates have been locked for the night and any appeal for assistance would result in Della being discovered in a white cemetery late at night and could jeopardize her teaching job.

Della’s father, like Jack’s, is a minister, and this common aspect of their upbringing steers their night-long conversation to topics such as the Bible, morality, and predestination—a favorite subject of Robinson’s. As with the other Gilead novels, Jack contemplates what it means to be good, as viewed through the lens of Christian theology. No contemporary American author writes with more clarity and depth of feeling about the quotidian moral questions of ordinary people than Robinson. She illuminates her characters’ humanity by digging into the psychological nuances of their hopes and self-doubts.

Jack tells Della that his father has long feared him to be a reprobate, rejected by God. But because he is unwilling to accept this as God’s verdict for Jack, Reverend Broughton continually reworks his interpretation of the Bible to accommodate the possibility of Jack’s salvation. For his part, Jack rejects the idea of salvation and believes he is damned because he is inherently evil. Jack tries to convince Della of his evil nature by confessing his disreputable qualities and uncharitable thoughts. Della is unpersuaded.

…You’re just like everybody else. You seem to think other people aren’t doing the same thing you are, more or less. I don’t go around revealing my innermost thoughts, I can tell you that.

Jack’s guilelessness with everyone, even those who wish him ill, leads to his frequent humiliation. A state that he embraces as though his mortification is justly deserved, like one of Dostoevsky’s heroes. In fact Jack thinks of his “ridiculous life” as similar to a Russian novel, and it is not hard to imagine him as the God-doubting counterpart to Dostoevsky’s “holy fool.”

Jack’s view of himself as evil is shaped by an event from his youth: he impregnated a poor, uneducated girl in Gilead then callously deserted her by going off to college. Traveling to Chicago years later in an ill-conceived and fruitless attempt to reconnect with her, Jack finds himself on a city sidewalk emerging from a drunken black-out and robbed of his wallet.

…he was confronted with the indisputable truth that all by himself in a strange city, he was in a situation and a condition that would indeed cause his mother sorrow and humiliation…Then it was that he first realized what an exquisite thing harmlessness must be….

Even as a child Jack discerned a fragility about his mother; she was sensitive and easily hurt. And Jack believes that he is especially drawn to those, like his mother, most vulnerable to his harm. So he aspires to be harmless and convinces himself that this will be possible only if he remains alone. However, the consequences of this self-imposed isolation are terrible. Jack’s petty thievery, for which he served prison time, is born of his loneliness—the impulse “to weave himself into the emotional fabric of another life.” And on the rare occasions that he socializes, Jack gets drunk beforehand, preemptively sabotaging any agency he might have in failing to satisfy others’ social expectations of him.

Jack finds it extraordinary that Della seems untroubled by his confessed evilness and that she even loves him despite it. But Jack knows it is inevitable that he will injure Della: leaving her would be a painful betrayal; remaining will result in the loss of her teaching position and turn her family against her for loving a white man.

St. Louis’ virulent racism in the 1950s is an ever-present, invidious interloper in Jack and Della’s courtship. Every time they are together, they must confront the palpable hostility and the threat of violence from whites. Moreover, members of Della’s close-knit family arrive from Memphis as emissaries of Della’s father, a prominent Black minister and community leader, in an effort to convince Jack that he must cut ties with Della.

From an early age Jack felt estranged from his family and kept emotionally (and when he could, physically) separate from his parents and five siblings. In Home when Jack visits Gilead after a twenty-year absence, his father recalls,

…I just never knew another child who didn’t feel at home in the house where he was born. All the others, you know…[i]t was always like a big party in here, all the games they would play, all the noise they made…And if you could find a way to leave, you’d be gone.

Feeling at home and what this signifies is a theme of Robinson’s; the practice of “keeping house” serves as a metaphor for having a sense of belonging and identifying with a place. And of course Housekeeping is the title that Robinson chose for her first novel published forty years ago. In it Sylvie, the eccentric aunt of orphaned sisters Lucille and Ruthie, moves back into the family’s homestead to be the girls’ guardian following their grandmother’s death. Ruthie, who narrates Housekeeping, notes that while Sylvie “talked a great deal about housekeeping,” their home was in constant disarray. Rather than keeping house Sylvie wanders the nearby woods. At night she sleeps outside on the lawn, and for days on end leaves the house windows and doors wide-open, exposing everything inside to the elements.

Similarly Lila, John Ames’ young wife and the eponymous protagonist of one of the Gilead novels, is reluctant to embrace her new home. Already a year and a half into their marriage Ames tries to encourage Lila telling her,

…I hope sometime that you’ll feel—a little more at home, Lila…you’ll move things around a little in here …My point is that things don’t have to stay the way they are. If you want to change them.

Again, in Home, Jack’s sister Glory reflects that Jack “always did act as though the house was not quite his, nor the family for that matter.”

Sylvie, Lila, and Jack share an unwillingness to embody a place and make it their own; they are transient, “shallow rooted.” It is antithetical to their peripatetic solitariness to feel connected to a home. Doing so would invite emotional ties to others might hurt them.

Being alone, always on the outside, perpetuates Jack’s self-narrative of his harmful nature, a professed and inflated badness that appears, at times, like an affectation of depravity. His frustrated need to be subjected to terrible punishment and suffer consequences commensurate with his evil, fuels Jack’s doubt in God’s existence: what kind of God would refrain from inflicting his harshest reckoning upon a sinner like Jack? Faced with the void presented by either God’s inaction or non-existence, Jack believes he has no choice but to forever punish himself. It is a tribute to Robinson’s affecting portrait of her flawed and questioning hero that readers will be ready to do what her hero cannot—forgive Jack.

Lori Feathers is a freelance book critic who lives in Dallas, Texas. She authors the essay series “In Context” for Literary Hub's Book Marks, as well as Words Without Borders‘ regular feature, “Best of the B-Sides.” Lori is a board member of the National Book Critics Circle, and her work appears in various online and print publications. She co-owns Interabang Books in Dallas, where she works as the store’s book buyer.
Share:
© LitHub | Privacy
%d bloggers like this: