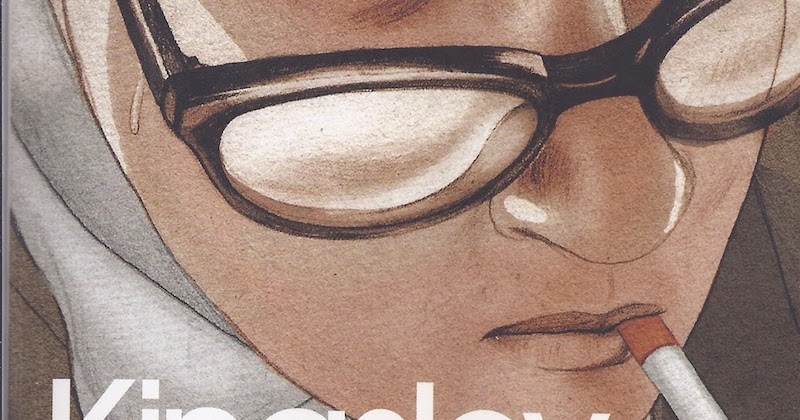 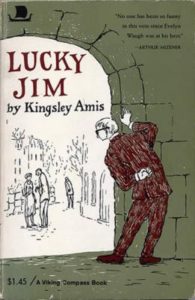 “If you can’t annoy somebody, there is little point in writing.”

“Written with the cool, detached, sardonic style which is the trademark of the British satirical novelist, Lucky Jim is funny in something approaching the Wodehouse vein, but it cuts a bit deeper.

Jim Dixon, Mr. Amis’ protagonist, is an amiable and irreverent opportunist who has found himself, after the war, in the improbable role of an instructor in medieval history in a minor British college. He is a medievalist solely because the course had been a soft touch in his own college days, and when he applied for a job ‘it looked better to be interested in something specific.’ 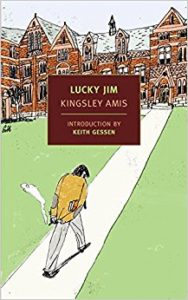 “The academic life is sketched in a kind of hilarious hatred through Dixon’s eyes. For him it is no more than a running duel with his superior, Professor Welch, a continual speculation as to whether he will be dropped at the year’s end or continued on probation for another year. He is trapped in the social orbit of the Welches, whom he loathes, and it is upon the Professor’s set that Mr. Amis concentrates his fire.

The Welches are the are the arty week-end type, ‘the home-made pottery crowd, the organic husbandry crowd, the record-playing crowd.’ The Professor’s painter son, Bertrand, the classic fashionable poseur, becomes the implacable foe of Jim over the matter of attentions paid to the blond Christine Callaghan. Jim is entangled stickily with Margaret Peel, a leech-like colleague, who has caught him in that worst of nets by making him the confidant of her extremely complex emotional troubles. 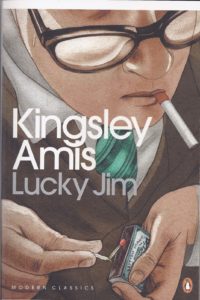 “In such high points as the cultural week-end, the summer ball, and Dixon’s catastrophic public lecture on Merrie England, Mr. Amis gives us top-drawer comedy. His prevailing mood is much like that of Jim Dixon who, when he finished preparing the pompous peroration of his lecture, ‘got up from the chair where he’d been writing this and did his ape imitation all around the room.’ ”