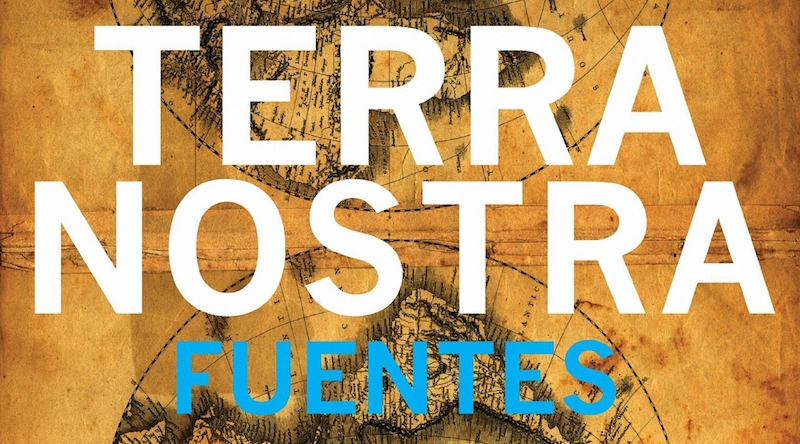 "If Terra Nostra is a failure, it is a magnificent failure" 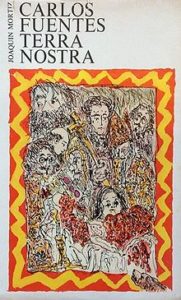 Incredible the animal that first dreamed of another animal.

“Deep within, while writing this book, Carlos Fuentes seems to sense that he might be making a mistake. Terra Nostra‘s axial event is the construction of the Escorial, Spain’s 16-century monastic palace and royal mausoleum near Madrid. Its builder is the Spanish King Felipe II, El Señor, who has withdrawn in revulsion from the obscene disorder of the secular world in order to enclose himself forever in its national monument to established perfection, immutable revelation, and death.

Fuentes clearly does not himself believe in such grand ambitions. He sees the ascetic retreat needed to realize them as perverse and self-destructive, their goals as illusory, pretentious and even dangerous. Besides, it can get pretty dark and cold inside these granite walls: ‘Perfect order,’ he says, ‘is the forerunner of perfect horror.’ To such pantheons, he here opposes gardens, to the whip, the seed; to uniformity, diversity; to changeless eternity, the ceaseless flow of human time in which anything is possible, nothing beyond belief. He dreams of an earth in a state of constant renewal, without political oppression, sexual prohibitions, plagues or gods. And without the finality (the ‘arrogant will for extinction’) of monuments. 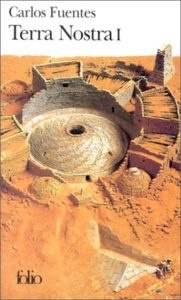 “Yet, sooner or later, the irony must have hit him, he was himself into just such an undertaking. Terra Nostra is a colossal 350,000-word opus, a kind of panoramic Hispano-American creation myth, spanning 20 centuries (more, if you count the Greek and Egyptian mythologies that help to feed it) and embracing virtually the whole of European and American (especially Mexican) culture and civilization. In mass, rigidity of design, hostility toward individual character, doctrinal devotion and seignorial hubris, the making of Terra Nostra parallels the laborious construction of the Escorial, and like Felipe’s necropolis, the book seems largely to have been a labor more of duty than of love.

Carlos Fuentes is a world-famous author, serious, provocative, controversial even, inventive, widely considered Mexico’s most important living novelist, maybe the greatest ever—but the world is full of doubters and perhaps Fuentes wished to silence them once and for all, burying them under the sheer weight and mastery of his book. More likely, though, it is the familiar case of a committed and conscientious writer being overtaken and captured by his own metaphor. From his earliest stories, Fuentes has always aspired to instructive all-embracing overviews, especially historical and mythical overviews (he is as much a Hegelian and Jungian—not to mention a Cleanser of the Temple—as a Marxist) that might explain once and for all what it means to be a Mexican; and he has always been willing to take any risk. So, if the ultimate metaphoric set occurred to him, how could he refuse to pursue it? 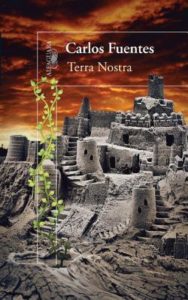 “All of which suggests, I hope, that if Terra Nostra is a failure, it is a magnificent failure. Its conception is truly grand, its perceptions often unique, its energy compelling and the inventiveness and audacity of some of its narrative maneuvers absolutely breathtaking; the animated paintings, the talking mirrors, the time machines and metamorphosing mummies, the fusion of history, myth and fiction (see, for example, the brilliant interlacing of the betrayal ‘Rebellion’ in Part III with the historical uprising of the Spanish comuneros), the variations on themes and dreams, the interweaving or rich, violent, beautiful, grotesque, mysterious, even magical images—not without reason has this book been likened to a vast and intricate tapestry.

And above all there is Fuentes’s highly personalized use of the second person. It was in Fernando de Rojas’s ‘La Celestina’ (‘The Spanish Bawd’), a work that stands at the end of Renaissance conventions and heralds the dawn of the Spanish Golden Age and thus of most modern literature as well, that the second person was rediscovered. In it, for the first time in centuries, people stopped talking to the world at large and started talking to each other. ?Tu y yo. You and me. Not just images evoked in the back of the mind, but a tangible filling of the real space between speaker and listener. And here in Terra Nostra, appropriately, it is a mysterious, paradoxical spirit named Celestina (in fact there are several Celestinas, some actually overlapping each other—her magic memory marks are tattooed lips and gray eyes) who mediates both the tumble into history and the final ecstasy, and who has the largest claim to being the book’s central narrator. 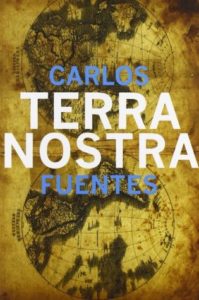 “But Fuentes’s second person is not one overheard on a stage: the book itself, rather than the author or a character, becomes the speaker, the reader or listener a character, or several characters in succession. ‘Here roles are reversed,’ Valerio Camillo tells the student Ludovico, while showing off his Theater of Memory. ‘You, the only spectator, will occupy the stage. The performance will take place in the auditorium.’ The reader, then, becomes—together with the author—the Adept, playing the roles within the story that help them to learn together, watched by the book that reads them. ‘I shall create an open book where the reader will know he is read and the author will know he is written,’ says the Chronicler who, like Ulysses, aspires from beginning to end to achieve ‘the impossible: a perfectly simultaneous narration.’ Achieved or not, there are too few writers around even willing to risk the impossible, and none I know of who so intimately activates the otherwise dead space between page and reader.”