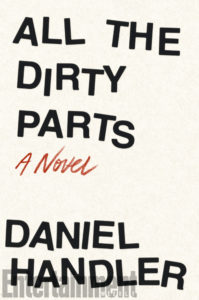 “Handler’s new novel couldn’t be more unlike the books he wrote under his famous pseudonym. A Series of Unfortunate Events was marked by Handler’s winkingly ornate prose and neo-gothic whimsy; All the Dirty Parts is spare, stripped down and devoid of anything twee. It’s a fascinating, profane book that somehow succeeds on its own merits … It’s an interesting experiment: The reader is left to connect the dots, to fill in the parts of the story that Cole has elided for not being sufficiently sexual. Handler drops just enough hints for us to do just that, and the portrait that results is quietly heartbreaking, though often hilarious … It’s difficult to create a fully formed character with the strictures Handler has imposed on himself, narrative fragments from a sex-obsessed high school student. But Cole turns out to be a multifaceted character. It helps that Handler perfectly captures the staccato rhythm of teen-speak; none of the dialogue comes off as inauthentic at all … Handler doesn’t condescend to his young characters, and he doesn’t offer any easy lessons. All the Dirty Parts is a shockingly original novel…Parents of teenagers might be wary of the language and content, but it deserves to be read widely, and not just by adults — it’s one of the most original and realistic depictions of the sex lives of young people to come around in a long time.”