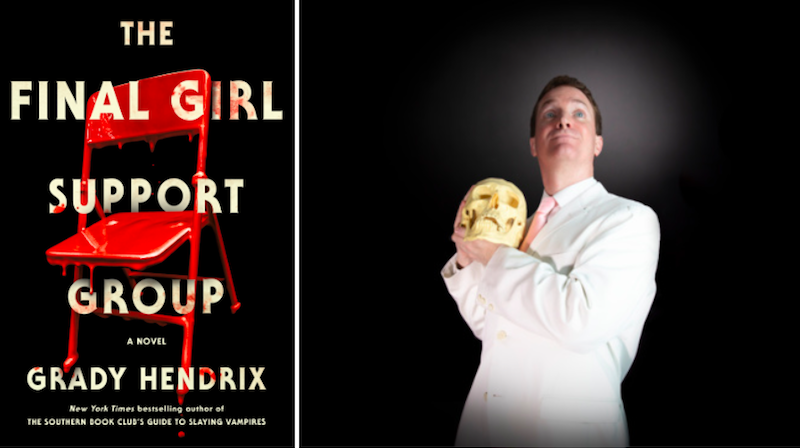 Grady Hendrix on True Grit, Skippy Dies, and We Have Always Lived in the Castle

This week, we spoke to the author of The Final Girl Support Group, Grady Hendrix.

Grady Hendrix: Robert the Rose Horse by Joan Heilbroner was my jam. I loved it so much that my local librarian kept a copy behind the front desk for me because I would flip out if it wasn’t there.

GH: Every year or so I re-read Charles Portis’s True Grit and every year or so I wonder what all the debate is about: this is clearly THE Great American Novel of the 20th Century. The movies don’t even come close.

GH: Stephen Graham Jones’ My Heart is a Chainsaw is his final girl book and it comes out a few weeks after mine. We didn’t read each other’s books until we were finished writing our own, but they are two radically different takes on the same subject.

GH: Mike Nichols: A Biography because every now and then the writer would drop a line out of the blue like “By now, Nichols’ crack cocaine addiction was out of control.” And I’d think, “Wait, what?” Where was a posh, upper class Broadway director getting crack? Did someone bring it to a party and was all, “If you like coke, you’ll love this?” Who was his dealer? Did they watch his movies? Every now and then I just stop in the middle of my day and think about Mike Nichols’s crack dealer criticizing his directorial choices in Regarding Henry and I get goose bumps.

GH: Oyinkan Braithwaite’s My Sister, The Serial Killer. I don’t know a thing about Nigerian literature but all I can think now is, “More, please.”

GH: Austin Grossman’s You is the most beautiful book about video games I’ve ever read, and I’m not even much of a gamer. I’ve gone back and re-read the ending again and again and it punches me in the tear ducts every time.

GH: Sarah Langan’s Good Neighbors has teenaged characters that I wish I’d written and Anna Wiener’s Uncanny Valley was an addictive account of how the tech bros live that I read with wonder and horror.

GH: Malachai Black’s On My Honor looks like a Boy Scout slasher to the naked eye, but then you read about this Scoutmaster who’s “grooming” his Scouts and taking them into his tent late at night and you think “Okay, it’s a pedo book” but then it takes a turn and reveals that the Scoutmaster is actually a hitman who murders his targets using hypnotized Boy Scouts and it’s the best, most cathartic laugh I had in 2021.

GH: Shirley Jackson’s We Have Always Lived in the Castle. I’d read and really liked The Haunting of Hill House but I had a prejudice against Castle because our local community theater did the stage production and I thought that meant it was too bougie for me. Little did I know that I was an asshole. It’s such a great book and I feel like it should be mandatory for every 13 year old to read it.

GH: I try really, really hard not to give books as gifts. They never read it and I always feel sad.

GH: Why hate a book? What did it ever do to you?

GH: One Hundred Years of Solitude. I keep starting it and putting it aside and saying “Next summer.”

GH: Sex scenes make me blush too hard to read. I can’t do it. Although I will say that the weirdest and most unpleasant sex scenes I ever read were in the Wild Cards books edited by George R.R. Martin. They were mosaic novels set in a world where people had superpowers and I loved them as a kid. Then around the fifth one they started getting really raunchy and weird culminating in a bizarre scene where someone forcibly impregnated his grandfather whose mind was trapped inside the body of a woman. I kind of put them aside after that.

GH: Every couple of years I re-read Charles Willeford’s Hoke Moseley novels (Miami Blues, Sideswipe, New Hope for the Dead, and The Way We Die Now) because they’re like Elmore Leonard novels turned up to 11. The writing has a totally flat emotional affect to it, where discovering a corpse takes on the same weight as picking out a pair of pants, that I find hypnotic.

GH: I’ve got two. Iain Pears’s Dream of Scipio unfolds in three time periods and I had no idea what it was about until it all came together at the end and blew the top of my skull off. Paul Murray’s Skippy Dies is probably the greatest high school novel ever written and I will fight anyone who disagrees.

GH: My English teacher, Erica Lesesne, would let me read stuff outside the curriculum since I’d read a lot of the assigned reading already, and one of the books was John Noone’s The Man With the Chocolate Egg, a hallucinatory long dark night of the soul about a discharged British soldier walking around London with a live hand grenade wondering where he was going to pull the pin. The language in that book is so heady and dense and dank, like Peter Ackroyd swallowing Ramsey Campbell alive.

GH: I’m working my way through Robert Walker’s inadvertently hilarious serial killer novels about Chicago medical examiner, Dr. Dean Grant (Dying Breath, Razor’s Edge, Dead Man’s Float, Burning Obsession). The killers are absolutely over-the-top (a hairy midget with a bald spot who scalps his victims trying to make the perfect toupee’ when he’s not lashing his brother with a bullwhip woven from human hair) but the real joy comes from the details of the forensic science that I think Walker just made up. They’re so ludicrous and great that they totally deconstruct the whole FBI profiler trope without even intending to.

GH: John Bellairs’ first three New Zebedee books: The House with a Clock in Its Walls, The Figure in the Shadows, and The Letter, the Witch, and the Ring. They trafficked in a fabulous kind of Midwestern gothic while also managing to be genuinely scary. Ignore the movie and all the books that came after. These three are the real deal, pure and undiluted.

GH: I don’t understand why HBO hasn’t made a series based on Chester Himes’s Grave Digger Jones and Coffin Ed books. The Wire set in 1950s Harlem where the Bubbles character is a cross-dressing heroin addict who lives as a nun and wields a mean straight razor. I thought for sure in the wake of Black Lives Matter there would be a gold rush on Himes’s books because they’re so good and deal with race, crime, and American history in a really vital way, but I guess not.

Grady Hendrix is an award-winning novelist and screenwriter living in New York City. He is currently adapting his first novel, Horrorstör, about a haunted IKEA, into a feature for New Republic (1917) with Aperture Entertainment (My Friend Dahmer) to produce. His other novels include My Best Friend’s Exorcism, We Sold our Souls, and this year’s New York Times bestseller The Southern Book Club’s Guide to Slaying Vampires, which is being adapted into a series by Amazon Studios. Grady also authored the Bram Stoker Award-winning nonfiction book, Paperbacks from Hell, a history of the horror paperback boom of the ‘70s and 80s. Hendrix is repped by JaBberwocky, Aperture Entertainment, and Gang Tyre. Find out more about Hendrix online at gradyhendrix.com.