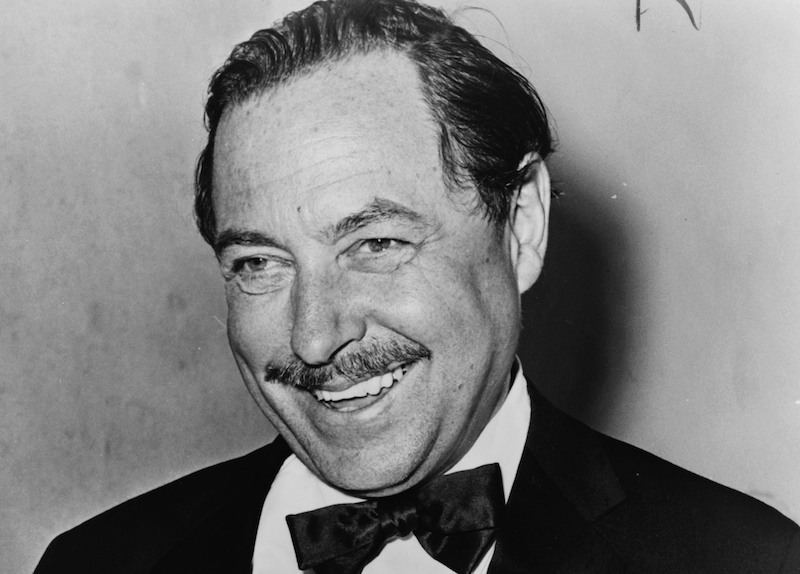 Gore Vidal on Sex, Capote, and the Pope in Tennessee Williams' Memoirs 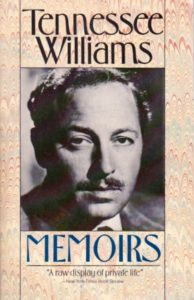 If I got rid of my demons, I’d lose my angels

“I particularly like New York on hot summer nights when all the…uh, superfluous people are off the streets.” These were, I think, the first words Tennessee addressed to me; then the foggy blue eyes blinked, and a nervous chuckle filled the moment’s silence before I said whatever I said.

“I am pleased that I can remember so clearly my first meeting with the Glorious Bird, as I almost immediately called him for reasons long since forgotten (premonition, perhaps, of the eventual take-off and flight of youth’s sweet bird?). Usually, I forget first meetings, excepting always those solemn audiences granted by the old and famous when I was young and green.

“It is hard now to realize what a bad time of it Tennessee used to have from the American press. During the Forties and Fifties the anti-fag battalions were everywhere on the march. From the high lands of Partisan Review to the middle ground of Time magazine, envenomed attacks on real or suspected fags never let up. A Time cover story on Auden was killed when the managing editor of the day was told that Auden was a fag. From 1945 to 1961 Time attacked with unusual ferocity everything produced or published by Tennessee Williams. ‘Fetid swamp’ was the phrase most used to describe his work. But in time, all things will come to pass. The Bird is now a beloved institution.

Today, at sixty-four, Tennessee has the same voracious appetite for work and for applause that he had at twenty-four. More so, I would suspect, since glory is a drug more addictive than any other as heroes have known from Achilles on. 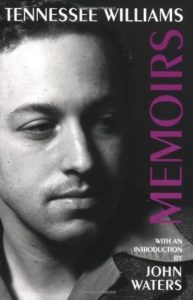 “I have never known any writer with the exception of the artistically gifted and humanly appalling Carson McCullers who cared so much about the opinion of those condemned to write for newspapers. Uneasily confronting a truly remarkable hunger for absolute praise and total notice, Tennessee admits that, when being interviewed, he instinctively ‘hams it up in order to provide “good copy.” The reason? I guess a need to convince the world that I do indeed still exist and to make this fact a matter of public interest and amusement.’

“Most beautifully, the plays speak for themselves. Not only does Tennessee have a marvelous comedic sense but his gloriously outrageous dramatic effects can be enormously satisfying. He makes poetic (without quotes) the speech of those half-educated would-be genteel folk who still maintain their babble in his head. Only on those rare occasions when he tries to depict educated or upper-class people does he falter. Somewhat reproachfully, he told me that he had been forced several times to use a dictionary while reading Two Sisters.

“In the Memoirs Tennessee tells us a great deal about his sex life, which is one way of saying nothing about oneself. Details of this body and that body tend to blur on the page as they do in life. Tennessee did not get around to his first homosexual affair until he was well into his twenties, by which time he had achieved several mature as well as sexually meaningful and life-enhancing heterosexual relationships. Except he wasn’t really all that enhanced by these ‘mature’ relationships. Lust for the male set his nerves to jangling. Why was he such a late-developer? Well, this was close to half a century ago, and Tennessee was the product of that Southern puritan environment where all sex was sin and unnatural sex was peculiarly horrible.

I think that the marked difference between my attitude toward sex and that of Tennessee made each of us somewhat startling to the other. I never had the slightest guilt or anxiety about what I always took to be a normal human appetite. He was—and is—guilt-ridden, and although he tells us that he believes in no after-life, he is still too much the puritan not to believe in sin. At some deep level Tennessee truly believes that the homosexualist is wrong and that the heterosexualist is right. Given this all-pervading sense of guilt, he is drawn in both life and work to the idea of expiation, of death. 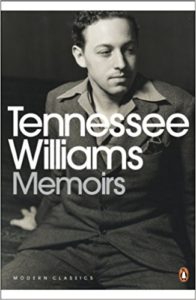 “Back to 1948: ‘In those days Truman was about the best companion you could want,’ writes Tennessee. ‘He had not turned bitchy. Well, he had not turned maliciously bitchy. But he was full of fantasies and mischief.’ That summer Capote arrived in Paris where Tennessee and I were staying at the Hôtel de l’Université (‘A raffish hotel but it suited Gore and me perfectly as there was no objection to young callers’), and Capote would keep us entranced with mischievous fantasies about the great. Apparently, the very sight of him was enough to cause lifelong heterosexual men to tumble out of unsuspected closets. When Capote refused to surrender his virtue to the drunken Errol Flynn, ‘Errol threw all my suitcases out of the window of the Beverly Wilshire Hotel!’ I should note here that the young Capote was no less attractive in person than he is today.

When Tennessee and I would exchange glances during these stories, Capote would redouble his efforts. Did we know that Albert Camus was in love with him? Yes, Camus! Madly in love.

“There have been complaints that these Memoirs tell us too much about Tennessee’s sex life and too little about his art. Personally, I find the candor about his sex life interesting if not illuminating. At the worst, it will feed that homophobia which is so much a part of the national psyche. Yet perhaps it is better to write this sort of thing oneself rather than leave it to others to invent.

“Tennessee’s much publicized conversion to Roman Catholicism took place during the time of his great confusion. Shortly after the Bird was received into the arms of Mother Church, a Jesuit priest rang him up and asked if he would like an audience with the Pope? a meeting with the head of the Jesuit order? Oh yes. Yes! Tennessee was delighted. The next morning the priest arrived to take Tennessee to the Vatican where, presumably, the Pope was waiting on tenterhooks to examine the Church’s latest big haul. Unfortunately, Tennessee had forgotten all about the audience. He would have to beg off, he said; he was just not up to the Pope that day. The priest was stunned. The Pope’s reaction has not been recorded. 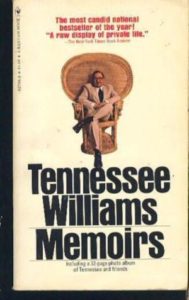 “‘I need,’ Tennessee writes with sudden poignancy, ‘somebody to laugh with.’ Well, don’t we all, Bird? Anyway, be happy that your art has proved to be one of those stones that really did make it to Henge, enabling future magicians to gauge from its crafty placement not only the dour winter solstice of our last days but the summer solstice, too—the golden dream, the mimosa, the total freedom, and all that lovely time unspent now spent.”