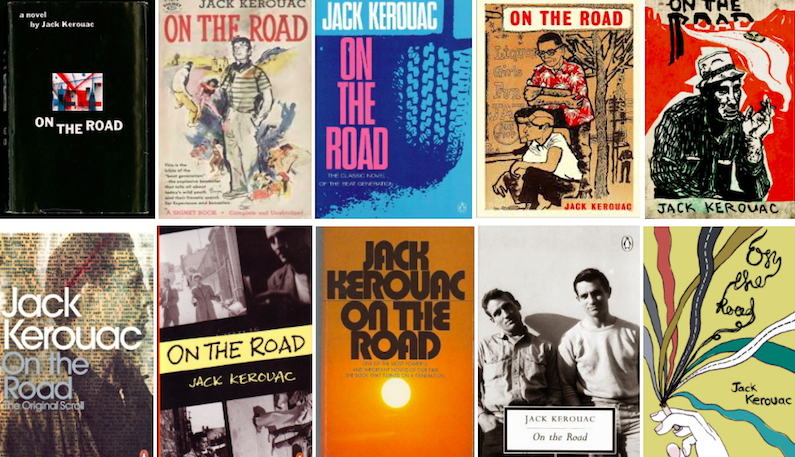 Go Moan for Man: Jack Kerouac's On the Road

On what would have been his ninety-sixth birthday, we look back at what the critics wrote about Kerouac's generation-defining 1957 road trip novel 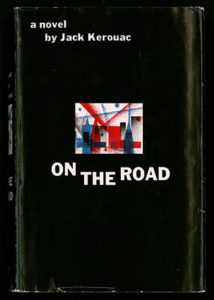 “…the only people for me are the mad ones, the ones who are mad to live, mad to talk, mad to be saved, desirous of everything at the same time, the ones who never yawn or say a commonplace thing, but burn, burn, burn like fabulous yellow roman candles exploding like spiders across the stars…”

“On the Road is the second novel by Jack Kerouac, and its publication is a historic occasion in so far as the exposure of an authentic work of art is of any great moment in an age in which the attention is fragmented and the sensibilities are blunted by the superlatives of fashion (multiplied a millionfold by the speed and pound of communications).

This book requires exegesis and a detailing of background. It is possible that it will be condescended to by, or make uneasy, the neo-academicians and the ‘official’ avant-garde critics, and that it will be dealt with superficially elsewhere as merely ‘absorbing’ or ‘intriguing’ or ‘picaresque’ or any of a dozen convenient banalities, not excluding ‘off beat.’ But the fact is that On the Road is the most beautifully executed, the clearest and the most important utterance yet made by the generation Kerouac himself named years ago as ‘beat,’ and whose principal avatar he is.

Just as, more than any other novel of the Twenties, The Sun Also Rises came to be regarded as the testament of the ‘Lost Generation,’ so it seems certain that On the Road will come to be known as that of the ‘Beat Generation.’ There is, otherwise, no similarity between the two: technically and philosophically, Hemingway and Kerouac are, at the very least, a depression and a world war apart.

“There are sections of On the Road in which the writing is of a beauty almost breathtaking. There is a description of a cross-country automobile ride fully the equal, for example, of the train ride told by Thomas Wolfe in Of Time and the River. There are details of a trip to Mexico (and an interlude in a Mexican bordello) that are by turns, awesome, tender and funny. And, finally, there is some writing on jazz that has never been equaled in American fiction, either for insight, style or technical virtuosity. On the Road is a major novel.” 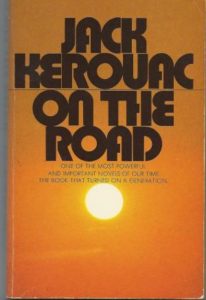 “Dean is the more important character. Mr. Kerouac makes considerable play with his disorderly childhood, his hitch in the reform school, and his rootlessness, but his activities seem less a search for stability than a determined pursuit of euphoria. Dope, liquor, girls, jazz, and fast cars, in that order, are Dean’s ladder to nirvana, and so much time is spent on them that it is hard to keep track of any larger pattern behind all the scuttling about.

The trouble is a matter of repetition. Everything Mr. Kerouac has to tell about Dean has been told in the first third of the book, and what comes later is a series of variations on the same theme. It’s a good theme—the inability of a young man of enormous energy, considerable intelligence, and a kind of muddled talent for absorbing experience to find any congenial place for himself in organized society—but the variations are all so much alike that they begin to cancel each other out.

However, the novel contains a great deal of excellent writing. Mr. Kerouac has a distinctive style, part severe simplicity, part hep-cat jargon, part baroque fireworks. He uses each of these elements with a sure touch, works innumerable combinations and contrasts with them, and never slackens the speed of his narrative, which proceeds, like Dean at the wheel, at a steady hundred and ten miles an hour.

The book is most readable. It disappoints because it constantly promises a revelation or a conclusion of real importance and general applicability, and cannot deliver any such conclusion because Dean is more convincing as an eccentric than as a representative of any segment of humanity.” 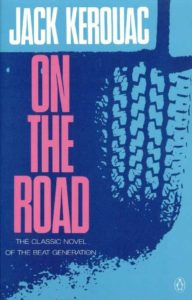 “Jack Kerouac, an American writer who touches base in San Francisco when he has nowhere else to go, has written a novel called On the Road which may set a new style. The most obvious characteristic of this style may be roughly approximated by anybody with a fairly large vocabulary, plenty of paper and a willingness to let himself go. Not many of his imitators will be successful, however, because not many are so easily intoxicated by raw experience as Mr. Kerouac. Even fewer will have the same instinctive urge to free articulation or the feeling for wild metaphors. They will try it, though, I am sure: and the results will be dreadful.

“On the Road, I must say, is fascinating for at least a hundred pages because of its exuberance, and certainly one must credit the author with a kind of wild poetic gift. I should add, too, that it’s not a sordid story despite the amoral behavior of its characters. On the contrary it is singularly innocent, if not actually naive.

Kerouac is supposed to be the spokesman of the ‘beat’ generation. Who beat them and why is not clear. Nothing is clear except an irresistible urge to live up and keep moving. His immersion in the sensations of the moment might be described as a homespun, American-type existentialism. His writing, like the behavior of his characters, is full of a provocative sound and fury but with about as much philosophical meaning as a Sears-Roebuck catalogue.” 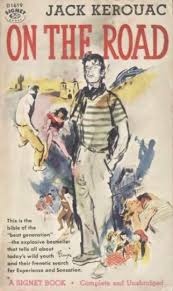 “The story is set in the late 1940s, told in the first person by Sal Paradise, a budding writer given to ecstasies about America, hot jazz, the meaning of life, and marijuana. The book’s protagonist is Dean Moriarty (‘a sideburned hero of the snowy West’), who has spent a third of his waking time in poolrooms, a third in jail, a third in public libraries, and is always shouting ‘Yes, yes, yes!’ to every experience. Dean and Sal and their other buddies—Carlo Marx, the frenzied poet; Ed Dunkel, an amiable cipher; Remi Boncoeur, who has the second loudest laugh in San Francisco—are forever racing cross-country to meet one another. Their frantic reunions are curiously reminiscent of lodge and business conventions, with the same shouts of fellowship, hard drinking, furtive attempts at sexual dalliance—and, after a few days, the same boredom.

Then Sal’s pals are off again, by bus, on foot, by thumb, roaming the continent, feeling the wind of Wyoming nights and the heat of Texas days, looking for Moriarty’s never-to-be-found father or anyone’s sister, always expecting the ultimate in music or love or understanding around the next bend in the road. Excitement and movement mean everything. Steady jobs and homes in the suburbs are for the ‘squares.’

Dean Moriarty, a real gone kid in whom Sal sees traces of a ‘W. C. Fields saintliness,’ is the only authentic proletarian in a basically timorous band of bourgeois rebels. 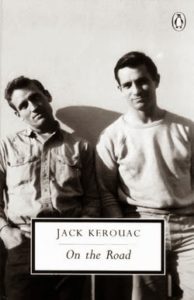 “Time is a key element in Jack Kerouac’s novel On the Road. ‘We know time,’ the protagonist Dean Moriarty (based on Kerouac’s friend Neal Cassady) mutters throughout the book, an invocation and a prayer.

That’s important for a couple of reasons: It signals the novel’s hunger for new experience, for a way out of the conformist pieties of post-World War II America, and also Kerouac’s desire to stare down the mortality that he feared. In some sense, this is the key to all his writing, the idea that by mythologizing his life and that of his friends he was somehow placing them all outside of time.

Time, however, catches up with everything, including On the Road. The book was published in 1957, and everyone in it is now dead. This raises the question of how we are to read it, as a historical document or as a vibrant piece of literature in its own right.

“For me, Kerouac’s peripatetic masterpiece remains powerful precisely because it exists so much in the moment: restless, rootless, even (in some fundamental fashion) shapeless, the road trips it describes compulsive, as if in the sheer act of movement, we might find ourselves most alive.

“[Kerouac] was a romantic, so besotted by what he’d been through that it was as if no one had ever felt the way he did.

This, of course, is what writers do; as F. Scott Fitzgerald observed in the 1930s, ‘We have two or three great moving experiences in our lives—experiences so great and moving that it doesn’t seem at the time that anyone else has been so caught up and pounded and dazzled and astonished and beaten and broken and rescued and illuminated and rewarded and humbled in just that way ever before.’ With Kerouac, however (like Fitzgerald), those experiences have become so iconic that they are no longer completely his.

Even when I first read On the Road, as a teenager in the 1970s, the core of its action—driving, talking, smoking dope, listening to music—was what my friends and I did every day. It took me years to understand what the book was getting at, which is the bittersweet ephemerality of everything, the idea that to ‘know time’ is to know ourselves as at time’s mercy, which makes its frantic movement less exuberant than desperate.

That is Kerouac’s message, the message at the heart of all his fiction, made explicit by the ancient hitchhiker who, late in the novel tells Sal to ‘Go moan for man.’ ”