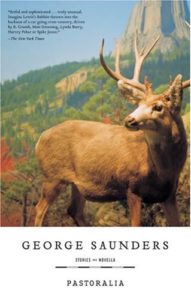 “A decrepit theme park where workers are paid to act like cavemen by grunting, drawing crude pictures, and catching imaginary bugs all day, with the occasional goat dropped down ‘The Big Slot’ for dinner. A self-help seminar that claims the road to true happiness begins by shirking responsibilities to your needy, suffocating loved ones. A substandard apartment complex where illiterates spend their evenings watching TV shows such as the reality-based How My Child Died Violently and The Worst That Could Happen, a program of computer-generated tragedies. Needless to say, George Saunders takes his place in a long queue of American pessimists, but few can claim a vision as corrosive and bleakly funny as the one on display in Pastoralia, a story cycle set in a hellish wasteland of late capitalism. 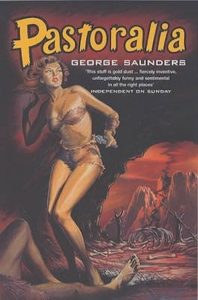 Boasting a spare, economical prose style, Saunders takes snapshots with a cracked lens, only slightly distorting the worst images he can find. In a country weaned on corporate code, where long hours are wasted on petty bureaucracy and busywork, the theme park in the masterful title story has a ring of familiarity. While few jobs can approach the indignity of weeks hooting in Neanderthal garb, the dreary punch-clock routine that beats down the narrator and his disgruntled partner are universal. With the park in dire financial straits, workers find fewer goats slipped down The Big Slot—they’re forced to subsist on ‘Reserve Crackers’—and their paychecks are docked for pick-up service on their ‘mutual big pink Human Refuse bags.’ 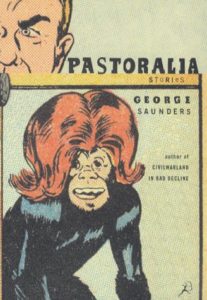 Other stories are equally grim but more internalized: ‘Winky’ concerns an ineffectual wimp who puts himself through a New Age seminar just to confront his sister, and in ‘The Barber’s Unhappiness,’ a middle-aged slouch still living with his mother ogles passing women, then concocts wild scenarios to avoid approaching them. Saunders’ characters are unhealthy, uneducated, and hopeless, yet he reserves sympathy and affection for them, his satiric venom generally saved for larger targets. The collection’s brilliant centerpiece, ‘Sea Oak,’ is also the darkest, an urban horror story set in a dank apartment replete with ‘an ad hoc crackhouse in the laundry room,’ brass knuckles in the kiddie pool, and microwaved meat nuggets in sugary sauce. When a chipper old aunt dies of fright—due to money problems, she’s buried in a cardboard coffin—she returns from the grave to shock her poor family out of complacency. Typical of Pastoralia, even the undead can’t catch a break.”