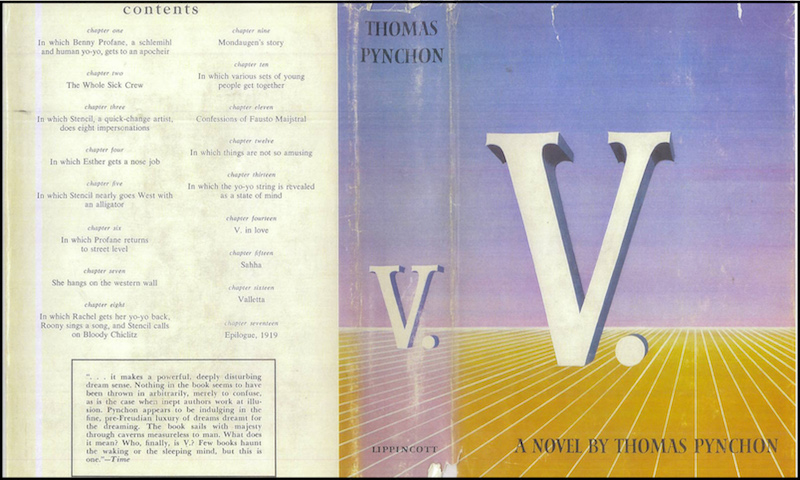 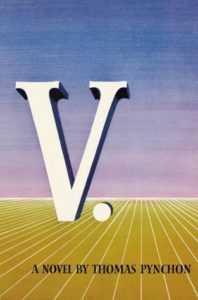 Life’s single lesson: that there is more accident to it than a man can ever admit to in a lifetime and stay sane.

“Since the war a category of the American novel has been developed by a number of writers: American picaresque one might call the archetype, and its more notable practitioners would include Saul Bellow with The Adventures of Augie March,  Jack Kerouac, On the Road, Joseph Heller, Catch-22, Clancy Sigal, Going Away,  and Harry Matthews, who last fall produced a generally overlooked though brilliant novel entitled Conversions. The genus is distinguished by what the word ‘picaresque’ implies — the doings of a character or characters completely removed from socio-political attachments, thus on the loose, and, above all, uncommitted.

Such novels are invariably lengthy, heavily populated with eccentrics, deviates, grotesques with funny names (so they can be remembered), and are usually composed of a series of bizarre adventures or episodes in which the central character is involved, then removed and flung abruptly into another. Very often a Quest is incorporated, which keeps the central character on the move.
For the author, the form of the picaresque is convenient: he can string together the short stories he has at hand (publishers are reluctant to publish short-story collections, which would suggest the genre is perhaps a type of compensation). Moreover — the well-made, the realistic not being his concern — the author can afford to take chances, to be excessive, even prolix, knowing that in a work of great length stretches of doubtful value can be excused. The author can tell his favorite jokes, throw in a song, indulge in a fantasy or so, include his own verse, display an intimate knowledge of such disparate subjects as physics, astronomy, art, jazz, how a nose-job is done, the wildlife in the New York sewage system. These indeed are some of the topics which constitute a recent and remarkable example of the genre: a brilliant and turbulent first novel published this month by a young Cornell graduate, Thomas Pynchon. He calls his book V. 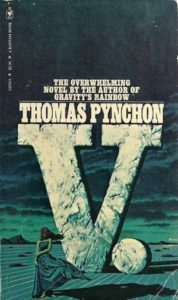 V. has two main characters. One of them is Benny Profane — on the loose in New York City following a Navy hitch and a spell as a road-laborer. Born in 1932, Profane is Depression-formed, and his function in the novel is to perfect his state of ‘schlemihlhood’ — that is to say being the victim, buffeted by circumstance and not caring to do much about it — resigned to being behind the 8-ball. Indeed, in one poolroom fracas the 8-ball rolls up to Profane, prostrate on the floor, and stares him in the eye. His friends are called the Whole Sick Crew, a fine collection of disaffected about whom one observer says ‘there is not one you can point to and say is well.’ Typical of them is the itinerant artist Slab, who calls himself a catatonic expressionist. Beset by a curious block he can only paint cheese danishes — Cheese Danish No. 56 is his subject at one stage of the book.
Set in contrast to Profane is a young adventurer named Stencil. He is active as opposed to passive, obsessed by a self-imposed duty which he follows, somewhat joylessly — a Quest to discover the identity of V., a woman’s initial which occurs in the journals of his father, a British Foreign Office man, drowned in a waterspout off Malta. The search for V., a puzzle slowly fitted together by a series of brilliant episodic flashbacks, provides the unifying device of the novel — a framework encompassing a considerable panorama of history and character. V., turning up first as a young girl in Cairo at the start of the century, reappears under various names and guises, invariably at times of strife and riot, in Florence, Paris, Malta, South Africa. Finally one finds her disguised as a Manichaean priest, trapped under a beam in a World War II bombing raid on Malta and being literally disassembled by a crowd of children. 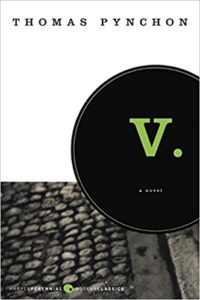 The identity of V., what her many guises are meant to suggest, will cause much speculation. What will be remembered, whether or not V. remains elusive, is Pynchon’s remarkable ability — which includes a vigorous and imaginative style, a robust humor, a tremendous reservoir of information (one suspects that he could churn out a passable almanac in a fortnight’s time) and, above all, a sense of how to use and balance these talents. True, in a plan as complicated and varied as a Hieronymus Bosch triptych, sections turn up which are dull — the author backing and filling, shuffling the pieces of his enormous puzzle to no effect — but these stretches are far fewer than one might expect.
Pynchon is in his early twenties; he writes in Mexico City — a recluse. It is hard to find out anything more about him. At least there is at hand a testament — this first novel V. — which suggests that no matter what his circumstances, or where he’s doing it, there is at work a young writer of staggering promise.”