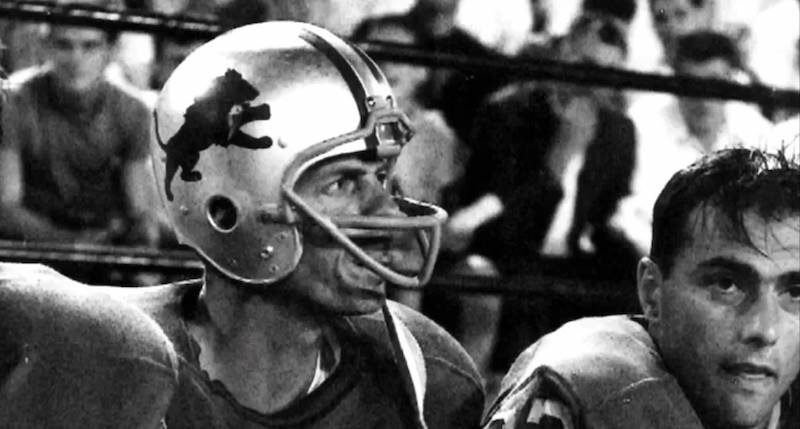 George Plimpton in the Lions' Den

On the 14th anniversary of his death, a 1967 New York Review of Books review of Paper Lion, Plimpton's iconic work of participatory sports journalism 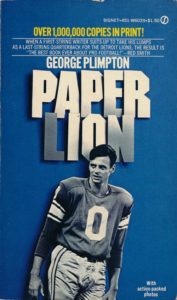 The pleasure of sport was so often the chance to indulge the cessation of time itself—the pitcher dawdling on the mound, the skier poised at the top of a mountain trail, the basketball player with the rough skin of the ball against his palm preparing for a foul shot, the tennis player at set point over his opponent—all of them savoring a moment before committing themselves to action.

“I’ve been to pro games, and I can’t help feeling that there is something fundamentally unsportsman-like about men, mostly oversize to begin with, strapping themselves into all that outlandish equipment and wearing cages to protect their faces, all for a game’s sake. It’s brutish. In the epilogue to Paper Lion, Plimpton writes:

Detroit had a bad season my year. The team finished fourth in its division…Injuries hurt their chances. Eleven of the first-line players were knocked out of the line-up with injuries, most of them on the defensive team. Joe Schmidt and Carl Bretschneider of the linebackers were crippled, and so were Yale Lary and Night Train Lane. Gary Lowe ruptured his achilles tendon…

If I have already made it abundantly clear that football isn’t exactly my game, then I must say that Paper Lion is at once a more satisfying and complex book than Out Of My League, wherein the writer unwinds the sometimes nightmarish story of how he came to pitch to an all-star line-up of National and American League players in the Yankee Stadium, the team with the most hits picking up a thousand dollars. 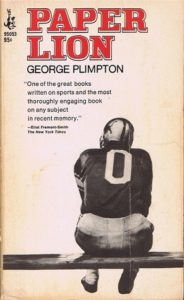 “Plimpton got Sports Illustrated to put up the pot. It was his notion, he told the editor, that he would pitch ‘not as a hotshot—that’d be a different story—but as a guy who’s average, really, a sort of Mr. Everybody, the sort who thinks he’s a fair athlete…’ If it worked out, he hoped to go on to play tennis with Pancho Gonzales, box with Archie Moore, play golf with Snead or Hogan, and so forth.

The writing in Out Of my League is fresh and observant, but it suffers from spinning out a one-day adventure into a book. It is original, there is much to admire, but I think it would have been better as a shorter piece, like John Updike’s splendid account of Ted Williams’s last day with the Boston Red Sox. Ultimately, the most memorable thing about Out Of My League is what I can only call the author’s chutzpah, his actually going through with it, imposing himself on the players and the unsuspecting crowd at the Yankee Stadium. Many of the players were indifferent, others were cold. With Plimpton floundering on the mound, Mantle yawns ostentatiously. But then we never really worry about the author’s pitching performance per se as we do, say, about Jim Brosnan’s good and bad days in The Long Season. Plimpton’s professional pride, unlike Brosnan’s, could never be truly involved. Neither is his livelihood.

We also do not fret about how Plimpton will stack up on the field as the Detroit Lion’s last-string quarterback, but from the moment he begins haphazard practice, whacking a football into an armchair in his apartment, until he is finally allowed to call five plays in an inter-squad scrimmage at Pontiac, Plimpton holds us with the force of sheer good writing. If he was, predictably, a disaster on the field, I can think of no other non-fiction book that evokes more successfully the special taste and feeling of a game and the men who play it. 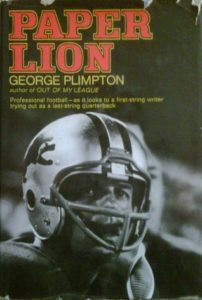 “From the moment of his arrival, Plimpton reveals a necessarily good and receptive nature and an enviable eye for detail. Of course he’s got a lot going for him. Even a run-through of some of the names on the Detroit roster has a distinctive tang to it: Milton Plum, Yale Lary, Nick Pietrosante, Dick LeBeau, Scooter McLean…as well as a linesman, nicknamed the Mad Creeper, who was, Plimpton writes, a near pathological case.

No one knew who the Mad Creeper was…His habit was to creep along the corridors late at night, three or four in the morning, sneak into someone’s room, lean over his bed and throttle him hard and briefly, just closing his hands around the fellow’s throat and then skittering off down the corridor, listening to the gasping behind him.

Plimpton seems to catch exactly the tension between rookie and veteran; the competition for jobs; the night of the team cut-offs; and the nerves that build up before a game, even an exhibition game.

Before Plimpton left to join the Lions, a friend in New York, who had once played for the Washington Redskins, warned him about the stupidity of ball players and told him to expect juvenile behavior. The barracks-room humor of the camp (water pistols, jock straps) does seem more than a bit overhearty at times, but Plimpton makes a convincing case for similar lapses among supposedly loftier groups, such as New Yorker staff writers; and I must admit that I found the fright masks funny. It seems that some nights the players would work off tensions by donning masks made of thin pliable rubber, vampire heads, Frankenstein monsters, and sneak up on a sleeping team mate to startle him. 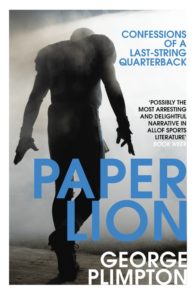 “Sports, obviously, is a bloody big business, a growth industry, as they say, with the National Hockey League expanding to twelve teams next season, new professional basektball and soccer leagues promised, and the purses offered on this year’s PGA circuit the highest ever. If the profits to be made out of sports are immense, just possibly immorally high, then club owners differ from the tycoons in other industries by asking for our hearts as well as our money. We are entreated to trust them with our boyish admiration and enthusiasm, with what we retain of the old school holler, at an age when we are more immediately concerned with falling hair, mortgages, and choosing schools for the kids. Going back through the years, I think the first time I felt socially betrayed, lied to by anyone outside my immediate family, was when I discovered that the Montreal Royals, my home baseball team, was not made up of natives but largely southern crackers. This, of course, was long before club owners had the courage to move their franchises about so cynically. Going wherever the biggest profits were.

Professional sports, though I am still addicted to them, have begun to alienate me in yet another way. It was George Plimpton’s notion that as a sort of Mr. Everybody, a Central Park quarterback, a Sunday pitcher, he would try his hand at baseball, football, and other sports. James Thurber, he told the editor of Sports Illustrated, once wrote that the majority of American males put themselves to sleep by striking out the batting order of the New York Yankees. Yes; but if at one time Plimpton’s idea of testing himself, seeing how well he could do in pro company, seemed a feasible, even charming conceit, I fear it is considerably less so today. If once athletes were really rather like us, only more beautifully made, better conditioned, more gifted, suddenly too many of them are not like us at all. Suddenly basketball players tend to be seven feet tall and football players weigh three hundred pounds. Then football, rather than most sports, has come to suffer from over-specialization, with different teams for offense and defense. In contrast it would seem that soccer players, all of them sixty-minute men, must be far more resourceful. They are certainly more elegant and recognizably human to watch, trotting out on to the field in jerseys and shorts, unarmed, so to speak. 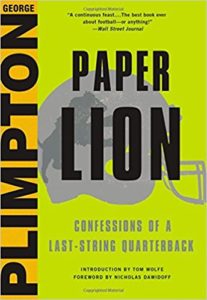 “Finally, George Plimpton’s Paper Lion joins a growing body of first-rate writing about sports; one thinks frequently of Norman Maller on the fights, Updike, and Mark Harris—but even then I have a reservation. Much as I enjoyed Plimpton’s book, I can’t help feeling guilty, like having been to a movie on a fine summer’s afternoon. An earlier generation of American writers had to test themselves not against Bart Starr and Archie Moore, but the Spanish Civil War and the Moscow trials. In Europe. Isaac Babel, looking for a change, rode with the Red Cavalry. George Orwell went to Wigan Pier and then Catalonia. Koestler came out of Spain with his Spanish Testament. This is not meant to be an attack on Plimpton, but on all of us, Plimpton’s generation and mine. One day, I fear, we will be put down as a trivial, peripheral bunch. Crazy about bad old movies, nostalgic for comic books. Our Gods don’t fail. At worst, they grow infirm. They suffer pinched nerves, like Paul Hornung, or arthritic arms, like Sandy Koufax.”