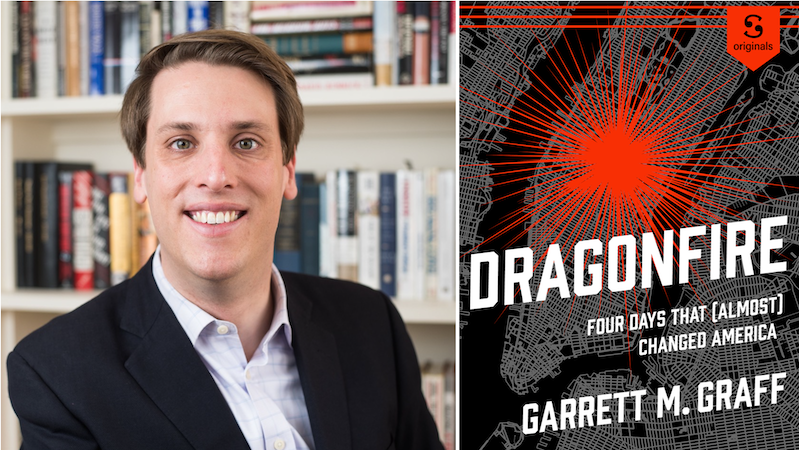 Rapid-fire book recs from the author of Dragonfire

This week, we spoke to the author of Dragonfire: Four Days That (Almost) Changed America, Garrett M. Graff.

Garrett M. Graff: The first “big” book I remember reading was the Hardy Boys, The Tower Treasure, but I fell in love early with history and nonfiction. I remember my first-grade teacher, Mrs. Stocek, telling me that she’d never met a student who liked history so much.

GMG: Unfortunately, I re-read almost nothing. There are just too many books out there. When we moved to Vermont from DC a half-dozen years ago, we moved nearly 5,000 pounds of books, and I’ve only amassed more since.

GMG: This new project, Dragonfire, actually builds upon my own history of the FBI and counterterrorism post-9/11, The Threat Matrix, which came out nearly a dozen years ago; this plot represents a few lines in that book, but has always stuck with me and so, as the kids might say, I came back to “double-click” on that paragraph a decade later and expand it into its own work.

GMG: The books that blow me away are usually mixtures of life and science. Lulu Miller’s Why Fish Don’t Exist: A Story of Loss, Love, and the Hidden Order of Life last year was a transformative reading experience, with a big twist, and Seven Brief Lessons on Physics, by the Italian physicist Carlo Rovelli, really rewrote my literal understanding of the world.

GMG: I normally read almost no fiction—almost all of my reading goes into “work reading,” but these last couple of weeks I’ve been so mentally overwhelmed and exhausted from life that I’ve been picking up fiction to try to let my mind relax a bit, so I just finished Kent Haruf’s Plainsong, which people have been telling me for years was excellent—and was.

GMG: I read George Packer’s biography of Richard Holbrooke, Our Man, last year, which deserved far more attention than it got, and it was just a master class in biography—just one of the most remarkable books I’ve ever read—a literary, rakish, and highly observant portrait of a unique, tough figure. But the two books I’ve read this year that I’ve thought more about since than any others are Heather McGee’s The Sum of Us and Clint Smith’s How the Word is Passed, both of which offer some powerful, poignant, and critical correctives to our understanding of our own history and how the story of American history isn’t as “free” or as linear as we like to tell ourselves. Eric Foner once said, “This history we were taught could not have produced the present we were living in,” and I think about that concept a lot. McGee and Smith both do an important job of reframing that history to help better account for our world today.

GMG: This might sound weird, but I’m actually a strong believer that no one ever reads a book at the wrong time. Every book is a conversation, and you meet a book wherever you are in your life.

GMG: Anne Lamott’s Bird by Bird is packed with wisdom and a book that I regularly give out to friends facing tough moments in life or their own writing.

GMG: I’m not sure it’s a “classic” but as someone who grew in a rural state, I knew J. D. Vance was the fraud he’s turned out to be as soon as I picked up Hillbilly Elegy.

GMG: This is quite the confession for a history geek like me, but I’ve never read Robert Caro’s The Power Broker.

GMG: Truthfully, I read very little with “sex”—see my previous comment about reading little fiction—but my beloved editor Jofie Ferrari-Adler launched a new imprint in the summer of 2019, Avid Reader Press, and its first book was Lisa Taddeo’s Three Women, which was an arresting tour of sexuality and its complicated role in our lives and society.

GMG: Frank Conroy’s Body and Soul was a hugely important book in my own development.

GMG: I don’t know whether I can say it was my favorite book of the entire century, but years after it came out, I remain awed by the beautiful writing in Casey Cep’s Furious Hours. It made me insanely jealous as a writer, because Casey unfurls page after page these sentences and turns of phrase more striking than anything I’ve ever been able to write.

GMG: Oh gosh—where to start? I grew up in a small town in a rural, heavily white state, so reading in my progressive high school was a huge part of opening my eyes to the world beyond and the scope of human experience. There’s a reason I thank a host of my teachers in the acknowledgements of each and every book I’ve written, including my AP English teacher, Kerrin McCadden, who in the years since has gone on to become a poet of some note herself. I read my first Zora Neale Hurston in high school, my first Toni Morrison, Elie Weisel, Steinbeck, and so many others, and in history class, we read Howard Zinn, which was the first time I remember being so intellectually challenged that the history we teach isn’t actually as simple as that.

GMG: Right now, we’re reading a lot—like several times a day—of Officer Buckle and Gloria with my daughter, but the household favorite is Dragons Love Tacos. We just celebrated, actually, our own dragon taco party on November 23rd, which is the date of the taco party at Robbie’s house. IYKYK.

GMG: My friend Jason Fagone wrote a fascinating biography, The Woman Who Smashed Codes, about Elizebeth Smith Friedman, the pioneering woman who basically invented the field of American cryptology. She deserves her own show, for sure.

Garrett M. Graff has spent nearly two decades covering politics, technology, and national security, helping to explain where we’ve been and where we’re headed. He is the former editor of Politico magazine and a regular contributor to Wired, CNN, NPR, PBS NewsHour, and the History Channel. Among Graff’s many books are The Threat Matrix: Inside Robert Mueller’s FBI and the national bestseller Raven Rock, about the government’s Cold War Doomsday plans. He is co-author of Dawn of the Code War, tracing the global cybersecurity threat, and author of the Scribd Original Mueller’s War, about Robert Mueller’s early career in the military. Graff’s most recent book, The Only Plane in the Sky: An Oral History of 9/11, was an instant New York Times bestseller. Compiling the voices of five hundred Americans as they experienced that tragic day, The Only Plane in the Sky was called “a priceless civic gift” by The Wall Street Journal and was named the 2020 Audiobook of the Year. His next book, Watergate: A New History, will be published in 2022. Graff is the host of Long Shadow, an eight-episode podcast series about the lingering questions of 9/11, and executive producer of While the Rest of Us Die, a Vice Media television series based on his book Raven Rock. 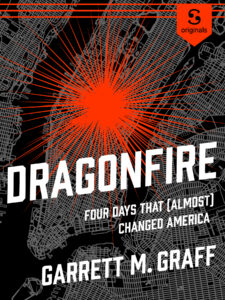