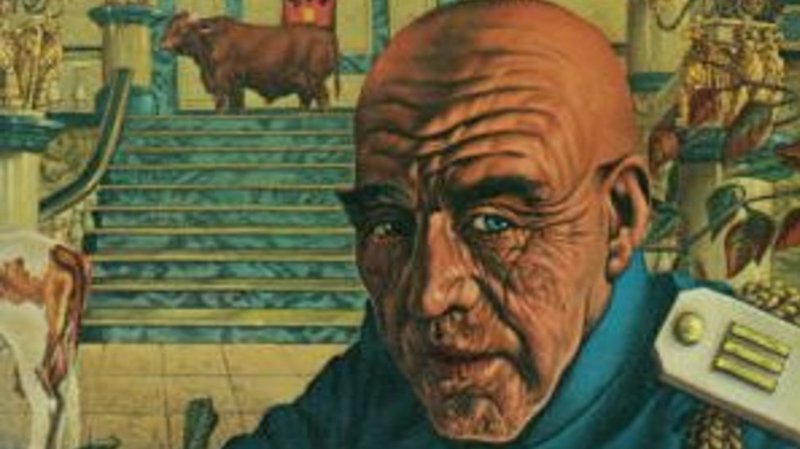 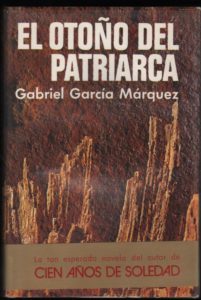 …he governed as if he felt predestined to never die…

“In 1968 when he began to write this majestic novel, Gabriel García Márquez told an interviewer that the only image he had of it for years was that of an incredibly old man walking through the huge, abandoned rooms of a palace full of animals. Some of his friends remember him saying as far back as 1958, when as a newsman he was witnessing the fall of Marcos Pérez Jiménez in Venezuela, that he would one day write a book about a dictator. He has since spoken of the influence of the life of the Venezuelan caudillo, Juan Vicente Gómez, on this book. He himself lived for years under the Rojas Pinilla dictatorship in his native Colombia. He covered the trial of a Batista butcher in the early days of Castro’s Cuban takeover. He lived in Spain during the interminable rattlings of Franco’s elusive death, when that country was a hospitable journey’s end for deposed Latin dictators.

He has added to these times of his own life fragments from the long history of dictators—the deaths of Julius Caesar and Mussolini, the durability of Stroessner, the wife-worship of Perón, what seems to be a close study of the times of Trujillo and the United States and English gunboat-puppeteering of so many bestial morons into the dictator’s palace. He has absorbed and re-imagined all this, and more, and emerged with a stunning portrait of the archetype: the pathological fascist tyrant. 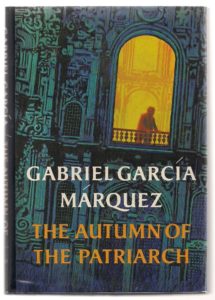 “And so his patriarch, the unnamed General (his precise rank is General of the Universe) of an unnamed Caribbean nation, lives to be anywhere between 107 and 232 years old, sires 5,000 children, all runts, all born after seven-month gestations. He is a bird woman’s bastard, conceived in a storm of bluebottle flies, born in a convent doorway, gifted at birth with huge, deformed feet and an enlarged testicle the size of a fig, which whistles a tune of pain to him every moment of his impossibly long life. The graffiti on the walls of the servants’ toilet give him oracular insight into traitorous cohorts, one of whom he serves roasted for dinner to a gathering of his generals.

He has such power that when he orders the time of day changed three to eight in the morning to deliver himself from darkness, the roses open two hours before dew time. His influence is so indelible that eventually his cows are born with his hereditary presidential brand. His venality such that he rigs the weekly lottery, using children under seven to draw the winning three numbers, and he always wins all three. To quiet the children about their enforced complicity, he imprisons them. When they number 2,000 and the Pope anguishes publicly over their disappearance and the League of Nations investigates it, he isolates the children in the wilderness after a Nazi-like deportation in boxcars, and finally drowns them at sea, denying they ever existed. 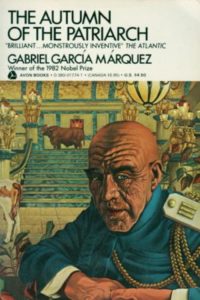 “The novel is unendingly bizarre and fevered, but ultimately not difficult. Yet it is difficult to enter: a densely rich and fluid pudding that begins at the end and makes Faulknerian leaps forward and backward in time. Sentences at times run on for three pages, with dialogue neither quoted nor paragraphed. García Márquez has compounded the problems by making the novel a puzzle of pronouns, consistently changing narrative points of view in mid-sentence.

The narration is largely within the General’s mind, but García Márquez also enters other minds with brief intensity, often speaks in the collective voice of all people in the blasted nation; and so, through relentless immersion of the reader in these exquisitely detailed perspectives, he illuminates the monster internally and externally and delivers him whole. 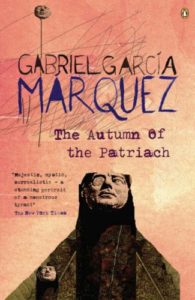 “The General deteriorates from a deformed, charismatic stud into a mindless blood beast imprisoned on the ‘throne of illusions’ that his power creates, unable to say what is true now, or what was true in the beginning. He comes to think of himself as God and names his son Emanuel.

A reader grows somewhat weary at times over the excesses, the repetition and predictability of certain sections—that old man walking endlessly through the palace corridors, kicking lepers and beggars in the courtyard, tending the resident cows on the stairs and taking the concubines by surprise, and there is a yearning for some pithy understatement. But García Márquez is as exorbitant as Melville and Dostoyevsky. He believes not only that excess is good for you, but that it is essential, that a book must have an immensity about it in the same way life is enormous—and dense and mysterious and as repetitiously predictable as the General’s vengeance for an affront. How else, his novel implicitly asks, could the story of interminable dictatorship be told?

This novel, of necessity then, has none of the life-celebrating quality that made One Hundred Years of Solitude so universally embraced. There is nothing to celebrate in the General’s long and tortured life. He is given endless opportunity to persuade us that his anguish and grief and bafflement are real. But we are never persuaded. He is not even pitiable. He is a spectacle, the embodiment of egocentric evil unleashed, maniacally violent, cosmically worthless and despite pretentions to eternity, as devoid of meaning as anything else in an absurd world. His main contribution to life, finally, is fear; but fear such as thunder, cancer or madness may provoke, fear based on irrational possibility, on the oblique ravages of a diabolical deity.

The book is a supreme polemic, a spiritual exposé, an attack against any society that encourages or even permits the growth of such a monstrosity. 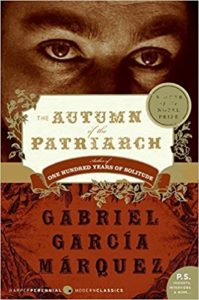 “But the monster is not reducible to a single cause, any more than civilization is explainable through the invention of the wheel. The cause is beyond reductive statements, even when they exfoliate into such resplendent prose. The General presumes to have love of a kind for his goddess mother and his lusty wife. But he loves them the way he loves and softly caresses his wounded testicle: as an extension of himself. Given time, he will annihilate anything that is not of, by, from, or for himself. Could lovelessness alone explain such blood-drenched misanthropy?

The incapacity to love seems to stand, rather, as another fact of the General’s life, like the whistle of his hernia, or the seed of his unknown father, or his discovery that a lie is more comfortable than doubt. And these facts, under the hand of this master novelist, accumulate not to explain anything simply, but to embody a most complex and terrible vision of Latin America’s ubiquitous, unkillable demon.”