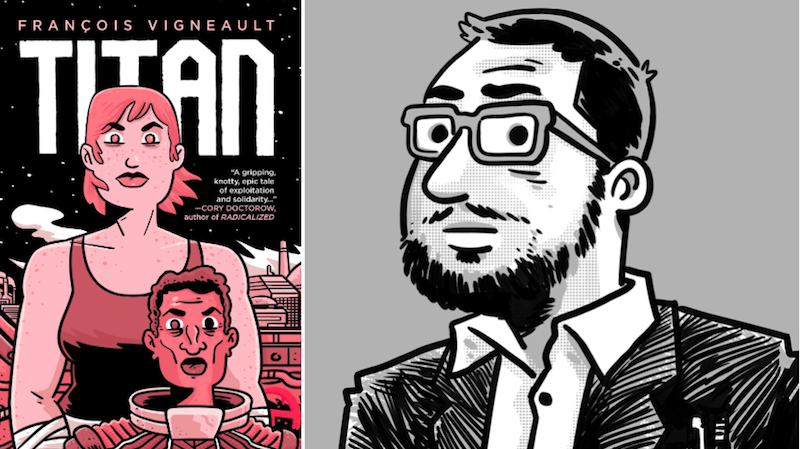 This week, we spoke to the cartoonist and author of TITAN, François Vigneault.

François Vigneault: One that oddly enough has stuck with me for years is Ten Kids, No Pets by Ann M. Montgomery of The Baby-Sitters’ Club fame. It’s the first book I can remember where the structure of the book really made an impression on me—each chapter is a sort of short story, focusing on a different character and taking place in a different month over the course of a year. It all struck me as very clever (one of my favorite books, Black Swan Green by David Mitchell has a similar structure).

FV: Four Ways to Forgiveness by Ursula K. LeGuin is a set of four interlocking novellas that recounts an interplanetary slave rebellion and its aftermath from multiple points of view. What I love about LeGuin’s work is the way she looks at the biggest possible stories from a defiantly human perspective; she insists on the importance of the individual even as they are caught up in the relentless and often cruel stream of history.

FV: The Once and Future King by T.H. White. I’m very surprised I never got turned on to it when I was younger, since I loved myths, legends, and fantasy. I suppose I thought it would be a straight-forward telling of the King Arthur myths, something dense and old-fashioned that I really ought to read but wasn’t very excited about diving into. I had seen the Disney film The Sword in the Stone and I liked it, but it didn’t really click with me that I needed to seek out the source material. It was only in reading Helen Macdonald’s memoir H is for Hawk a few years back that I got an inkling of what a strange, moving, and hilarious series of tales The Once and Future King really is. The writing is smooth, the humor layered, the central morality of the story is deeply touching.

FV: If David Mitchell had magically written the aforementioned Black Swan Green a couple decades earlier I think it would have really helped me process my own teenage years.

FV: I make it a rule to neither give nor receive gifts as much as possible. But I love lending books.

FV: The Brothers Karamazov really didn’t do anything for me.

FV: Earth Abides by George Stewart. To say “no one has heard of it” is of course a gross overstatement (and I am sure that it is getting some more attention in light of the Coronavirus pandemic), but I think it really isn’t as well known as it should be.

FV: Beauty by Kerascoët and Hubert. A terrific, transcendent riff on fairy tales, which at first seems to be a cutting parody or sendup of the genre, but finally in my opinion takes its place as a great tale for the ages. Boasts what I would consider to be career-best artwork by Kerascoët (the pen name of a married couple who work collaboratively, Marie Pommepuy and Sébastien Cosset) and hilarious, tragic, and insightful writing by Hubert, who sadly passed away far too young earlier this year.

FV: I’m one of these crazy people with a half-dozen or more books going at once, which is a great way to guarantee you don’t finish any of them in a timely manner. Some of the books currently on the docket include Caste: The Origins of Our Discontents by Isabel Wilkerson, Utopia Avenue by David Mitchell, The Trouble with Peace by Joe Abercrombie, Howl’s Moving Castle by Diana Wynne Jones, Red Mars by Kim Stanley Robinson, and Intimations by Zadie Smith.

FV: The Last Policeman trilogy by Ben H. Winters has all the makings of a fantastic TV show (and I think it inevitably will be one); my hope is that the producers are able to create something that matches the dark, intelligent, and philosophical source material.

François Vigneault is an American-born cartoonist living in Montréal, Québec.

His first graphic novel TITAN was published in French by Éditions Pow Pow (May 2017) and released in an updated and revised English edition by Oni Press on November 10, 2020. The book was called ‘a smart, stylish political sci-fi romance thriller’ by the Comics Journal, and the French edition has been nominated for multiple prizes, including the Prix Des Libraries Québec and the Joe Shuster Award for Best Cartoonist.

His latest release is 13e Avenue, a YA comic book series created with Geneviève Pettersen and published by Éditions de la Pastèque. The first volume won the inaugural Prix Des Libraries Québec award for best youth graphic novel, along with prizes at the Trois Rivieres and Saguenay-Lac-Saint-Sean Book Festivals, and has been nominated for many others, including the Prix des Collèges at the 2020 Angoulême Comics Festival.

François Vigneault’s TITAN is out now from One Press