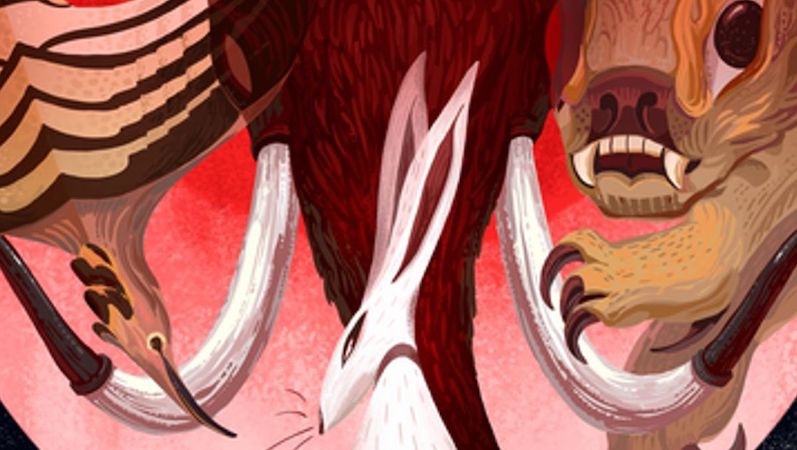 Five Sci-Fi and Fantasy Books to Ease Your April Isolation

IN THESE UNCERTAIN TI—just kidding, I would never do that to you. Yes, the world is in even more chaos and flux than usual right now. And yes, publishing has taken a hit, as bookstores (temporarily) close and literary events take to Zoom. Books that were on track to be published in Spring have been bumped back, and many author tours have been disrupted. In light of all that, I’m highlighting five books, three from March and two still set to hit shelves in April, that have had their publications jostled by world events. (And given that most of my May books are getting new birthdays, I’m going to have to improvise next month!) In the meantime, please stay home, stay healthy, read a lot, and order from indies so that they can hire all of their staffs back once we’re on the other side of this Stephen King nightmare. 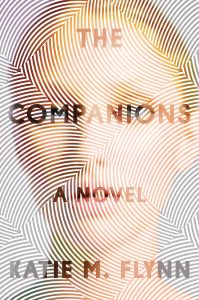 Having said all of that, we’re starting this list with a book about a quarantine. But it’s worth it, I promise! Thanks to a deadly virus, California has instituted a lockdown, declaring that everyone living has to hide away in sterile high-rises, no one comes in, no one goes out.

This rule does not apply to the dead.

Naturally, as soon as science cracks death and finds a way for people to upload their consciousnesses as their bodies fail, the wealthy jump to take advantage of it. But they don’t jump quite fast enough, because a group known as Metis Corporation finagles the intellectual property rights to the dead. So if your lucky, you’re uploaded into a rolling, can-shaped robot, and your loving family cares for you—but if you’re less lucky you’re sold into servitude to the highest bidder, and since the dead have no rights, there’s not much you can do to fight. At least, until a newly-deceased teen named Lilac realizes she can ignore orders, and sets out on a journey to bring her killer to justice. 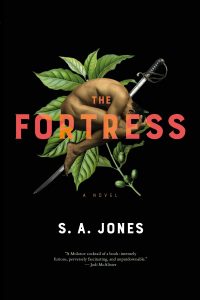 It’s always a wonderful day when we can welcome a new SFF publisher to the world. And March saw the debut of Erewhon Books, the brainchild of longtime Tor Books editor Liz Gorinsky. They’ve come out of the gate with a dark and unsettling work of feminist SF, The Fortress.

Jonathon Bridge has the perfect life: corner office doing a job he loves, a closet full of knife-sharp suits, a beautiful wife, a baby on the way, and a string of lithe young “interns” when the wife and the baby-on-the-way are too demanding and he wants a little pure fun.

His perfect life didn’t include the wife finding out, however.

When Adalia learns the truth and discovers the culture of entangled sex and violence at her husband’s firm, she gives him a choice: divorce, or a year in the self-contained city-state known as The Fortress. He agrees, and upon entry to The Fortress he submits himself to the rule of the Vaik, the Indigenous women who run it, replying “I consent” to each of the three vows that are his new law. For one year he may not ask any questions, he may not threaten violence of any kind, and if any of the women demands sex, he has no right to say no.

Thus the man with the perfect life finds himself an object to be used, much as his own interns used to be—but can simply reversing the status quo change a person’s heart? 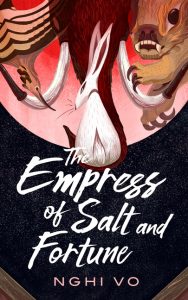 The Empress of Salt and Fortune by Nghi Vo
(Tor.com Publishing, March 24)

Once upon a time, an Emperor desired a Northern bride—not for love, obviously, but to shore up his trade with a new region. And so in short order the new empress In-yo was packed down South, to be stared at with mistrust as she tried to make a life in the Court until the requisite heir was gotten. Her duty complete, the Emperor banished her, and she vanished from history. Except, of course, that’s not how this goes at all. In-yo goes into exile with her loyal servant Rabbit, where she continues ruling, just in a secret, far more magical way.

We join the story after In-yo’s death, as Rabbit, ever-faithful, tells a story of queer women creating a life together under the weight of a patriarchal empire. Rabbit unspools the tale to Chih, a nonbinary archivist who’s getting way more history more than they bargained for, and Almost Brilliant, their hoopoe friend. The story doesn’t come out like an epic, set out under chapter headings, but rather flows and winds as Rabbit notices humble objects like lychee fruit, or a bag of salt, and finds her memory jogged. These “small” items, items that make up a life, become the scaffold for a story that is as epic as any Emperor’s. 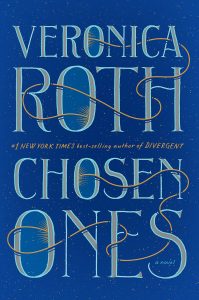 Fantasy literature is littered with prophecies. But what happens when the prophecies are fulfilled, and life has to go back to normal?

Veronica Roth, author of the enormously successful Divergent series, tackles this question in her adult debut Chosen Ones. Five kids—Sloane Andrews, Esther Park, Ines Mejia, Matthew Weekes, and Albert Summers—were ripped out of regular routines of dating, homework, and family dinners to battle an evil called the Dark One. They defeated him, they were celebrated, the world moved on. But a decade later the five Chosen Ones are still trying to find new purpose in life—or at least control their PTSD. Until, on the tenth anniversary of their triumph, one of the five dies. The remaining four come together, the only people in the world who truly understand the battle between good and evil, and they realize that the prophecy was wrong. The Dark One wasn’t defeated, and he isn’t finished with them yet. 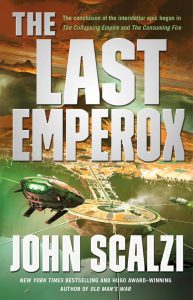 John Scalzi won a Hugo for Best Novel in 2013 for his satire Redshirts, wrote a bar-setting military SF series with his “Old Man’s War” novels, and explored the implications of an entirely virtual society in Lock In and Head On. His latest project is a far-ranging political space opera trilogy, the Interdependency Series, which comes to an end this month with The Last Emperox.

At its height, The Interdependency was a vast network of planets connected by an interstellar pathway known as The Flow, which allowed communication and culture to travel freely among societies. But now The Flow has collapsed, and whole communities are suddenly finding themselves isolated and adrift—as the scientists who predicted the collapse scramble to preserve any kind of connection they can, and the more venal-minded race to stockpile as many resources as possible before the inevitable economic freefall. Emperox Grayland II has fought hard to keep control of her empire and protect her people, but now she has only a handful of allies backing her against the legions that want to take her throne. She can rally herself, her loyal subjects, her dwindling resources—but will it be enough to save humanity from an unending Dark Age?