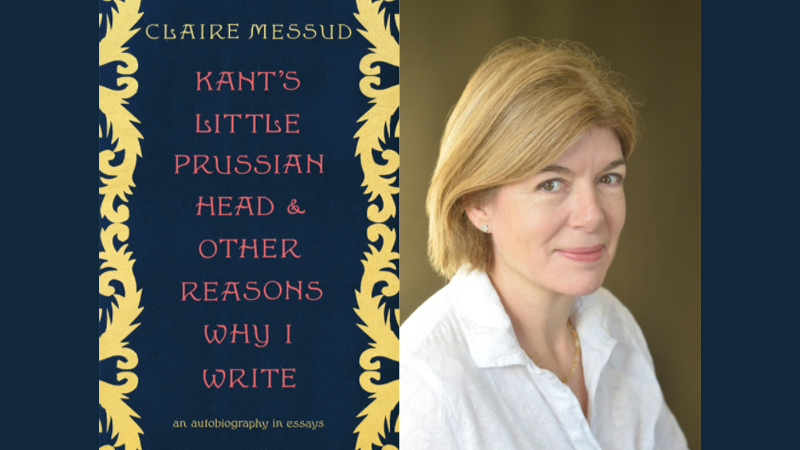 Five Books about the Writing Life

Claire Messud, the author of Kant’s Little Prussian Head & Other Reasons Why I Write, shares five books in her life

Claire Messud’s autobiography in essays Kant’s Little Prussian Head and Other Reasons Why I Write is published today. She shares five books about the writing life. 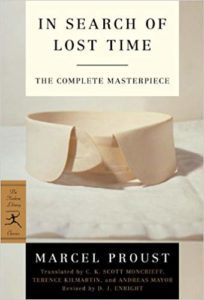 In Search of Lost Time by Marcel Proust

This classic is, of course, about many things––love, society, art, memory, time, relationships, you name it––but at its heart it’s a novel about becoming an artist, a writer––about the impulse to create, to account for experience in words, to move others by experience as Marcel himself has been moved. It’s one of those books you can never really be done with––it contains life in all its facets, along with meditations on the rendering of life, on the nature of art.

Jane Ciabattari: What are your favorite sections of this masterpiece?

Claire Messud: I have many favorite moments––and it’s been years since I read the book entire, so upon rereading I’d surely discover new ones. I always love the scenes with Madame Verdurin and her set––people don’t necessarily think of Proust as funny, but his satirical portraits of Paris society are rapier-sharp and hilarious. And of course the meditations––I think of the section about memory, involuntary and voluntary, in Sodom and Gomorrah, for example, when Marcel returns to Balbec. But even if we stick straightforwardly to the first volume, there’s more emotional and intellectual illumination in Swann’s Way than in most novels entire. Regarding the writing life, in ‘Combray’ there’s not only the famous madeleine scene, of course, about involuntary memory; but also the passage about Marcel trying to frame the vista of the Combray church as a writer, the first exploration of his aesthetic principles. I always particularly love the sections about Vinteuil, the composer, whose musical air so haunts and moves Marcel. And yet––this is brilliant––young Marcel has great trouble accepting that the dull old guy who lives down the road could be the creator of this powerful and intimate musical experience. 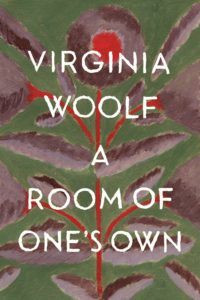 A Room of One’s Own by Virginia Woolf

This book, originally two lectures given by Woolf at the women’s colleges at Cambridge (Newnham and Girton) was powerfully important to me when I first read it in college. Woolf’s novels, too, are a vital part of my interior landscape. When I was young, I thought a good deal about how women’s narratives might be distinct––in form as much as in content––and about how the particular challenges of women’s lives might shape those narratives. The conversations are deepened and rendered more complex over time; but these questions abide.

JC: A Room of One’s Own has served for generations of women writers as an affirmation, an open door. How have your thoughts on women’s narratives, and how the challenges of their lives shape those narratives, changed over the years?

CM: My mother was a voracious reader, and because of her, I read growing up a canon of amazing and under-appreciated women writers––not just Woolf, Katherine Mansfield, Elizabeth Bowen and Muriel Spark, but also Jean Rhys, Sylvia Townsend Warner, Djuna Barnes, Barbara Pym, and Christina Stead, among others. Many of these women struggled in poverty––Christina Stead, at the end of her life, lived alone in a bedsit in North London eating baked beans out of a tin. Almost none of them had kids. I understood from early on that for women in particular, to be a writer entailed painful sacrifice and probably unhappiness––a strange embarcation point for a passionate vocation, when you think about it.

All that Woolf says in her essay remains to an extent true; but of course women have much greater freedom in all realms than a hundred years ago, and our narratives have also evolved dramatically. We’re surrounded by an exhilarating array of amazing and diverse women writers––so many I can’t begin to list them––with an equally diverse array of personal circumstances. For each of us, those circumstances and experiences shape our narratives, inevitably. At this point, even if the refrain is sometimes familiar, the abundance of voices in the chorus has, wonderfully, altered the music.

Create Dangerously: The Immigrant Artist at Work by Edwidge Danticat

Inspired by Albert Camus’ powerful text of the same name, Danticat’s brilliant and beautiful book explores the responsibilities of immigrant artists to bear witness. It’s an exploration of her own artistic origin stories, and of the inevitable interweaving of art and politics.

JC: Danticat makes such a strong statement with this book: “Create dangerously, for people who read dangerously.” She describes how the 1964 execution of guerrilla warriors/writers Marcel Numa and Louis Drouin during Papa Doc Duvalier’s regime, and the 2000 assassination of radio journalist Jean Dominique, who had survived several arrests and exiles, at his radio station in Haiti, were formative in her own work, and shaped the role she plays: “The immigrant artist shares with all other artists the desire to interpret and possibly remake his or her own world. So though we may not be creating as dangerously as our forebears—though we are not risking torture, beatings, execution, though exile does not threaten us into perpetual silence—still, while we are at work bodies are littering the streets somewhere….” What lessons are there to learn from her continuing awareness of the ever-shifting political backdrop in her homeland?

CM: Danticat’s remarkable essay collection both enacts and exhorts a commitment to witness, to illuminating the experiences of those who’ve given their lives for truth. Filled with sobering and difficult material, the book is also written with hope, with faith in storytelling, in language, and in the possibility of change. As the United States confronts a particularly dark stretch in our history, Danticat’s example––a combination of perseverance, courage and faith––is invaluable. In a beautiful postscript to the collection, “A Year and a Day,” Danticat explains that in Haitian Vodou tradition, “it is believed by some that the souls of the newly dead slip into rivers and streams and remain there, under the water, for a year and a day. Then, lured by ritual prayer and song, the souls emerge from the water and the spirits are reborn.” This, for her, is a source of hope. There’s magic in words, in prayer and song and stories; there is rebirth, too. As Edgar says, in King Lear, “The worst is not/ So long as we can say ‘this is the worst.’” 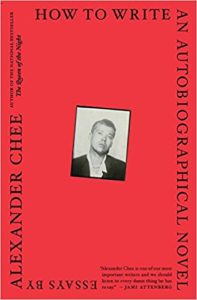 How to Write An Autobiographical Novel by Alexander Chee

Chee’s collection of essays record his evolution as a writer––and a person––with great perspicacity, humor and frankness. Ambition, frustration, life’s inevitable distractions and delusions; but throughout, a commitment to art and to truth. And such beautiful sentences!

JC: “…if anyone had made a choice, the novel had, in choosing me like I was a door and walking through me into the world,” Chee writes of Edinburgh, his first novel. In retrospect, how do you think about your own first, When the World Was Steady, published in 1995?

CM: I began what became my first novel as an undergraduate, writing stories about two middle-aged sisters. Initially, they were American, traveling in the Caribbean; over time they became British, traveling in Indonesia and Scotland. It doubtless seemed quixotic that in my early twenties I wrote about older women, thwarted in different ways in their lives and struggling to be free. One sister, who lives in Sydney, takes a trip to Bali in the wake of her divorce; the other, in London, devoutly religious and unmarried, takes their mother on a trip to the Isle of Skye.

The confluence of circumstances and experiences––both lived and literary––that led to that novel would take too long for me to unpack here; but for me this book wasn’t just logical, it was inevitable. It made for an eccentric first novel, and simply an eccentric novel altogether, perhaps; certainly it has had only few readers over the years. But what Alexander Chee describes is true for me also: these characters came through me.

I’ve more than once had the experience of having recurring dreams about a familiar place I can’t, upon waking, locate; and then realizing that I’m dreaming about the fictional locales of my characters. Nowadays we talk a lot about craft, as though everything can be taught; but mystery is a large part of creativity. When, for a writer, it’s most exciting, writing fiction can be a bit like being the priestess Pythia––you’re just a vessel or, as Chee says, a door.

Not A Novel: A Memoir in Pieces by Jenny Erpenbeck

Erpenbeck is one of the most exhilarating and profound writers at work today; and her new book of non-fiction is as brilliant as are her novels. I can’t recommend her work highly enough.

JC: “My writing began with reflections on borders, reflections on how we change over the course of our lives, voluntarily or involuntarily, reflections on what identity is, and how much we can lose without losing ourselves,” she writes. Would you say her work is especially acute for writers today, experiencing so many critical transitions from the past to the uncertain future—not unlike the shift in her universe in East Berlin after the fall of the Berlin Wall?

CM: Jenny Erpenbeck’s life experience of course informs her fiction, and as you say, as someone raised in the former DDR, she’s lived through, and reflects upon, considerable uncertainty and transition. But it’s also true that her singular genius is the ability not only to observe with great clarity, but to synthesize and transpose experience ––to write about everything from Ovid to the refugee crisis with specificity, lucidity and wisdom.

That’s something I marvel at repeatedly––a writer is just a person like everyone else, but one in whom the confluence of experience, circumstance and temperament allows for the creation of something extraordinary. Like a flower seeded by the wind, a writer can arise in unexpected places, and sometimes that serendipitous creative flourishing gives people––a few, or many, or an entire generation––a voice that we didn’t know we needed. Sometimes a rare flower blooms unnoticed; but wonderfully, in the case of Jenny Erpenbeck, her voice reaches many European readers, and hopefully an ever greater number of North American readers also.