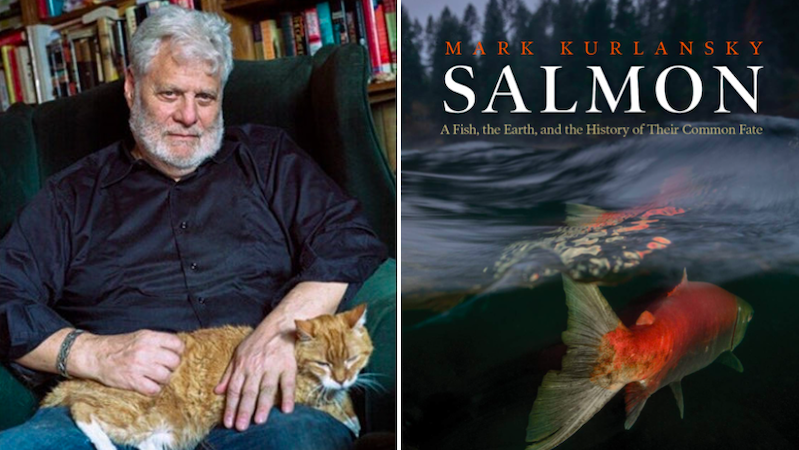 Mark Kurlansky, the author of Salmon: A Fish, the Earth, and the History of Their Common Fate shares five books in his life.

Mark Kurlansky’s Salmon: A Fish, the Earth, and the History of Their Common Fate is published today. He shares five books about magnificent fish. 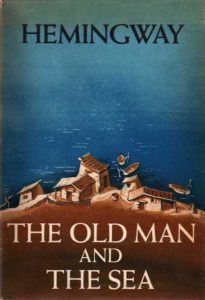 The Old Man and the Sea by Ernest Hemingway

One of the few books with a realistic view of commercial fishing and its heartbreak. I know people in the Caribbean who still fish this way.

Jane Ciabattari: The Old Man and the Sea was the last great novel of Hemingway’s career, filled with vivid near photographic images like this: “Just before it was dark, as they passed a great island of Sargasso weed that heaved and swung in the light sea as though the ocean were making love with something under a yellow blanket, his small line was taken by a dolphin. He saw it first when it jumped in the air, true gold in the last of the sun and bending and flapping wildly in the air.” The challenge of the massive marlin is too much for this “old man,” who fished in a skiff with a harpoon and had gone eighty-some days without a catch. So Hemingway was accurate in his portrayal; how often does a fishing boat come up empty?

Mark Kurlansky: The fishing that Hemingway described was and still is typical of the Caribbean although the Cuban government no longer allows it on the northern coast of Cuba. I have spent time with a very similar fishery in San Pedro de Macorís, Dominicn Republic. It is not unusual to get nothing and these men return everyday with sad and frustrating tales but also frequently very large fish. Fishing is always a gamble. 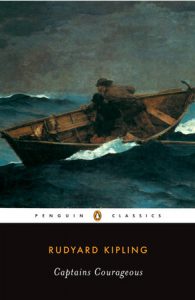 Despite little experience in this—he moved to Gloucester and went out once and quickly returned seasick—this book usually presented as a coming of age YA book gives the best description of the incredible high speed Gloucester to Grand Banks cod fishery.

JC: In his autobiography Kipling describes learning the details of fishing from a Vermonter who had “served in the Gloucester fleet when he was young.” They visit the shoreline and Boston Harbor together. “Old tales, too, he dug up,” Kipling writes, “and the lists of dead and gone schooners whom he had loved, and I reveled in profligate abundance of detail—not necessarily for publication but for the joy of it.” Kipling transforms this research into passages like this in Captains Courageous: “The sun was just clear of a horizon they had not seen for nearly a week, and his low red light struck into the riding-sails of three fleets of anchored schooners—one to the north, one to the westward, and one to the south. There must have been nearly a hundred of them, of every possible make and build, with, far away, a square-rigged Frenchman, all bowing and curtseying one to the other. From every boat dories were dropping away like bees from a crowded hive; and the clamor of voices, the rattling of ropes and blocks, and the splash of the oars carried for miles across the heaving water.” Is this the cod fishing industry at its height?

MK: Kipling is describing the golden age of the New England cod fishery. The ships are the most beautiful commercial fishing boats ever designed and were quickly adopted to be racing yachts. They were incredibly fast because there was little in the water and a lot of oil aloft, this also meant they blew over easily. I wish I could have seen the days when Gloucester harbor was filled with canvas and experienced a run to the Grand Banks and back. Commercial fishing at its most thrilling. Kipling moved to Gloucester, rented a house by the harbor and wanted to experience all this but the open Atlantic these schooners fly over proved far too rough for his stomach and he couldn’t do it. So he interviewed. 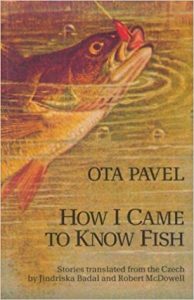 How I Came To Know Fish by Ota Pavel

How I Came To Know Fish is the memoir of a Czech Jew who was raised by a fishing obsessed father and during Nazi occupation survived by learning absolutely everything about the fish he needed to catch.

JC: Pavel describes his father teaching him how to fish for carp, and how crucial his skill became during the occupation. “At that time we needed delicious fat carp meat. We had so little to eat and nothing much to barter. We could trade carp for flour, bread and Mama’s cigarettes. Mama and I lived alone at that time, for the rest of the family was in a concentration camp. It was up to me to catch the carp, but it took me some time getting to know them. I had to learn to tell the difference between their good and bad moods; I had to learn how to tell when they were hungry, when they were full, and when they felt like playing. I had to recognize where they were likely to swim, and where I would look for them in vain.” Fishing, Pavel also writes, is “the alternative, the natural world where the jerky streetcar of civilization did not threaten to jump its tracks. . . . Fishing is freedom most of all.” Was fishing also necessary to his psychological survival?

MK: Fishing was the identity of his father, his family and his life. During the war it became also his survival but it was always who he was. 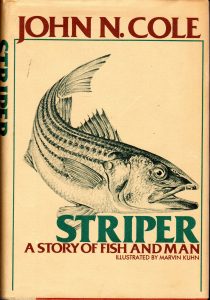 Striper: A Story of Fish and Man by John N. Cole

A charming book about the camaraderie of commercial fishing and absolutely everything about the life cycle of striped bass.

JC: Cole spent seven years in the 1970s trying to make a living fishing for striped bass off the eastern end of Long Island, first with a fellow twentysomething, and more successfully as crew for a local fishing family, the Poseys. How would you say the situations changed for bass during the time his memoir covers?

MK: Striper, like salmon and shad, is an anadromous fish and depends on the health of both the sea and the rivers. So its situation is always changing. River pollution was a huge problem but then was cleaned up only to have other problems arise. Today it is climate change. 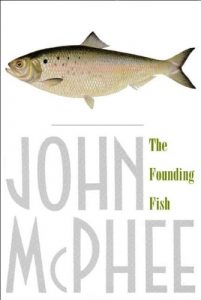 The Founding Fish by John McPhee

McPhee’s book about shad one of the more fascinating fish and its role in American history. A major fish that became rare from pollution and destruction of rivers.

JC: McPhee covers the history of shad, and even inserts it into Washington’s camp, Lincoln’s assassination. How much to you think McPhee’s own shad-fishing stories add to this account?

MK: It is very difficult to understand a species without fishing for it because that is how we relate to them. For both my cod and now my salmon book I went to sea with commercial fishermen. I think that while McPhee’s book is essentially history, he would not have understood the story he was telling if he had not fished for them.