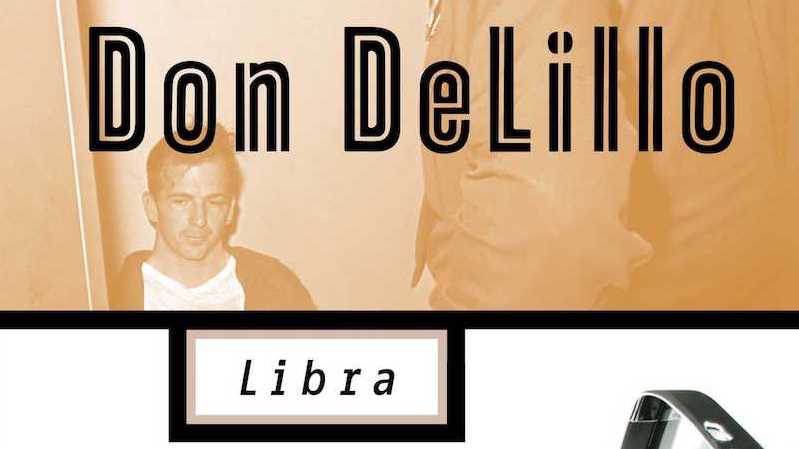 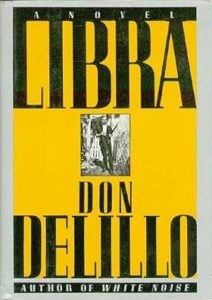 “Don DeLillo has produced nine novels in the past 17 years, and by now his admirers have learned to expect almost anything. His central character may be a rock music star or a child math genius; his setting may be a remote Aegean island or a college football field. Certain preoccupations, however, tend to reassert themselves: the assassination of President Kennedy, the labyrinthine underworld of spies and terrorists and (most notably in White Noise, which won the American Book Award in 1985) the pervasive effect of the modern American news media.

These three subjects come together in Libra, his latest and richest novel. It is also his most complicated, with a dual slate of characters and a plot line that might be described as herringbone-shaped. Apparently unrelated events slant forward from distant sources to be channeled into a single moment in history: six seconds in Dallas on Nov. 22, 1963.

What if, Mr. DeLillo asks, the assassination was a C.I.A. conspiracy? What if agency operatives, disgusted by the Bay of Pigs debacle and alarmed at signs of growing rapprochement between Kennedy and Castro, schemed to stage an unsuccessful attempt on Kennedy’s life that would implicate Castro supporters? And what if they seized upon Lee Harvey Oswald—a onetime defector to Russia, sole member of his own unauthorized branch of the Fair Play for Cuba Committee—as the man to shoulder the blame? And finally, what if they decided in the end that a successful attempt would be even more effective than an unsuccessful attempt? 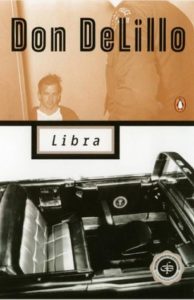 “Other people have asked these questions before, of course, but never so provocatively. For one thing, that herringbone plot line serves to make the most humdrum occurrence seem suddenly meaningful, laden with dark purpose. The book begins with Lee Oswald as a boy in the Bronx—a misfit, a chronic truant, sharing oppressively close quarters with his mother. Then there’s a brief intermission: a glimpse into the book-filled, document-choked study of Nicholas Branch, who is writing a secret history of the assassination of President Kennedy. This is followed by our introduction to Win Everett, a C.I.A. man now semiretired, so-called, on account of his overzealousness in the matter of Cuba. It is April 1963, and Everett has just begun to frame his plan for an ‘electrifying event’ that will bring the anti-Castro movement back to life.

Oswald will reappear as a high school dropout in New Orleans, as a marine at a U-2 base in Japan, as a factory worker in Russia and finally as an order filler at the Texas School Book Depository in Dallas. Win Everett will reappear surrounded by more and more associates—first the two former colleagues he trusts most and then other men less predictable, less controllable, as his plan takes on a life of its own. Nicholas Branch will reappear only rarely, sinking ever deeper in a morass of eyewitness accounts, hair samples, chemical analyses, then the accounts of the dreams of eyewitnesses and then 25 years of novels and plays and radio debates about the assassination. He’s not really part of the story, but he plays an important role nevertheless. He reminds us of the broader view; he casts the light of history over the other characters’ most commonplace moments.

It’s in those commonplace moments that Mr. DeLillo reveals his genius. After all, he must have had the same source materials available to anyone else—the Warren Commission report, the usual newspaper articles and court proceedings. But he takes the stale facts and weaves them into something altogether new, largely by means of inventing, with what seems uncanny perception, the interior voice that each character might use to describe his own activities. 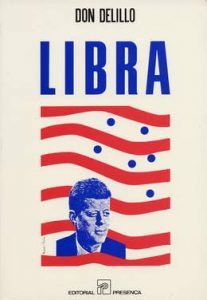 “At what point exactly does fact drift over into fiction? The book is so seamlessly written that perhaps not even those people who own both upstairs and downstairs copies of the Warren report could say for certain. Oswald’s mother, for instance, with her nonstop, plaintive, sometimes unwittingly comic stream of talk, was probably willing to speak to any newsman who poked a microphone in her face; and therefore Mr. DeLillo had merely to transcribe her long-ago monologues. Or did he? Other voices are equally convincing, and yet obviously not all of those could have been taped … But Libra is not merely lifelike; it is also, in the best sense, novellike. It tells a story, and it tells it skillfully, with much attention to character.

“And how about the most important character of all? Lee Harvey Oswald has always seemed both much, much too familiar (his rabbity, weak-jawed face staring out of the grimmer sections of every city in America) and endlessly mysterious. To Mr. DeLillo’s credit, that ambiguity is kept alive in Libra. It may even be heightened, because the portrait is so intimate—Oswald washing dishes, Oswald playing with his baby, Oswald cuffing his wife—and yet still he manages from time to time to surprise us. 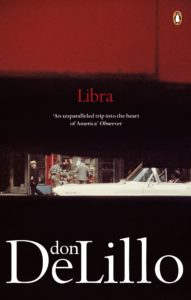 “Whether or not the C.I.A. conspiracy actually happened—and we end up persuaded that it could have—the book’s most compelling point is Oswald’s curiously external view of himself. He seems to have lacked an inner core, an absolute and unalterable sense of his own character. It’s easy to imagine such a man committing murder almost at random. Maybe the assassination was not so much a scheme as a long, helpless, headlong plunge downward.

In ‘American Blood,’ an article published by Rolling Stone magazine in 1983, Mr. DeLillo suggested that the John Kennedy assassination was ‘a story about our uncertain grip on the world—a story exploded into life by a homeless man who himself could not grip things tightly and hold them fast, whose soul-scarred loneliness and rage led him to invent an American moment that echoes down the decades.’ That Mr. DeLillo has been able to make his readers see the story the same way—that finally we’re interested less in the physical events of the assassination than in the pitiable and stumbling spirit underlying them—proves Libra to be a triumph.”