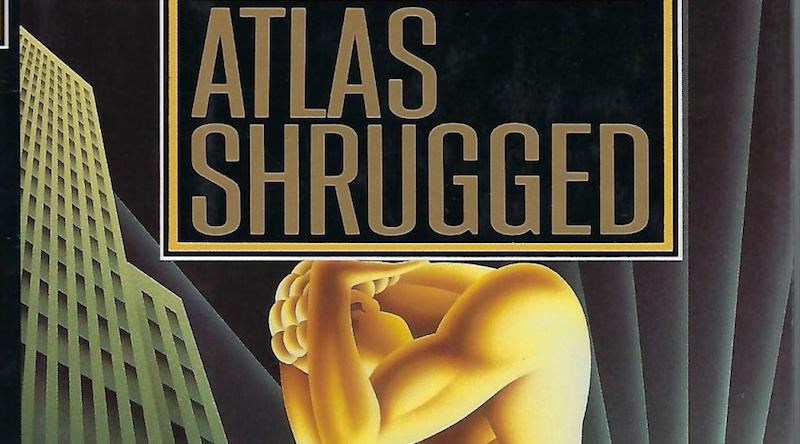 Strong Opinions from The National Review 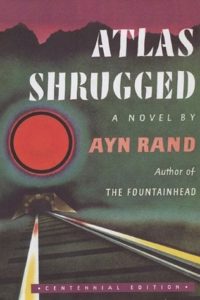 Run for your life from any man who tells you that money is evil.

That sentence is the leper’s bell of an approaching looter.

“The news about this book seems to me to be that any ordinarily sensible head could not possibly take it seriously, and that, apparently, a good many do. Somebody has called it: ‘Excruciatingly awful.’ I find it a remarkably silly book. It is certainly a bumptious one. Its story is preposterous. It reports the final stages of a final conflict (locale: chiefly the United States, some indefinite years hence) between the harried ranks of free enterprise and the ‘looters.’ These are proponents of proscriptive taxes, government ownership, labor, etc., etc. The mischief here is that the author, dodging into fiction, nevertheless counts on your reading it as political reality. ‘This,’ she is saying in effect, ‘is how things really are. These are the real issues, the real sides. Only your blindness keeps you from seeing it, which, happily, I have come to rescue you from.’

Since a great many of us dislike much that Miss Rand dislikes, quite as heartily as she does, many incline to take her at her word. It is the more persuasive, in some quarters, because the author deals wholly in the blackest blacks and the whitest whites. In this fiction everything, everybody, is either all good or all bad, without any of those intermediate shades which, in life, complicate reality and perplex the eye that seeks to probe it truly. This kind of simplifying pattern, of course, gives charm to most primitive storyknown as: The War between the Children of Light and the Children of Darkness. In modern dress, it is a class war. Both sides to it are caricatures. 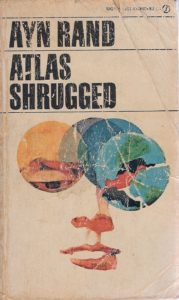 “…the strenuously sterile world of Atlas Shrugged is scarcely a place for children. You speculate that, in life, children probably irk the author and may make her uneasy. How could it be otherwise when she admiringly names a banker character (by what seems to me a humorless master-stroke): Midas Mulligan? You may fool some adults; you can’t fool little boys and girls with such stuff–not for long. They may not know just what is out of line, but they stir uneasily. The Children of Darkness are caricatures, too; and they are really oozy. But at least they are caricatures of something identifiable. Their archetypes are Left-Liberals, New Dealers, Welfare Statists, One Worlders, or, at any rate, such ogreish semblances of these as may stalk the nightmares of those who think little about people as people, but tend to think a great deal in labels and effigies.

In Atlas Shrugged, all this debased inhuman riffraff is lumped as ‘looters.’ This is a fairly inspired epithet. It enables the author to skewer on one invective word everything and everybody that she fears and hates. This spares her the playguy business of performing one service that her fiction might have performed, namely: that of examining in human depth how so feeble a lot came to exist at all, let alone be powerful enough to be worth hating and fearing. Instead, she bundles them into one undifferentiated damnation. 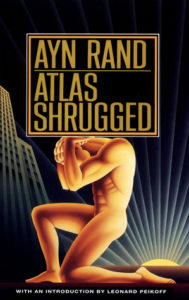 “So the Children of Light win handily by declaring a general strike of brains, of which they have a monopoly, letting the world go, literally, to smash. In the end, they troop out of their Rocky Mountain hideaway to repossess the ruins. It is then, in the book’s last line, that a character traces in the dir, over the desolate earth, the Sign of the Dollar, in lieu of the Sign of the Cross, and in token that a suitably prostrate mankind is at last ready, for its sins, to be redeemed from the related evils of religion and social reform (the ‘mysticism of mind’ and the ‘mysticism of muscle’). That Dollar Sign is not merely provocative, though we sense a sophomoric intent to raise the pious hair on susceptible heads. More importantly, it is meant to seal the fact that mankind is ready to submit abjectly to an elite of technocrats, and their accessories, in a New Order, enlightened and instructed by Miss Rand’s ideas that the good life is one which ‘has resolved personal worth into exchange value,’ ‘has left no other nexus between man and man than naked selfinterest, than callous “cash-payment.”‘ The author is explicit, in fact deafening, about these prerequisites. Lest you should be in any doubt after 1,168 pages, she assures you with a final stamp of the foot in a postscript: ‘And I mean it.’

“Atlas Shrugged can be called a novel only by devaluing the term. It is a massive tract for the times. Its story merely serves Miss Rand to get the customers inside the tent, and as a soapbox for delivering her Message. The Message is the thing. It is, in sum, a forthright philosophic materialism.

“Randian Man, at least in his ruling caste, has to be held ‘heroic’ in order not to be beastly. And this, of course, suits the author’s economics and the politics that must arise from them. For politics, of course, arise, though the author of Atlas Shrugged stares stonily past them, as if this book were not what, in fact, it is, essentially–a political book. And here begins mischief. Systems of philosophic materialism, so long as they merely circle outside this world’s atmosphere, matter little to most of us. The trouble is that they keep coming down to earth. It is when a system of materialist ideas presumes to give positive answers to real problems of our real life that mischief starts. In an age like ours, in which a highly complex technological society is everywhere in a high state of instability, such answers, however philosophic, translate quickly into political realities. And in the degree to which problems of complexity and instability are most bewildering to masses of men, a temptation sets in to let some species of Big Brother solve and supervise them. 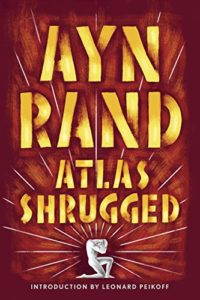 “Out of a lifetime of reading, I can recall no other book in which a tone of overriding arrogance was so implacably sustained. Its shrillness is without reprieve. Its dogmatism is without appeal. In addition, the mind which finds this tone natural to it shares other characteristics of its type. 1) It consistently mistakes raw force for strength, and the rawer the force, the more reverent the posture of the mind before it. 2) It supposes itself to be the bringer of a final revelation. Therefore, resistance to the Message cannot be tolerated because disagreement can never be merely honest, prudent, or just humanly fallible. Dissent from revelation so final (because, the author would say, so reasonable) can only be willfully wicked. There are ways of dealing with such wickedness, and, in fact, right reason itself enjoins them. From almost any page of Atlas Shrugged, a voice can be heard, from painful necessity, commanding: ‘To a gas chamber–go!’

“…we cannot help feeling at least a sympathetic pain before the sheer labor, discipline, and patient craftsmanship that went to making this mountain of words. But the words keep shouting us down. In the end that tone dominates. But it should be its own antidote, warning us that anything it shouts is best taken with the usual reservations with which we might sip a patent medicine. Some may like the flavor. In any case, the brew is probably without lasting ill effects. But it is not a cure for anything. Nor would we, ordinarily, place much confidence in the diagnosis of a doctor who supposes that the Hippocratic Oath is a kind of curse.”