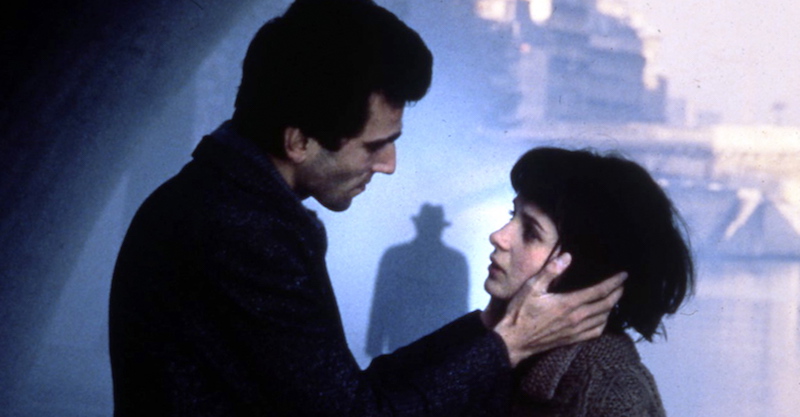 E.L. Doctorow on Milan Kundera's The Unbearable Lightness of Being 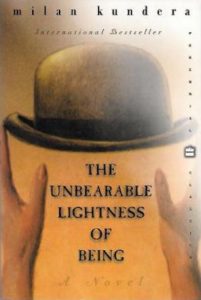 Love is the longing for the half of ourselves we have lost.

“‘I am bored by narrative,’ Virginia Woolf wrote in her diary in 1929, thus suggesting how the novel has been kept alive in our century by novelists’ assaults on its conventions. Writers have chosen to write novels without plots or characters or the illusion of time passing. They have disdained to represent real life, as the painters did a half century before them. They have compacted their given languages, or invented their own, or revised the idea of composition entirely by assembling their books as collages.

Appearing noticeably in the United States 15 or 20 years ago was the disclaimed fiction in which the author deliberately broke the mimetic spell of his text and insisted that the reader should not take his story to heart or believe in the existence of his characters. Disclaiming had the theoretical advantage of breaking through to some approximation of the chaos and loss of structure in life. The subject of these fictions became the impossibility of maintaining them, and the author by his candor became the only character the reader could believe in. John Barth is one writer who comes to mind as having explored the possibilities of this strategy, and the distinguished Czech novelist Milan Kundera in his new book, The Unbearable Lightness of Being, continues to find it useful.

“The question may reasonably be asked if this convention too isn’t ready for assault. May it not be too late to return to Tomas? Do we have to be told where he comes from any more than we have to be told where babies come from? There is a particular hazard to the author who intrudes on his text: He had better be as interesting as the characters he competes with and the story he subverts or we may find him self-indulgent or, worse, coy, like those animated cartoons where a hand draws a little animal and colors it in and pushes it along to its adventure down the road.

Even now, in our age, there is a sanctity to the story. Because it is supremely valuable to us – as valuable as science or religion – we feel all violence done to it must finally be in its service. Virginia Woolf’s experiment in avoiding narrative, Mrs. Dalloway, discovered another way to construct it or, perhaps, another place in which it could occur. The idea has always been to make it beat with life’s beating heart. 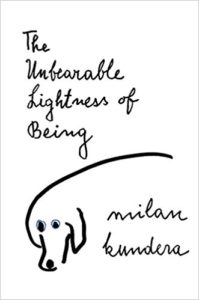 “Let us return to Tomas. Mr. Kundera has made him a successful surgeon. In Prague, in the spring of 1968, when Alexander Dubcek is trying to make the Czech Communist Government more human, Tomas writes a letter to a newspaper to add his voice to a public debate. Thereafter, the Russians invade Prague, Dubcek is replaced, public debate ceases, and Tomas is asked by the authorities to sign a statement retracting the sentiments of his letter. But he knows that once he does, if he ever again speaks out the Government will publish his retraction and his name among his fellow Czechs will be ruined. So he refuses and for his intransigence is then asked to sign a letter avowing his love for the Soviet Union, a possibility so unthinkable that he quits medicine and becomes a window washer. He hopes that now that he is down at the bottom he will no longer matter to the authorities and they will let him alone. What he discovers is that he no longer matters to anyone. When he was supposed by his hospital colleagues to be thinking of signing the retraction in order to keep his job they turned up their noses at him. Now that he’s been declassed for maintaining his integrity, he’s become an untouchable.

The first thing to note about this character’s fate is that it is a gloss on Orwell: To destroy Tomas, Mr. Kundera is saying, the powerfully inertial police apparatus doesn’t have to expend the energy required to torture him. It need only send around an affable plainclothesman with a letter to be signed. Once the policeman appears, no matter how Tomas responds his life is ruined.

The second thing to note is the idea of the exhaustion of meaningful choice. Tomas is one of four main characters born frankly of images in Mr. Kundera’s mind. All of them to one extent or another enact the paradox of choices that are not choices, of courses of action that are indistinguishable in consequence from their opposite. He shows us Sabina, a painter, as she is deciding whether or not to keep her current lover, Franz, a university professor. Franz is physically strong. If he used his strength on her and ordered her about, Sabina knows she wouldn’t put up with him for five minutes. But he is gentle, and because she believes physical love must be violent she finds Franz dull. Either way, whatever Franz does, she will have to leave him. 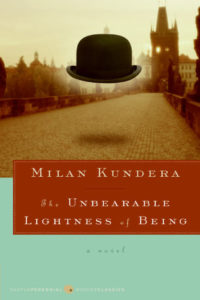 “Whether personal or political, all attitudes, stands, positions in the Kunderian vision come up short. He will kill off three of his quartet and allow the fourth to disappear from the book, presumably from a lightness of being; but his true story, the one to which he gives honest service, is the operation of his own mind as it formulates and finds images for the disastrous history of his country in his lifetime. The paradox of the essential identity of opposites describes an intractable world in which human beings are deprived of a proper context for their humanity. The author who ostentatiously intrudes in his characters’ lives and tells them how to behave mimics, of course, the government that interferes deeply in its citizens’ lives and tells them how to behave. Tomas and Sabina and Franz and Tereza were invented to live under two tyrannies, the tyranny of contemporary Czechoslovakia and the tyranny of Mr. Kundera’s despair.

Readers of the author’s celebrated novel The Book of Laughter and Forgetting will recognize here his structural use of leitmotif, the repertoire of phrases and fancies among which he circulates and recirculates. They will find the same ironic tone and brilliance of annotation of the fearful emptiness of Eastern European life under Communist management. Here too is the author’s familiarity with music, his preoccupation with Don Juanism, his almost voyeuristic attention to the female body and its clothes. And the pointed, surreal image: Park benches from the city of Prague, colored red, yellow and blue, floating inexplicably on the Vltava River. Like Gabriel Garcia Marquez, Mr. Kundera knows how to get ahead of his story and circle back to it and run it through again with a different emphasis. But the prose is sparer here, and the Garcia Marquez levitations are not events now, but ideas. There is less clutter in the prose, less of the stuff of life, as if the author had decided to send the myriad furnishings of novels, its particulars, down the Vltava, after the benches. This is a kind of conceptualist fiction, a generic-brand, no-frills fiction, at least in Michael Henry Heim’s translation. Mr. Kundera is not inclined to dwell on the feel of human experience except as it prepares us for his thought. 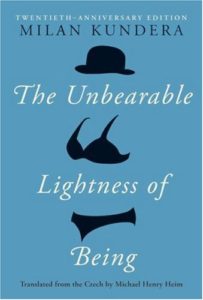 “One recurrent theme in the book is that the ideal of social perfection is what inevitably causes the troubles of mankind, that the desire for utopia is the basis of the world’s ills, there being no revolution and therefore no totalitarianism without it. This idea has currency among expatriate Eastern European intellectuals, and perhaps their bitter experience entitles them to it. But the history of revolutions begins, more likely, in the desire to eat or to breathe than in the thought that man must be perfected. And a revolutionary document like the American Constitution is filled with instructions and standards for civilized life under equitable law; and it is truly utopian, but its ideals are our saving grace and drive us to our best selves, not our worst.

It is not exactly self-indulgence or coyness that threatens The Unbearable Lightness of Being. The mind Mr. Kundera puts on display is truly formidable, and the subject of its concern is substantively alarming. But, given this subject, why are we forced to wonder, as we read, where his crisis of faith locates itself, in the world or in his art? The depiction of a universe in which all human choice wallows in irresolution, in which, as Yeats wrote, ‘The best lack all conviction, while the worst / Are full of passionate intensity,’ sometimes sets off the technique of this novel as an act of ego in excess of the sincere demands of despair. Mr. Kundera’s master, the prophet Kafka, we can’t help remembering, wrote a conceptualist no-frills fiction in which, however, he never appeared.

All this said, the work of reconceiving and redesigning the novel continues through the individual struggles of novelists all over the world, like an instinct of our breed. What is fine and valiant in Mr. Kundera is the enormous struggle not to be characterized as a writer by his exile and by his nation’s disenfranchisement, even though they are the conditions his nose is rubbed in by Czechoslovak history. He works with cunning and wit and elegiac sadness to express ”the trap the world has become,” and this means he wants to reconceive not only narrative but the language and history of politicized life if he is to accord his experience the dimensions of its tragedy. This is in direct contrast to the problem of the American writer who must remember not to write of life as if it had no political content whatsoever. We can hope, with Milan Kundera, not to enact one of his elegant paradoxes in our separate choices and discover that either one leads to the same exhausted end.”