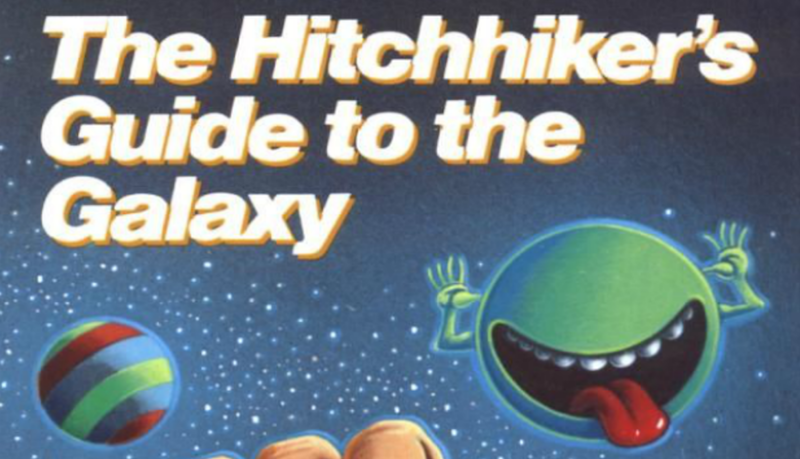 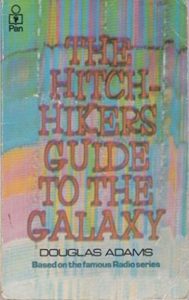 “This is the book that answers ‘The Great Question, The Ultimate Question of Life, the Universe, and Everything.’ The answer, as it happens, is ‘forty-two.’ Since the largest computer ever built (known as Deep Thought) takes seven-and-a-half million years to come up with the answer, the disappointment of the original questioners is perhaps understandable. They are even more disappointed when they learn that the only way to understand the answer is to phrase the question a little more specifically. For this, an even bigger computer and another ten million years are required. It turns out that this computer… 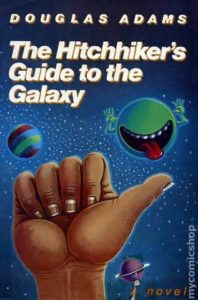 “But that is telling the story in chronological order, a narrative trick that Douglas Adams (who once wrote discontinuity for Monty Python’s Flying Circus) is never guilty of. He prefers to tell his stories backward, sideway and even inside out if that will help anyone, which it probably won’t. Suffice it to say that the hero of this novel is a perfectly ordinary Englishman named Arthur Dent whose house is about to be knocked down to make room for a bypass. Dent has a friend named Ford Prefect who looks like a perfectly ordinary Englishman but who actually comes ‘from a small planet somewhere in the vicinity of Betelgeuse and not from Guilford as he usually claimed.’ He is, in fact, a ‘roving researcher’ for the Hitchhiker’s Guide to the Galaxy, which is just what it sounds like – a compendium of useful information that outsells even the Encyclopedia Galactica. (Where else can you discover six important reasons for carrying a towel when traveling between the stars?) 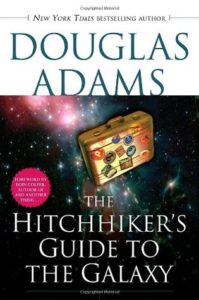 “Humorous science fiction novels have notoriously limited audiences; they tend to be full of ‘in’ jokes understandable only to those who read everything from Jules Verne to Harlan Ellison. The Hitchhiker’s Guide is a delightful exception, being written for anyone who can understand the thrill that might come to a crew of interstellar explorers who discover a mysterious planet, dead for five million years, and then hear on their ‘sub etha’ radio a ghostly voice, hollow, reedy, insubstantial: ‘Greetings to you. … This is a recorded announcement, as I’m afraid we’re all out at the moment…'”