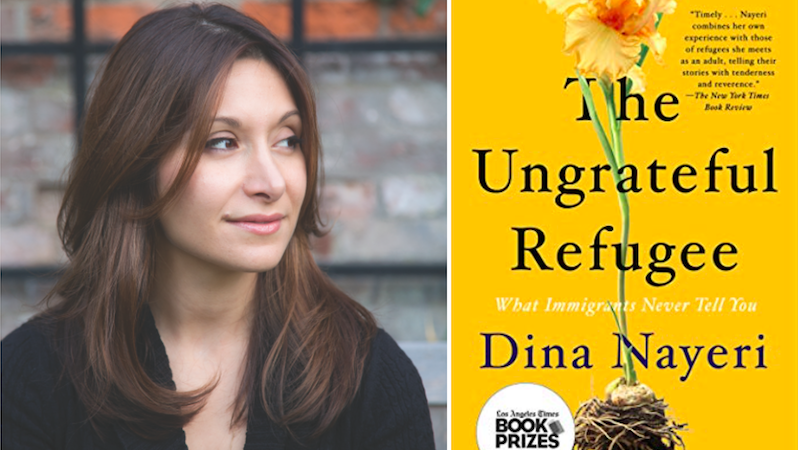 This week, we spoke to the author of The Ungrateful Refugee, Dina Nayeri.

Dina Nayeri: The Little Black Fish by Samad Behrangi. This was a subversive children’s book that my mother gave me as a child, about a little fish who sets out into the wide ocean. I think it slipped by the authorities as harmless early in my childhood, but was later banned.

DN: Charles Baxter’s The Art of Subtext. Actually, I re-read most of his craft books every few years as a refresher. In lazy moments, I forget the power of the unspoken. Recently I read a screenwriting book called Invisible Ink by Brian McDonald that will definitely go into my rotation, because it’s all about this: the power of the unspoken, establishing subtext.

DN: I think it’s much more in conversation with certain philosophers than it is with most modern books on immigration. John Rawls’ A Theory of Justice, for example, or Orwell’s essays.

DN: The History of Love Nicole Krauss and Women Talking by Miriam Toewes. “Blew my mind” isn’t a complete description of what these books did to me. They blew my heart.

DN: A book of the best plays from the Royal Court Theatre in London. I’m really into drama these days. I wrote a play over the spring lockdown! A whole play… And I adapted one of my own stories into a screenplay in the summer. I’m so proud of myself.

DN: Never Let Me Go by Kazuo Ishiguro. I was weeping as I turned the last page, and then my then-partner came home and thought I was being silly. We weren’t right for each other.

DN: Did this year happen? My relationship with time became pretty unhinged this year, so I’m going to say Aysegul Savas’s brilliant book Walking on the Ceiling even though technically it came out last year. Also, can I give a shout-out for an upcoming book? Her Here by Amanda Dennis! Pre-order it because it’s amazing.

DN: Wells Tower’s Everything Ravaged, Everything Burned and Sam Lypsite’s The Ask.

Actually Wells Tower assigned us the Lypsyte when he was teaching at Iowa. So I guess I just like his sense of humor. It’s subtle, and dry, and oh so devastating.

I also laugh out loud when I read Sedaris.

DN: Rilke’s Letters to a Young Poet. Maybe it could have helped me reject (even a little) the constant diet of sexual shame I was being fed by the church.

DN: Robert McFarlane’s Underland, because it’s gorgeously written, so profound and insightful, and also the hardback jacket is a piece of art. You could frame it.

DN: One Hundred Years of Solitude. I keep starting it and getting distracted by other books.

DN: A Sport and a Pastime. And Salter in general. I can’t quote any of it, because I’ll blush.

DN: Jokes for the Gunmen by Mazen Maarouf. It’s war from the surprising lens of a child, funny and sad and wonderful.

DN: Lord of the Flies by William Golding. I was so obsessed with that book in high school. I was a dark kid. I kept trying to figure out when exactly Ralph lost to Jack. And I was obsessed with all the biblical imagery and references. I loved that I could pass off my obsession with all the most gruesome and sordid bits as “bible study.” Hah!

DN: I’m reading a lot about adaptations now and have decided that I don’t want any of my favorites adapted.  Each medium is made for a different kind of story. Novels are good for internal struggle. Television and film are visual.  Great adaptations are their own art: they alter the original material fundamentally, keeping a nugget of the original idea, and maybe some scenes. But they’re not made to satisfy the fans of the book. And they shouldn’t be.

Dina Nayeri was born in Iran during the revolution and arrived in America when she was ten years old. She is the winner of the UNESCO City of Literature Paul Engle Prize and a National Endowment for the Arts literature grant, as well as a finalist for the Rome Prize and a Granta New Voices Project pick. Nayeri is the author of The Ungrateful Refugee: What Immigrants Never Tell You, out now in paperback from Catapult. She’s also the author of two novels—Refuge and A Teaspoon of Earth and Sea—and her work has been translated into fourteen languages and published in The New York Times, The Guardian, The Wall Street Journal, Granta, The Best American Short Stories, The O. Henry Prize Stories, and many other publications. The Ungrateful Refugee is her first book of nonfiction. A graduate of Princeton, Harvard, and the Iowa Writers’ Workshop, she lives in London. 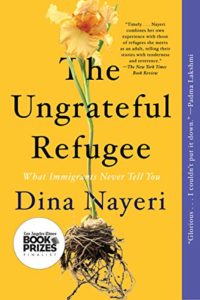