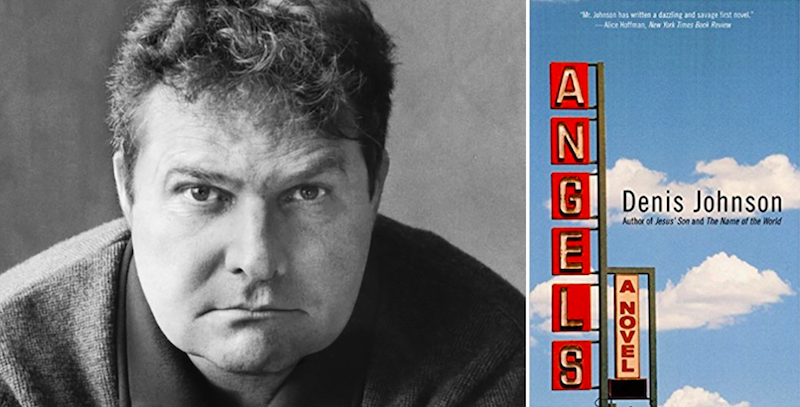 In her 1983 review, Alice Hoffman wrote that Johnson's Angels "is a terrifying book, a mixture of poetry and obscenity" 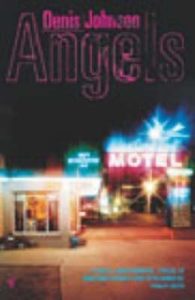 He got right down in the dark between heartbeats, and rested there.

“For many Americans, the man on the run from society often becomes a hero. We dream of those who ride across the desert searching for freedom or set out to cross the country alone. But this dream can easily sour, and when it does, it can become a coldblooded nightmare or a journey into absurdity…

The poet Denis Johnson’s stunning Angels is the story of people who slip helplessly into their own worst nightmares. Jamie Mays has left her husband in a trailer park in Oakland, Calif. She’s traveling with her two young daughters on a Greyhound bus when she meets Bill Houston. She is at first put off by his tattoos and silvered wraparound sunglasses. But loneliness and plain lack of energy throw them together, and they become lovers. After a terrifying time in Chicago (where Jamie is raped), they head for Arizona. There they find white-hot afternoons, yards filled with junked cars, the sort of religion that simmers with demons and—most dangerous of all—Bill’s family. 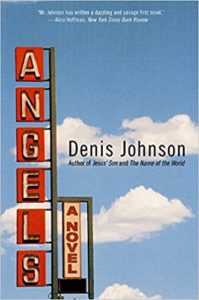 “His mother is a great believer in the inevitability of torment. She’s dutifully waiting for her husband to be released from a maximum security prison, and she’s so unlucky that a fortuneteller refuses to read her tea leaves. One of Bill’s brothers repossesses BMW’s and Cadillacs. Another, a heroin addict, lives with a religious fanatic. (‘The Lucifer rebellion was a big flop,’ she tells him at one point.) When the three brothers get together, it’s just a matter of time before things explode. As Jamie goes into a tailspin caused by pills and wine, the Houston boys plan and execute a bank robbery. Everything that can go wrong does. Once Bill starts shooting, he can’t stop, and he kills a guard: ‘Holding his gun out toward the guard and firing was something like spraying paint—trying to get every spot covered.’

Jamie ends up in a state mental hospital, and her stay there is brutally described. She’s eventually released, after she has figured out what the doctors want to hear—that her deepest desire is to own an economy car. But there’s no hope for Bill, now on death row. In a climactic and chilling scene, Bill faces his death in the gas chamber:

‘He was in the middle of taking the last breath of his life before he realized he was taking it. . . . He got right in the dark between heartbeats, and rested there. And then he saw that another one wasn’t going to come. That’s it. That’s the last. He looked at the dark. I would like to take this opportunity, he said, to pray for another human being.’ 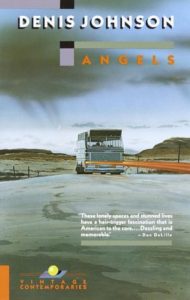 “Angels is a terrifying book, a mixture of poetry and obscenity. Some readers may be put off by its melodrama and nearly overwhelming sense of desperation. But whether the characters are conversing with a dark angel or ordering a platter of french fries, they are people who can’t be ignored. Mr. Johnson has written a dazzling and savage first novel.”