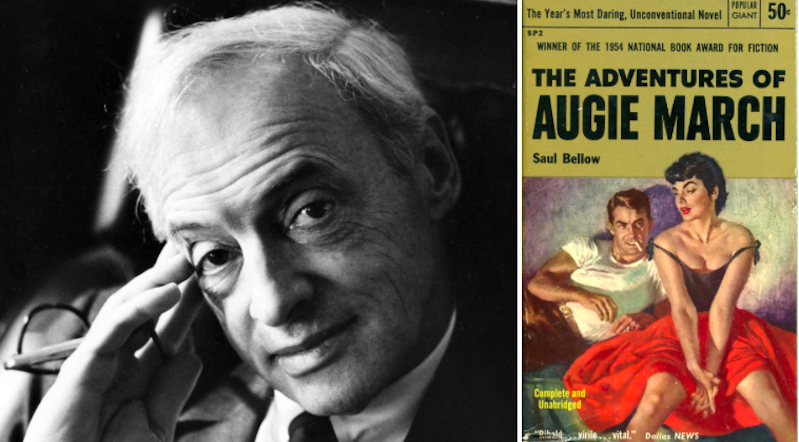 Dazzling but Difficult: Saul Bellow's The Adventures of Augie March 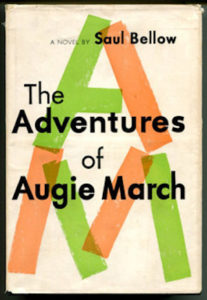 “Is love supposed to ruin you? It seems to me you shouldn’t destroy yourself out of life for purposes of love—or what good is it?”

“Augie March, a West-Side-Chicago Tom Jones, a Wilhelm Meister of the depression years, is a handsome and intelligent young man with what he himself describes as a ‘weak sense of consequence.’ He seems primarily moved by the need for love. One of his mistresses puts it more emphatically and indignantly. ‘You want people to pour love on you, and you soak it up and swallow it. You can’t get enough. And when another woman runs after you, you’ll go with her. You’re so happy when somebody begs you to oblige. You can’t stand up under flattery.’

But Augie has other, indefinable qualities which people who are more clearly defined, especially older ones, intuitively recognize. ‘It was often that way with me, that people would feel the world owed me distinctness.’ There is something adoptional about Augie. A remarkable series of strong characters try to take him over, fit him into their schemes. These schemes include everything from handling prize-fighters, stealing books, smuggling immigrants and selling army surplus in Europe, to organizing new CIO unions, guarding Trotsky in Mexico, training a moody eagle to hunt giant lizards and regenerating mankind by abolishing boredom. The projects are either accompanied or interrupted by affairs with strong-willed women who are wonderful lovers and often very rich besides. 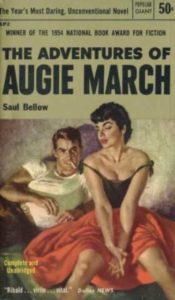 “Saul Bellow has been a teacher at the University of Minnesota, at Princeton and at Bard, and is also the author of Dangling Man and The Victim. In writing a long, crowded picaresque narrative of ups and downs of fortune, letting the hero tell his own life history in the first person, Mr. Bellow goes back to the earliest and most generic form of the novel. It is a form which has always been congenial to observant humorists who relish human variety, who are fertile in creating characters and who are not afraid to seem more interested in life than in art. If anything, Mr. Bellow is too lavish with adventures, though most of them are marvelously convincing. Augie goes through more intensities of experience than Defoe’s Colonel Jack and Smollett’s Roderick Random put together. And having been for a time to the University of Chicago, he muses on his experience in historical and philosophical terms which make those earlier heroes seem very simple-minded indeed.

“But the world which impinges in The Adventures of Augie March is so vivid and varied, and Augie himself is — up to a point — so impulsively active, that this novel does not have the sense of suspension, of waiting for something, which gave Mr. Bellow’s two earlier works their special atmosphere.

If this resistance to commitment, to identification, this alternation of involvement and detachment keeps Augie from having much substance as a person, it makes him an ideal observer, and a very typical one. From the beginning the anti-romantic, picaresque novel has been the history of such sharp-eyed, alienated individuals, without status, adrift in the great cities of post-Renaissance Europe. They had to survive by their wits, they saw life from beneath, and were quickly stripped of illusions. 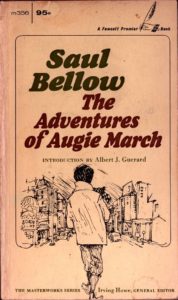 “Not since Dos Passos’ U.S.A. has there been in a novel such an enormous range of discriminating reporting as in this one. When Augie remembers, he sees everything ‘down to an ant in the folds of bark.’ The crowding of descriptive epithets and hyphenizations recalls Hopkins’ The Leaden Echo and the Golden Echo. The bravura paragraphs of philosophizing are dazzling but sometimes rather difficult.

In writing to H.G. Wells to praise qualities very like some of those which Mr. Bellow displays in this novel, Henry James could not help deploring ‘that accurst autobiographic form which puts a premium on the loose, the improvised, the cheap and the easy.’ A series of events do not make a dramatic whole just because they happen to one man, and if a man’s life seems to have an underlying pattern, the man himself is usually not the one best able to discern it. The more Augie does and the further he leaves his childhood behind, thee less clearly the reader sees what his life comes to.

The complexities of the events and the tenseness of the style keep The Adventures of Augie March from seeming cheap and easy, but James’ two other adjectives do apply. 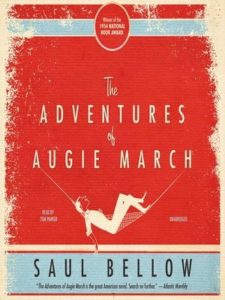 “…the book is in a sense unfinished. But if it ends without Augie’s either finding or transcending himself, it leaves him with the conviction that both achievements are possible, and that they may be simply different names for the same thing.”