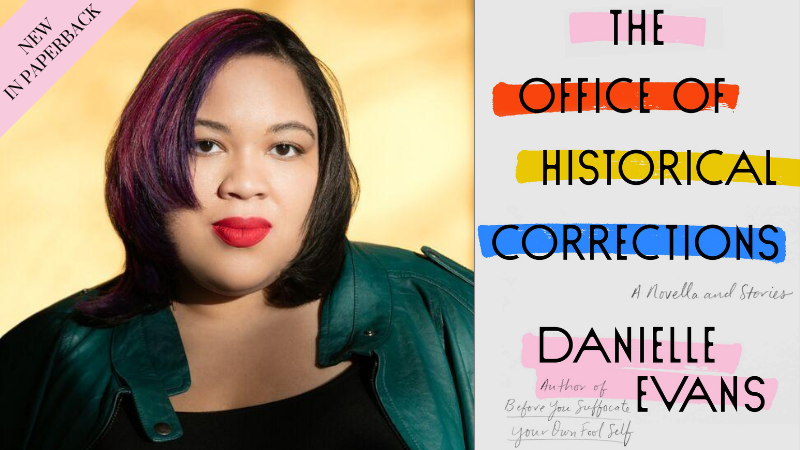 This week, we spoke to the author of The Office of Historical Corrections (out tomorrow in paperback), Danielle Evans.

Danielle Evans: I mean, the very first book I remember loving was a picture book about a lion. Some of the pages had a circle cut out in the middle so that you could put your own face into the book and roar like a lion.

DE: I reread Sister Carrie this week because I’m teaching it.

DE: The Final Revival of Opal & Nev by Dawnie Walton.

DE: How to Leave Hialeah by Jennine Capó Crucet.

DE: Quicksand by Nella Larsen. I think there would have been both reassurance and a lesson in Helga Crane running all over the world trying to run away from herself.

DE: I’m afraid that giving my most honest answer here would get me into too much trouble so I’m keeping my mouth shut! I’m not going to be the Twitter main character of the day! Instead can I talk about a book I thought I hated? When I first read it, I thought I hated Romeo & Juliet. I hated it so much it made me suspicious of the whole Shakespeare project, though I had to give him credit for Julius Caeser and Hamlet. It had been taught to us a great romance, and it’s a terrible romance! But then I heard someone talk about it as a book in which the romance is supposed to feel a little ridiculous and the tragedy is teenagers dying over obsessive and fleeting infatuation in a toxic landscape where everyone, adults included, is making terrible choices and I reread it, and I got it. It was a reminder to learn to separate whether, when I’m annoyed with a book, I’m reacting to the book or to something said about the book or something the book has been forced into representing.

DE: This question is so fraught! People sometimes tag me when they’re shouting out one of my books as an answer to this question, and it’s like thank you, but also excuse me? I’ll go with a book by someone who is no longer with us to have their feelings hurt: Charles Chesnutt’s The Wife of His Youth.

DE: A Tree Grows in Brooklyn.

DE: I’m reading a nonfiction book called Waltzing in the Dark by Brenda Dixon Gottschild along with some other work on Black vaudeville performers.

DE: The Little Engine that Could.

Danielle Evans is the author of the story collections The Office of Historical Corrections and Before You Suffocate Your Own Fool Self, winner of the 2021 Joyce Carol Oates Prize, the PEN America PEN/Robert W. Bingham prize, the Hurston/Wright Legacy Award, and the Paterson Prize, and a National Book Foundation 5 under 35 honoree. Her stories have appeared in many magazines and anthologies, including The Best American Short Stories. She teaches in The Writing Seminars at Johns Hopkins University. 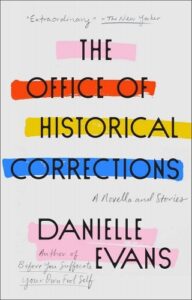