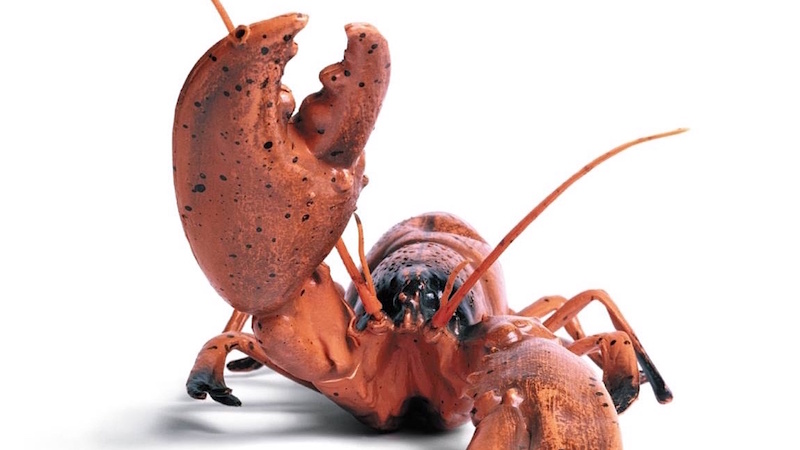 Consider the Lobster and DFW's Nostalgia for a Lost Meaningfulness

Pankaj Mishra, in his New York Times review, writes about the "attractive mix of mordancy and humorous ruefulness" that characterizes Wallace's 2006 essay collection 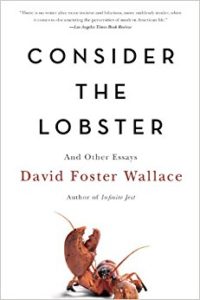 In reality, there is no such thing as not voting: you either vote by voting, or you vote by staying home and tacitly doubling the value of some Diehard’s vote.

“Reading David Foster Wallace’s new collection of magazine articles, you could be forgiven for thinking that the author of such defiantly experimental fictions as Infinite Jest (1996) and Oblivion (2004) has been an old-fashioned moralist in postmodern disguise all along. The grotesqueries of the 15th annual Adult Video News Awards, which Wallace writes about at considerable length here, present an easy target. And so, to a lesser extent, do the corruptions of English usage in America and the right-wing radio host John Ziegler. But Wallace poses an unsettling challenge to the way many of us live now when, while visiting the Maine Lobster Festival on behalf of Gourmet magazine, he asks if it is ‘all right to boil a sentient creature alive just for our gustatory pleasure.’ His longing for the apparently rare virtues of frankness and sincerity in public life makes him admire John McCain, despite the senator’s ‘scary’ right-wing views.

Turning to literature in essays on Kafka, Dostoyevsky and Updike, Wallace employs a largely moral vocabulary to dismiss such older American novelists as Norman Mailer and Philip Roth as ‘Great Male Narcissists.’ For him, Updike is ‘both chronicler and voice of probably the single most self-absorbed generation since Louis XIV.’ In contrast, he is all praise for Dostoyevsky, largely because the Russian writer’s ‘concern was always what it is to be a human being—that is, how to be an actual person, someone whose life is informed by values and principles, instead of just an especially shrewd kind of self-preserving animal.’

Indeed, reading Dostoyevsky revives Wallace’s old complaint that American writers face an unparalleled difficulty in trying to create a literature informed by ethical values and principles. In an earlier essay titled ‘E Unibus Pluram: Television and U.S. Fiction,’ Wallace claimed that television in its more sophisticated phase had appropriated the ‘rebellious irony’ of the first postmodern writers (Pynchon, Barthelme, Gaddis, Barth), thereby pre-empting and defusing the ‘critical negation’ that was the literary and moral responsibility of his generation of writers. More than a decade later, Wallace remains convinced that ‘many of the novelists of our own place and time look so thematically shallow and lightweight, so morally impoverished, in comparison to Gogol or Dostoyevsky.’

This is strong stuff—Wallace’s blithely assertive manner helps him cover much rhetorical ground very quickly, even if a firmer belief in understatement might have helped him avoid such unhelpful generalizations as ‘our present culture is, both developmentally and historically, adolescent.’ Given such vehemence, it seems fair to point out that compared with the Russian masters, most novelists of any time or place are likely to look shallow and lightweight. And, at their best, the Great Male Narcissists have appeared to possess the ‘degrees of passion, conviction and engagement with deep moral issues’ that for Wallace distinguish the Russians from contemporary American writers. 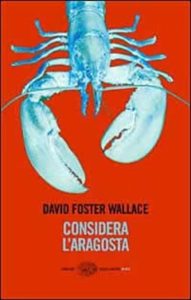 “You also wonder if television could really have squandered the ironic self-consciousness that was supposed to be Wallace’s spiritual inheritance from the postmodernists. But there is not much point in denying Wallace his passion, his outraged sense that he has arrived much too late in history. For it is Wallace’s nostalgia for a lost meaningfulness—as distinct from meaning—that gives his essays their particular urgency, their attractive mix of mordancy and humorous ruefulness.

This nostalgia explains, among other things, his attraction to the straight-talking senator from Arizona. Originally written for Rolling Stone, and reproduced in full here, his description of the week of the primaries during which McCain failed to survive Karl Rove’s negative campaign is the strongest piece in this collection. Although Wallace never gets to meet his subject, he manages to show just how political spin-doctoring has evolved since 1972, when Timothy Crouse (in The Boys on the Bus) and Hunter Thompson (in Fear and Loathing on the Campaign Trail) covered the clumsy attempts at it by the Nixon and McGovern campaign staffs. He is bracingly insightful, too, about the equally cynical process whereby representatives of major TV networks and the mainstream press ‘select’ their news.

But so vast is Wallace’s intellectual energy and ambition that he always wants to do more than what anyone else can reasonably achieve in a magazine article—and he has some enviably indulgent editors. He wishes, as much in his nonfiction as in his fiction, ‘to antagonize,’ as he said in an interview in 1993, ‘the reader’s sense that what she’s experiencing as she reads is meditated through a human consciousness.’ Accordingly, Wallace appears as a character in his own reportage, and, though he may not like the comparison to a Great Male Narcissist, he reminds one most of the author of Armies of the Night as he strives for full self-disclosure. 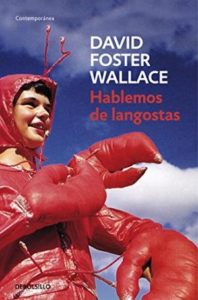 “He tells us, in eye-straining small print, how and why the McCain piece was commissioned and edited, and what the ‘dozen high-end journalists’ who were with him looked like. This is the kind of ironic self-consciousness one would ordinarily be relieved to see confined to Friends and Seinfeld. Happily, Wallace’s dazzling powers of description often redeem his bloggerlike tendency to run on. Here, for instance, is his description of a New York Times reporter on the McCain campaign: ‘A slim calm kindly lady of maybe 45 who wears dark tights, pointy boots, a black sweater that looks home-crocheted and a perpetual look of concerned puzzlement, as if life were one long request for clarification.’

Clarification is also what Wallace seeks, though not of the political kind. It may seem odd that he doesn’t mention McCain’s voting record in the Senate—the clearest indication of the candidate’s politics, perhaps even of his sincerity or lack thereof—in an article more than 15,000 words long. But then he wants, above all, to figure out ‘whether John McCain is a real leader or merely a very talented political salesman, an entrepreneur who’s seen a new market niche and devised a way to fill it.’ He credits McCain’s appeal among the young to the fact that they are ‘starved’ for ‘just some minimal level of genuineness in the men who want to ‘lead’ and ‘inspire’ them.’ He himself thinks it a ‘huge deal’ that McCain, a former fighter pilot who bailed out over Hanoi, rejected, on pain of torture, an offer of unconditional release from his Vietnamese captors.

Wallace keeps stressing this exemplary war record, which seems sufficient proof to him of McCain’s moral authority, if not of his political judgment. And much of the essay really works out the tension between Wallace the postmodernist obsessed with ‘packaging and marketing and strategy and media and spin,’ and Wallace the moralist seeking evidence of a rooted and authentic self. It is as though Wallace cannot stop expecting McCain to somehow transcend the deceptions and distortions of the spin doctors and the media and remain true to himself: to the McCain who refused to leave prison in Vietnam, and whose moral character has survived an even longer confinement inside the Beltway.

Wallace is never sure if McCain is ‘truly “for real.” ‘ But such doubts, repeatedly expressed, merely reveal the larger cultural assumption Wallace is working with: that some fixed essence—the real McCain—lies beyond the wilderness of signifiers unleashed by the spin doctors and the media, and that somewhere out there this all-American hero still exists, untouched by the compromises and expediencies of everyday politicking, and busily realizing the countercultural ideal of ‘authenticity.’ 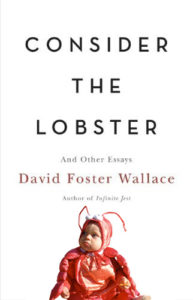 “A conventional, rather masculinist notion of personal identity and selfhood also infiltrate Wallace’s review of the tennis player Tracy Austin’s autobiography. Here, he mistakes precociously and ruthlessly honed skill in a commercialized sport for ‘genius.’ As he doggedly examines why Austin’s child-prodigy brilliance as a tennis player does not translate into emotional and intellectual profundity, it is hard not to be reminded of Robert Musil’s epic Man Without Qualities (1943), in which the protagonist, Ulrich, is disturbed enough by the journalistic imputing of genius to sportsmen and racing horses to renounce his ambition for personal greatness.

Writing in the late 1920’s, Musil recalled a recently superseded culture in which greatness ‘was exemplified by a person whose courage was moral courage, whose strength was the strength of a conviction, whose steadfastness was of heart and virtue, and who regarded speed as childish . . . and agility and verve as contrary to dignity.’

Wallace does not have this sense of history, which was indispensable to a moralist like Musil—or, indeed, Mencken, Wallace’s precursor in the distinguished American tradition of boisterous iconoclasm. What he has instead is nostalgia, for a time when writers possessed moral courage and conviction, and it is no less affecting. Still, it doesn’t seem to liberate him entirely from the prejudices and assumptions of his own historical moment—and class. Something of the graduate-school seminar room still clings to his worldview. Trying to explain, for instance, why many American writers have ‘an ironic distance from deep convictions or desperate questions,’ he concludes that the modernists ‘elevated aesthetics to the level of ethics’ and writers thereafter have had to meet the ‘requirement of textual self-consciousness imposed by postmodernism and literary theory.’

Literary theorists may long for, but have never actually possessed, such power and influence. If some American writers have a carefully hedged relation with actuality, or prefer an evasive irony over passionate engagement, this has at least something to do with their membership, in these days of generous publishing advances, fellowships and grants, in their country’s most privileged classes. Wallace is clearly an exception. Certainly, few of his young peers have spoken as eloquently and feelingly as he has about the hard tasks of the moral imagination that contemporary American life imposes on them. Yet he often appears to belong too much to his own times—the endless postmodern present—to persuasively explain his quarrel with them.”