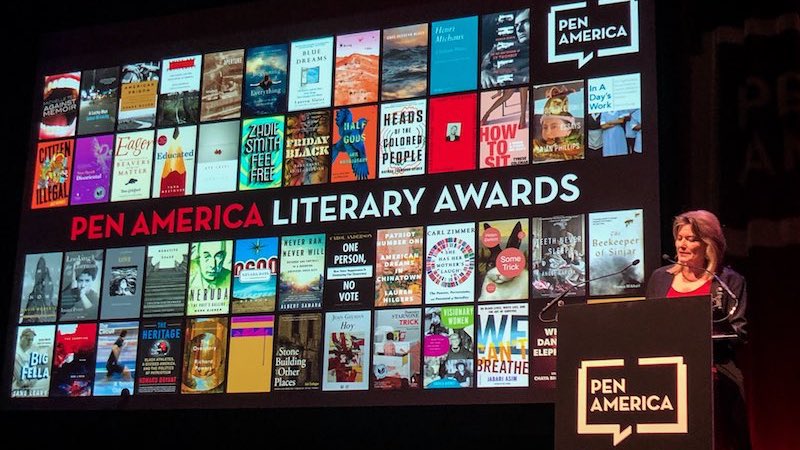 Rowan Ricardo Phillips, Nana Kwame Adjei-Brenyah, Michelle Tea, and Nafissa Thompson-Spires were among those who took home awards at the ceremony last night

Last night at a packed ceremony at NYU’s Skirball Center in New York City, PEN America announced the winners of its 2019 literary awards.

The evening began with acclaimed Mexican-American writer and author of The House on Mango Street Sandra Cisneros receiving the PEN/Nabokov Award for Achievement in International Literature. Later on Jackie “Mac” MacMullan was given the ESPN Lifetime Achievement Award for Literary Sportswriting; twelve young writers were recognized with the PEN/Robert J. Dau Short Story Prize for Emerging Writers; Katherine Seligman won the 2019 PEN/Bellwether Prize for Socially Engaged Fiction; the PEN/Laura Pels International Foundation Award for Drama was awarded to Larissa FastHorse; the inaugural PEN/Mike Nichols Writing for Performance Award was given to Kenneth Lonergan; Jonah Mixon-Webster was presented with the PEN/Joyce Osterweil Award for Poetry; Apogee Executive Editor Alexandra Watson received the 2019 PEN/Nora Magid Award for Editing; and the PEN/Phyllis Naylor Working Writer Fellowship was awarded to Noni Carter.

Below you’ll find the winners of the 10 main book categories, as well as an illuminating review of each title.

Congratulations to all the winners and nominees! 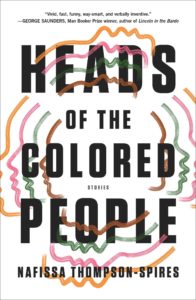 “Clever, cruel, hilarious, heartbreaking, and at times simply ingenious, Thompson-Spires’s experimental collection poses a simple, yet obviously not-simple, question: what does it mean to be a black American in this day and age? … Thompson-Spires’s metafictional satires, oriented around questions of blackness, join a particular tradition of African-American fiction, recalling the sardonic absurdism of Everett’s Erasure and Paul Beatty’s The Sellout, among others … Not all of Thompson-Spires’s stories are overtly satirical, and they become progressively more serious as the collection progresses, but a thread of outrageous, glaring self-awareness runs through the collection, granting even many of the more severe tales a tone of dark comedy … Thompson-Spires, thankfully, depicts a wide range of people, not seeking either overwhelmingly positive or negative images of a race but capturing diversity—reality—in much of its multifarious beauty and terror … The real heads, of course, as this brilliant collection of word paintings displays, can be on anybody’s bodies.”

“Unlike John McPhee’s Levels of the Game or, more recently, L. Jon Wertheim’s Strokes of Genius, both of which chronicle individual matches to plumb the depths of professional tennis, Phillips takes a broader perspective to explore a pivotal year in men’s tennis … Phillips reveals his love of tennis on every page. There is a generosity of spirit toward the reader as he explains the tournament calendar, how the A.T.P. ranking system works and how important seedings are in Grand Slam draws. He even includes a comprehensive glossary of tennis terms … [Phillips’] description of the contrasting styles of Federer and Nadal is incisive, lucid and inspired … [Phillips’] prose becomes lyrical as he transmits the shot-by-shot drama of the match. It’s what makes The Circuit such a joy to read: a poet’s love song to the game of tennis.” 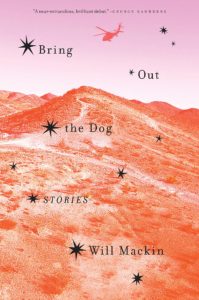 Bring Out the Dog, Will Mackin
(Random House)

“Will Mackin’s Bring Out the Dog is one such collection that cuts through all the shiny and hyped-up rhetoric of wartime, and aggressively and masterfully draws a picture of the brutal, frightening, and even boring moments of deployment … The Things They Carried, Redeployment, and now Bring Out the Dog; war stories for your bookshelf that will last a very long time, and serve as reminders of what America was, is, and can still become.”

PEN/Diamonstein-Spielvogel Award for the Art of the Essay ($10,000)

“…the best essay collection I’ve read in years … Tea’s reporting from Camp Trans is the opposite of the broad and ignorant way that gender nonconformity is written about in mainstream news outlets. It is done from a position of deep understanding, of detail … Tea honors the HAGS gang because it’s personal, because it’s important, and because the bad, hard, beautiful life of poor queers doesn’t make it into history. Her writing about butch-femme romance extends one hand back to the history of punk lesbian publishing and another forward, into the future. She writes the lives of the SM dykes, the trans women excluded by normative lesbians, the poor butches who are for some reason never, ever on television. Swagger is a way of walking away from, or through, the tough conditions of a heteronormative world. If Tea over-romanticizes that walk for a moment, it’s a small price for so much truth.” 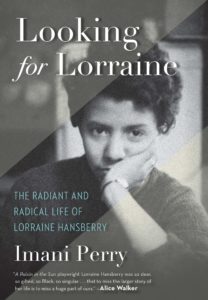 “…Perry mines Hansberry’s life, her indefatigable radicalism, and her queerness, and she prods us to consider what this fuller portrait of a categorically transgressive figure reveals about the state of social justice today … While Hansberry’s family lived comfortably…she quickly learned, as a child, that her relative prominence was no armor against a racist world … Jim Crow threatened all black Americans, class or any other scraping of privilege be damned, profoundly shaped Hansberry’s broad black consciousness. Years later, at a rally in 1963, she declared that ‘between the Negro intelligentsia, the Negro middle class, and the Negro this-and-that—we are one people. … As far as we are concerned, we are represented by the Negroes in the streets of Birmingham!’ … In fitting herself into Hansberry’s story with autobiographical elements, Perry offers a bracing air of familiarity and urgency around the artist, whose legacy has faded since her death from cancer in 1965. By crisscrossing then and now, Perry insists how important it is that our connection to this history—to Hansberry—survive.”

Eager: The Surprising, Secret Life of Beavers and Why They Matter, Ben Goldfarb
(Chelsea Green)

“His entirely captivating new book…is surely the most passionate, most detailed, and most readable love-note these dour furry little workaholics will ever get … He relates the intricacies of their natural history with enormous, happy energy—this is the ultimate start-here book for anybody interested in beavers—and he makes the strongest case yet for the extensive benefits beavers provide for their wider surroundings, far more extensive benefits than are typically attributed to these anti-social little brutes. And through it all, Goldfarb maintains a level of fandom that’s downright charming. Eager is a fascinating snapshot of the beaver’s current conservational moment, and it’s a thought-provoking exploration of the benefits beavers bring to the land.” 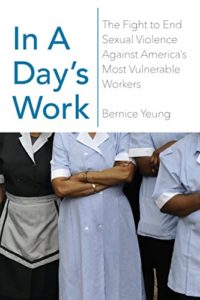 In a Day’s Work, Bernice Yeung
(The New Press)

“Bernice Yeung relates [these] stories…with candor and compassion … She balances them with comprehensive research on labor law, rape and sexual assault legislation, and the additional burdens borne by undocumented women workers … Yeung’s book provides crucial information and insight about this ‘long-held open secret,’ making it a must-read for union organizers, advocates, policy makers and legislators—and all of us.”

“Love, a trim and electrifying novel … is undergirded by the present tense and made incandescent by Orstavik’s seemingly effortless omniscient perspective, sometimes switching between Jon’s mind and Vibeke’s from sentence to sentence … Orstavik’s mastery of perspective and clean, crackling sentences prevent sentimentality or sensationalism from trailing this story of a woman and her accidentally untended child … The primeval darkness of the forest looms, biting as the cold that seems a character throughout this excellent novel of near misses.” 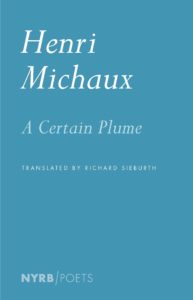 A Certain Plume, Henri Michaux
Translated from the French by Richard Sieburth
(NYRB)

“…with Richard Sieburth’s excellent contemporary and colloquial translation of the entirety of the 1930 publication, with facing-page French, we finally have an opportunity to read all thirty-four texts of this 20th-century classic in their original order and setting—and indeed, to read quite a few that were previously untranslated … Certain Plume is the fourth full-length work by Michaux that Sieburth has rendered into English; his experience with the author and long academic and translating career has made his afterword particularly worth attending to. It eruditely situates the book in its literary surround, provides close readings of some pieces, and sketches the biographical backstory that accounts, in part, for the collection’s abundance of death and mayhem.”