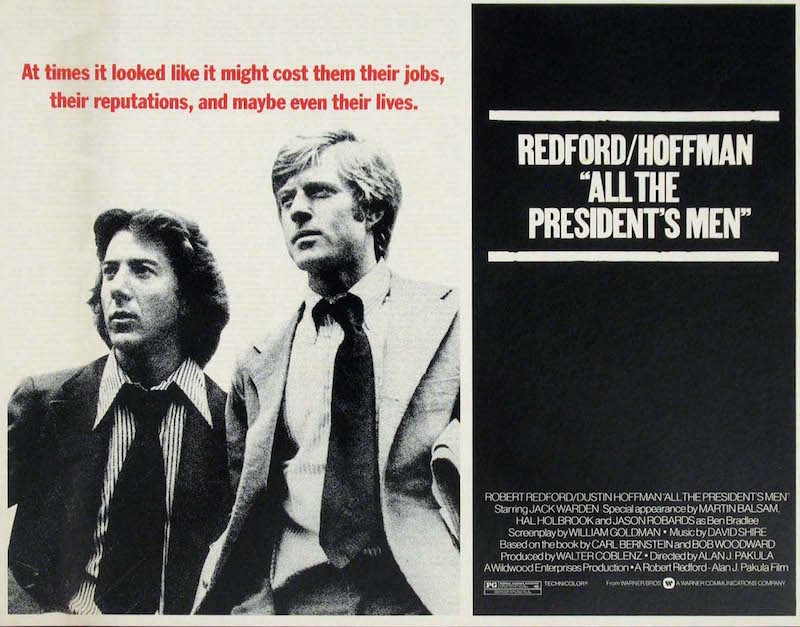 Bringing down a president 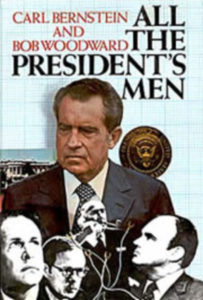 “…basically this is the explanation of how the Watergate story was developed by two young Washington Post reporters whose repeated double-byline on the front page of the paper was gleefully collapsed by their colleagues into ‘Woodstein.’

Woodward and Bernstein have their rewards — a Pulitzer Prize (awarded not to them but to their newspaper), considerable fame, a fortune in the making (Robert Redford has bought the movie rights to this book for a reported $450,000, and paperback rights brought a healthy $1 million), and the satisfaction of an important job done extraordinarily well. But their book is our reward — ‘we’ being reporters everywhere.

It is our reward because it demonstrates that American journalism can be, and in its crucial hour was, conducted with the highest standards of ethics, the greatest concern for public interest, and a near-suicidal commitment to the pursuit of truth and justice. Which is not to say that the protagonists here were saintly. They made errors of fact; in frustration they compromised at least one of their sources; they substituted political considerations for journalistic ones in determining whether and when to go with a story. The language in the Washington Post’s newsroom was often as salty as that in the Oval Office. But unlike the President’s men, the men and women of the Post treated the honor of their profession not as window dressing but as their stock in trade.

“The book itself is a delight. It is next to impossible to write a first-person account in the first-person plural, and the writers adopt the happy expedient of writing in the third person, so that the references are to ‘Bernstein’ or ‘Woodward’ but never to ‘we’ or ‘us.’ The result allows for passages such as ‘Bernstein knew that Woodward couldn’t write very well. One office rumor had it that English was not Woodward’s native language.’

In the course of a gripping narrative, rather like a good detective story, we are treated to gossipy peeks behind the scenes of power in Washington. More important, we are treated to a detailed description of the process of digging out news in Washington that no one in authority wants to have dug out. White House complaints about ‘source stories’ — stories unattributed to named individuals — would have had us believe that the Post’s reporters were typical Washington ‘leaks’ being retailed by the President’s enemies. On the contrary, we learn, their sources were far from anxious to talk, hardly ever told all they knew, and had to be cajoled, pampered, browbeaten or tricked into talking at all. Only one source, the still-mysterious government official code-named ‘Deep Throat,’ had an overview of the situation, and even he would rarely go beyond confirming information the reporters had obtained elsewhere.

“One of the curiosities of the two reporters’ story is that it is as much a search for the right questions as it is a search for the answers. It took the reporters nearly four months before they began to ask themselves, much less anyone else, whether it was possible that the Mister Big of this plot could be the President of the United States.”