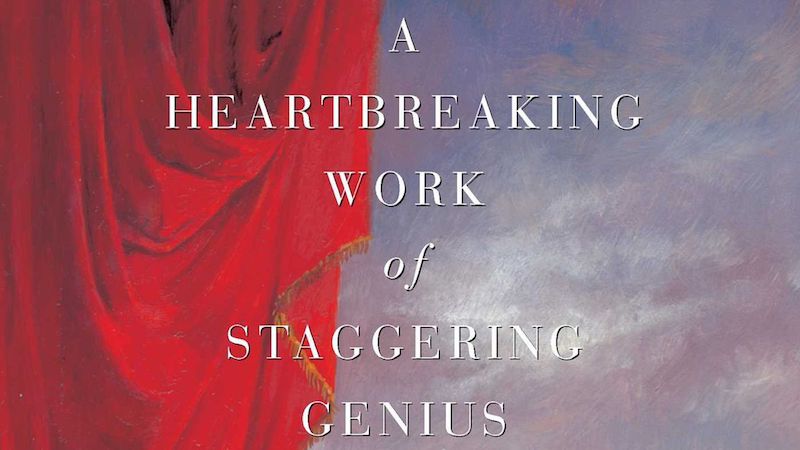 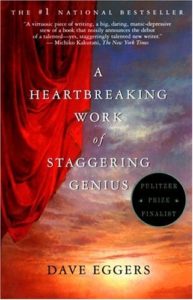 I like the dark part of the night, after midnight and before four-thirty, when it’s hollow, when ceilings are harder and farther away. Then I can breathe, and can think while others are sleeping…

“The general thrust of Mr. Eggers’ very fine new book, besides fate’s maddeningly random cruelties, is how Mr. Eggers and other media-savvy, well-educated young people make their way in the world: They fake it. By holding the roles fate forces them to play (parent, wage earner, MTV ‘Real World’ cast member) at arm’s length, Mr. Eggers and his contemporaries mock and inhabit their lives at the same time, living compromised lives like everyone else, but paradoxically on their own terms. We root for Mr. Eggers as he reinvents the role of parent in A Heartbreaking Work of Staggering Genius. But like the dads we wish we had, and like the dads we all long to be (and can’t be), Mr. Eggers’ dual roles as sibling and father figure allow him to alternately play dad and best friend, wearing both roles lightly. If only to spite Jedediah Purdy, it is Mr. Eggers’ life-affirming cynicism and sense of irony that allow him to embrace his adult responsibilities.

That Mr. Eggers can keep his sense of irony alive while his parents are dying and then continue to keep it alive once he has stepped into the normally irony-free roles of parent, breadwinner and provider is no small achievement. Mr. Eggers knows that parenthood is a joke the universe has played on him, but he manages to pull off an amazing double-cross, turning parenthood into a joke that he’s playing on the universe (or, at the very least, on Simon & Schuster). 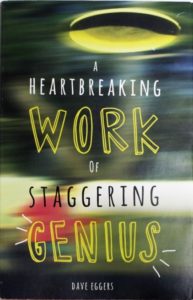 “What’s most amazing about Mr. Eggers’ very fine new book, what staggers the reader and justifies the book’s title, cover art and position on the New York Times bestseller list, is how thoroughly Mr. Eggers’ self-deprecating tone and narrative tricks suck the reader in. Mr. Eggers allows us to remain as wary of cheap sentiment as he himself clearly is, paying us the compliment of not presuming we’ll weep on cue, like Oprah’s studio audience. Mr. Eggers doesn’t rely on the facts of his family tragedy or on his readers’ too-often-taken-for-granted empathy. He dares to entertain us, and then, once we’ve let our guard down, his very fine new book breaks our motherfucking hearts.

In fact, I challenge anyone to read even the first chapter of Mr. Eggers’ very fine new book and remain unmoved.”