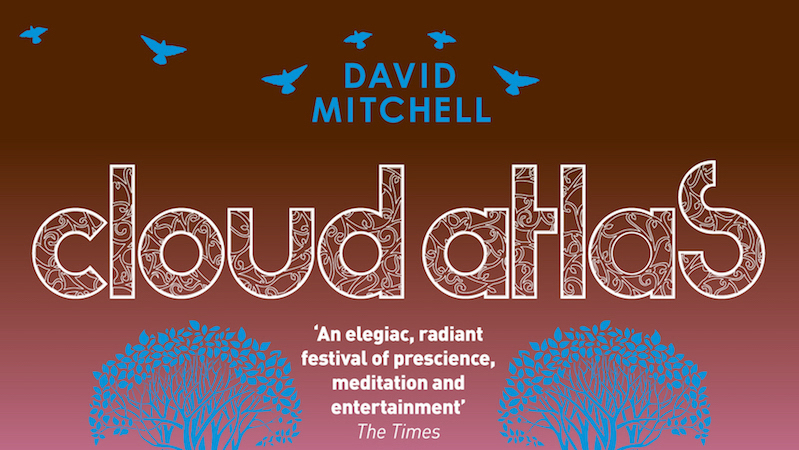 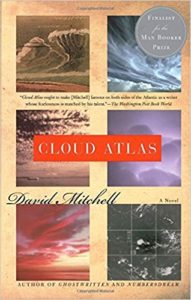 Our lives are not our own. We are bound to others, past and present, and by each crime and every kindness, we birth our future.

“David Mitchell entices his readers on to a rollercoaster, and at first they wonder if they want to get off. Then—at least in my case—they can’t bear the journey to end. Like Scheherazade, and like serialised Victorian novels and modern soaps, he ends his episodes on cliffhangers and missed heartbeats. But unlike these, he starts his next tale in another place, in another time, in another vocabulary, and expects us to go through it all again. Trust the tale. He reaches a cumulative ending of all of them, and then finishes them all individually, giving a complete narrative pleasure that is rare.

“Cloud Atlas is powerful and elegant because of Mitchell’s understanding of the way we respond to those fundamental and primitive stories we tell about good and evil, love and destruction, beginnings and ends. He isn’t afraid to jerk tears or ratchet up suspense – he understands that’s what we make stories for. Cavendish, considering ‘The First Luisa Rey Mystery,’ imagines a critic saying: ‘But it’s been done a thousand times before,’ and snarls to himself, ‘as if there could be anything not done a hundred thousand times between Aristophanes and Andrew Void-Webber! As if Art is the What, not the How!’ This is a half-truth—Cavendish has the limitations of his place in culture, history and this novel—but it does associate works of art, and novels, with the eternal recurrences of culture and human nature.

Mitchell is indeed both doing what has been done a hundred thousand times before and doing it differently. He plays delicious games with other people’s voices, ideas and characters.

“He is good at imagining the details of these hypothetical lives—not only the food and the rituals, but the moral atmospheres and the automatic assumptions. But his great feat is the variation in rhythms, which sweeps away any readerly objection to yet another brave new world.” 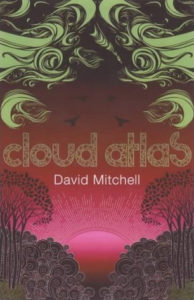 “Hopscotching over centuries, Cloud Atlas likewise jumps in and out of half a dozen different styles, all of which display the author’s astonishing talent for ventriloquism, and end up fitting together to make this a highly satisfying, and unusually thoughtful, addition to the expanding ‘puzzle book’ genre.

Novels whose plots hinge on intricate puzzles are all the rage these days, but the puzzle of Cloud Atlas isn’t in the book, it is the book. What appears at first glance to be a novel is in fact six novellas whose interrelatedness is only hinted at during the book’s first half, then revealed fully and splendidly after the book’s middle, which is really the book’s end. Confused? You’re supposed to be, at least for a little while: It’s from this starting point of dislocation that Mitchell begins a virtuosic round trip through the strata of history and causality, exploring the permanence of man’s inhumanity to man and the impermanence of what we have come to call civilization.

“…sometimes novels filled with big ideas require equally big mechanisms for relaying them, and it’s hard to imagine an idea bigger than the one Mitchell is tackling here: how the will to power that compels the strong to subjugate the weak is replayed perpetually in a cycle of eternal recurrence. Rarely has the all-encompassing prefix of ‘metafiction’ seemed so apposite. Here is not only the academic pessimism of Marx, Hobbes and Nietzsche but also the frightening portents of Aldous Huxley and the linguistic daring of Anthony Burgess. Here, too, are Melville’s maritime tableaux, the mordant satire of Kingsley Amis and, in the voice of Robert Frobisher—Mitchell’s most poignant and fully realized character—the unmistakable ghost of Paul Bowles. Here is a veritable film festival of unembarrassed cinematic references and inspirations, from Soylent Green to One Flew Over the Cuckoo’s Nest to The Graduate to the postwar comedies of England’s Ealing Studios. Here is an obviously sincere affection for the oft-maligned genres of mystery, science fiction and fantasy.

All of these influences, and countless others, gel into a work that nevertheless manages to be completely original. More significantly, the various pieces of David Mitchell’s mysterious puzzle combine to form a haunting image that stays with the reader long after the book has been closed. Cloud Atlas ought to make him famous on both sides of the Atlantic as a writer whose fearlessness is matched by his talent.” 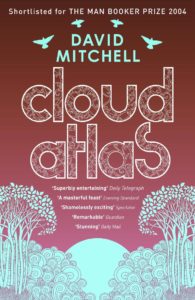 “Cloud Atlas imposes a dizzying series of milieus, characters and conflicts upon us: a ship sailing amid some islands around New Zealand during the mid-19th century, wherein an American notary named Adam Ewing befriends, at risk to himself, a stowaway Moriori named Autua; a Belgian estate called Zedelghem in the 1930’s, wherein a sexually indecisive aspiring composer named Robert Frobisher serves as amanuensis to an older, more accomplished composer; California during the 1970’s, wherein a plucky journalist named Luisa Rey attempts to disclose an Erin Brockovich-style industrial conspiracy; London during the here and now, wherein a 60-ish book editor named Tim Cavendish finds himself accidentally imprisoned in a home for the elderly; Korea in the (just) foreseeable future, wherein a genetically engineered ‘fabricant’ named Sonmi-451 is interrogated for her crime of wanting to be fully human; and Hawaii in some distant and thoroughly annihilated future, wherein a young goatherd named Zachry bears unknowing witness to the final fall of humanity into superstition and violence and war.

With the exception of Zachry’s tale, the book’s thematic centerpiece, we visit each of these stories twice, in the following order: 1, 2, 3, 4, 5, 6, 5, 4, 3, 2, 1. Each story is written quite differently—so much so that Cloud Atlas feels like a doggedly expert gloss on various writers and modes. The archaic Ewing section, rendered in journal form, becomes Defoe, possibly Melville. The epistolary Frobisher story is, perhaps, Isherwood or some other sturdy English master. The Luisa Rey section, written in breathlessly lousy prose, is some species of sub-Grisham. The urban comedy of Tim Cavendish’s antics is well within Martin Amis’s city limits. The plight of Sonmi-451 is Huxley (or Blade Runner). And the daymare of Zachry’s postapocalyptic world is something out of William S. Burroughs in a Cities of the Red Night mood. Taken as a whole, Cloud Atlas seeks to give the novel a steely new rigging of the possible. It is an impressive achievement. Unfortunately, impressive is usually all that it is.

It is a devious writer indeed who writes in such a way that the critic who finds himself unresponsive to the writer’s vision feels like a philistine. So let it be said that Mitchell is, clearly, a genius. He writes as though at the helm of some perpetual dream machine, can evidently do anything, and his ambition is written in magma across this novel’s every page. But Cloud Atlas is the sort of book that makes ambition seem slightly suspect.

To write a novel that resembles no other is a task that few writers ever feel prepared to essay. David Mitchell has written such a novel—or almost has. It its need to render every kind of human experience, Cloud Atlas finds itself staring into the reflective waters of Joyce’s Ulysses. Just as Joyce, in the scene that takes place in the cabman’s shelter, found the hidden beauty of cliché-filled prose, so Mitchell does with his Luisa Rey story. Just as Joyce, in the late scene in which Bloom and Dedalus finally sit down together, explored the possibilities of a narrative driven by interrogation, so Mitchell does with his ruthlessly grilled ‘fabricant,’ Sonmi-451. Cloud Atlas is friendlier than Ulysses but far less fallibly human. If Mitchell’s virtuosity too often seems android, one suspects this says less about his achievement and more about the literature of formal innovation. This is a book that might very well move things forward. It is also a book that makes one wonder to what end things are being moved.”