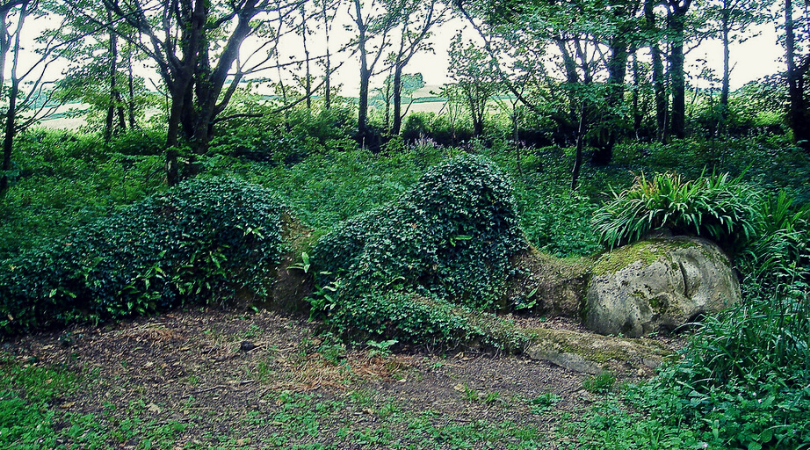 13 Books Where the Earth Comes Alive

Today is a day specifically set aside to celebrate and support environmental protection efforts. Really, this should be every day. Climate change is real. Please read Greta Thunberg’s twitter.

There is certainly no shortage of books on the subject. You might be interested in the great resource that is 365 books to jump start your climate change library over on Lit Hub, broken into four helpful sections: the classics, the science, fiction and poetry, and big ideas. As climate change becomes a bigger threat, climate fiction becomes a bigger genre. If you want to read a particularly timely work of climate change fiction, might I direct you to this list of 10 cli-fi novels for the dark days ahead?

Note that none of the titles gathered here specifically tackle the threats facing our planet (for that, please read the science). Rather this is a list of books in which the natural world becomes a character. These are books that make the Earth feel alive. Happy Earth Day, everyone. 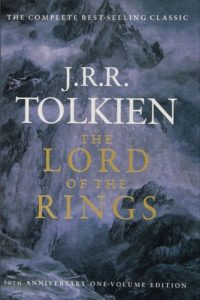 The Lord of the Rings by J.R.R. Tolkien
(Mariner)

Talking trees appear in folklore around the world. They also exist in J.R.R. Tolkien’s Middle-earth in the form of the Ents, an ancient race of beings who are allies to nature and shepherds of the forest. In Tolkien’s world, the beings whose role is to protect the earth grow to resemble it, a way that nature lays claim. The most prominently featured of the Ents is Treebeard, the oldest living creature. From him, we learn of Entish, the ancient language of the trees. (Funny how for things to feel truly alive to us, speech is required.) It sounds like a woodwind instrument and is amazingly indirect. There may not be words for yes and no. Everything takes an eternity to say in Entish. It is a reminder of the patience and fortitude of the earth.

A woman sits on the ground, leaning against a pine. Its bark presses hard against her back, as hard as life. Its needles scent the air and a force hums in the heart of the wood. Her ears tune down to the lowest frequencies. The tree is saying things, in words before words.

The trees are very much alive in this novel from the National Book Award and Pulitzer Prize-winner Richard Powers. They can communicate with humans. The novel follows nine individuals on their quest to save acres of untouched forest. Throughout, Richard Powers fuses fun facts with beautiful language. As Barbara Kingsolver wrote in the New York Times Book Review: “we gain glimpses of a vast, primordial sensibility, while watching our own kind get whittled down to size … The descriptions of this deeply animate place, including a thunderstorm as experienced from 300 feet up, stand with any prose I’ve ever read.” The Overstory is necessary nudge of perspective and a celebratory ode to the trees.

Deep Dive: Richard Powers on writing about the nonhuman world. 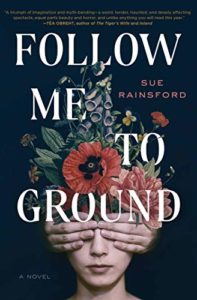 The Ground is moving. For the first time in all these long, pale years. It’s moving. It’s finished; done.

Sue Rainsford’s debut novel tells the story of Ada and her father, creatures born from a mystical patch of earth called The Ground. They live peacefully at the edge of a town whose residents seek their healing powers. For particularly difficult cases, the patient is buried temporarily in the bit of The Ground in their yard that they have trained to do their bidding. But beyond that tamed earth lays a more sinister power.

His body is a suit of bark-armour with the initials of long-dead teenage lovers carved in the surface.

Max Porter is a master at calling upon the natural world and making it feel intimate. (In his first work, Grief Is the Thing with Feathers, a crow visits a grieving family whose mother has just died.) In his second novel, we meet Lanny, a precocious young boy who sometimes does strange things, like wander out into the yard in the middle of the night to listen at the base of a tree to the girl he swears lives under it. It’s this kind of whimsical what-if that makes the world awaken in Lanny. The story is told in shifting perspectives; one of the narrators is Peter, a local artist who has taken Lanny under his wing. He teaches him to really look at his surroundings. (He once describes their town: “If you looked at the village from above and it was a man, then his hair would be Hatchett Wood. We’d be siting on top of his brain.”) One of the other narrators is Dead Papa Toothwort, a mystical tree-like creature born of local legend who slinks out of the forest and feeds on human language. He’s paying particularly close attention to Lanny. 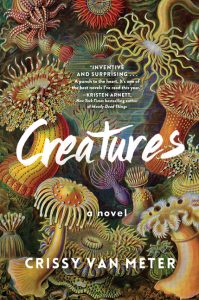 The thing about bays: It’s easy to get trapped in the swooping curve of their bellies, and there are only small mouths to let everything out. All exits must be planned with care.

Crissy Van Meter’s debut novel begins with a beached whale. It’s dead, and its rotting stench is palpable across the island where our protagonist is supposed to be getting married the following day. In this book, the island teems with life. The ocean has agency. The land has a power over people: it sucks them in, it claims their loyalty. The book is broken into sections named after the natural world: Tsunami, Fog, Earthquake. The weather, like the people who drift in and out of our lives, is merciless. There’s a beautiful bit that compares the decomposition of a dead whale to the unspooling of a relationship. 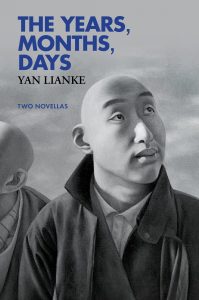 The seedling had nearly been blown over by the wind, and was now trembling like a broken finger.

In Yan Lianke’s The Years, Months, Days, an elderly man and his blind dog become the sole inhabitants of a village whose other residents were forced to flee because of a terrible drought. The Elder, knowing he wouldn’t survive the journey through the mountains, stays behind and makes it his mission to coax a corn seedling into growing. It’s a touching tale of one man’s dedication to the harvest. Day after day, The Elder lives on rat meat and has only the dog to speak to. They are so obsessed with the survival of the corn stalk that it becomes a third character of sorts, one whose existence becomes more important than their own.

African proverb: Roots do not know what a leaf has in mind. / Everytime the tree works the leaves dream.

Poet C.D. Wright’s final book is a love letter to the beech tree. (Only the lovely C.D. Wright would set herself the task of intimately getting to know the beech tree!) It is the result of years of deeply devoted research, conversations with arborists, explorations of folklore. Casting Deep Shade is a testament to the power of language to preserve. 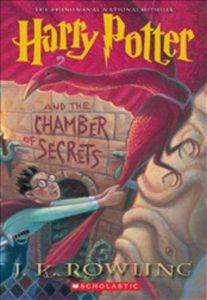 Harry Potter and the Chamber of Secrets by J.K. Rowling
(Scholastic)

I noticed, in my search of the park, that considerable damage seems to have been done to a very valuable Whomping Willow.

Yes, Hogwarts is shrouded in all kinds of magic, but one of the most enchanting bits is the Whomping Willow, a tree whose purpose is to keep trespassers away. (You may recall the fantastic scene in which Harry and Ron drive a car straight into it.) In this specific case, the Whomping Willow is hiding a secret entryway. It’s yet another example of the way that trees are often evoked as great protectors. 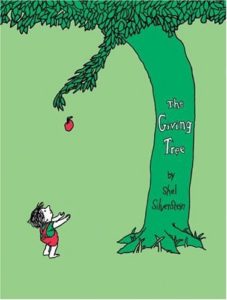 Once there was a tree … and she loved a little boy.

What Earth Day list would be complete without a shoutout to Shel Silverstein’s classic, The Giving Tree? Maybe when you were a kid, you read this as a touching and reassuring tale about how someone will always be there to take care of you. But, you know, as deforestation increases and we continue to mine for natural resources at a devastatingly unsustainable rate, it’s also a very timely allegory for the way we take advantage of the Earth’s generosity.

Ahead of me in the water was the black mouth of a tunnel entrance, leading away into the rock, more than wide enough to engulf me, its stone edges smooth.

In Underland, acclaimed nature writer Robert Macfarlane pulls you under the earth’s surface to explore the unseen realms of underground fungal networks, ancient burial chambers, deep water cave-diving, and much more. Terry Tempest Williams put it best, writing in The New York Times, “You know a book has entered your bloodstream when the ground beneath your feet, once viewed as bedrock, suddenly becomes a roof to unknown worlds below.” 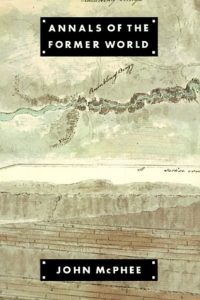 Annals of the Former World by John McPhee
(FSG)

The poles of the earth have wandered. The equator has apparently moved.

Welcome to the fortieth parallel, a line forty degrees north of the Earth’s equatorial plane. John McPhee uses it as his guide across America. (For references, it touches: California, Nevada, Utah, Colorado, Nebraska, Kansas, Missouri, Illinois, Indiana, Ohio, West Virginia, Pennsylvania, and New Jersey.) In this Pulitzer Prize-winning exploration of geology and the people who dedicate their lives to studying it, John McPhee provides a beautiful snapshot of our shifting earth.

A froth of dark, roiling clouds churns above the swaying canopy. The rain begins, but as a gentle caress.

John Zada is looking for Bigfoot, but what he finds instead is a memorable cast of characters—each with their own unique relationship to the myth—and the beauty of the place the mysterious creature allegedly inhabits. In the Valleys of the Noble Beyond takes you through the Great Bear Rainforest, home to ancient cedar trees and humpback whales and white Spirit bears. John Zada writes of the place with care and genuine awe. The search for Sasquatch becomes a humbling look at the ecosystem shrouding it.

How to Do Nothing by Jenny Odell
(Melville House)

I’ve always found it funny that it’s called bird-watching, because half if not more of bird-watching is actually bird-listening.

Artist Jenny Odell’s How to Do Nothing is perhaps the perfect book to pick up right now. She frames your attention as your most valuable resource. She helps you redefine productivity and critiques capitalist work structures. And then, she asks you to think of yourself not as a citizen of a state but as a member of your biome. For Jenny Odell, an avid bird watcher, the world comes alive when she spends her time learning about migration patterns and symbiotic relationships, when she actually turns her attention to the world around her. She compares it to learning a new language; everything opens up.