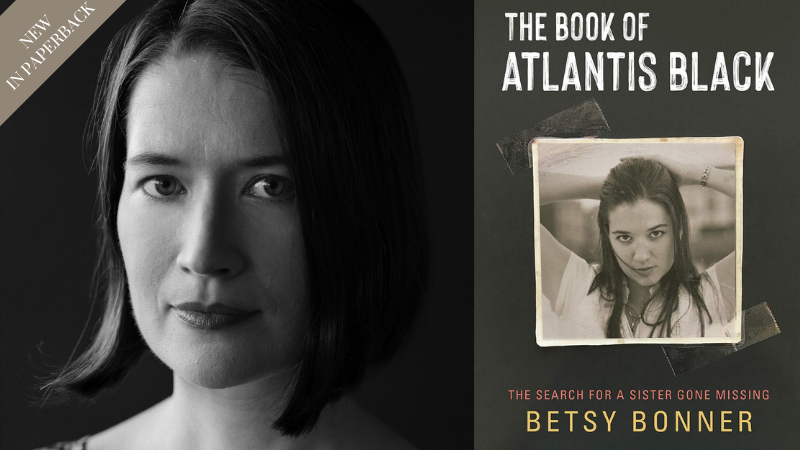 This week, we spoke to the author of The Book of Atlantis Black (out this week in paperback), Betsy Bonner.

Betsy Bonner: As a child: A Wrinkle in Time.

As a teenager: Frankenstein and Jane Eyre.

BB: My mother’s copies of Wuthering Heights and Tess of the D’Urbervilles—both were cheap 1960s paperbacks, with lots of underlines by Mom, and her occasional marginalia. Rebecca by Daphne Du Maurier—I have a hardcover that belonged to my grandmother. To the Lighthouse.

BB: The Red Parts by Maggie Nelson. Blood Will Out by Walter Kirn. Round Lake, my first poetry collection?

BB: The Cost of Living by Deborah Levy.

In the Dream House by Carmen Maria Machado.

BB: The past year two years have felt a bit like one, because of the pandemic. Rebecca Solnit’s Recollections of My Nonexistence—the essay titled “Life During Wartime” is extraordinary. Tove Ditlevsen’s The Copenhagen Trilogy was published in the sixties and seventies in Denmark, and collected for a new edition in English in this country last year. The third part, “Dependency,” made my hair stand on end. Also, it may have won the Pulitzer, but why not continue to give a shout-out to Natalie Diaz’s poetry collection Postcolonial Love Poem? Jenny Offill’s Weather, since she predicted the future.

BB: Mary Robison’s Why Did I Ever—it also made me cry.

BB: Bluets. Does everybody say that?

BB: The Islands, by the Irish writer William Wall. I was lucky enough to meet him when he was in the United States on a book tour. Also: I recently gave Ottessa Moshfegh’s My Year of Rest and Relaxation to a friend who needed it.

For kids: The Wizard Children of Finn or The Wolves of Willoughby Chase.

BB: I don’t hate books, but I despise anything misogynistic or cruel to animals.

BB: Northanger Abbey! Insane that I haven’t yet read it, given my interest in the gothic and in Austen. I’m saving it. I’ve read all of her other novels—Emma multiple times.

BB: There are several in Mary Gaitskill’s story collection Because They Wanted To.

BB: I think that people have heard about My Sister Life by Maria Flook—set around Wilmington, Del., where I went to Catholic school—but I only heard about it recently, when Amy Hempel mentioned it in relation to my memoir.

BB: My good friend Chloe Honum’s poetry collection The Tulip-Flame is one. I first read her poems in 2009, when we were both in a workshop led by Henri Cole. Our writing shares some of the same themes—her mother, like mine, committed suicide. It was inspiring to watch her poems grow into her first published book—something I’d been hoping for myself. (Her new collection, The Lantern Room, will be published next year.)

BB: The Handmaid’s Tale by Margaret Atwood. (I’d already read it, since my mom had a paperback of it in our house.) It now seems surprising that my English teacher included it on our syllabus, in my public high school, in the mid-nineties.

BB: Rebecca Donner’s All the Frequent Troubles of Our Days. She’s visiting my class of memoir-writing students next week at the 92Y Unterberg Poetry Center.

BB: Tuck Everlasting by Natalie Babbitt. I didn’t read it until my late twenties, after I’d become a teacher. I remember going to a talk by Babbitt, who said that the inspiration for the Tuck family’s house—a magical cottage in the woods—had been struck by lightning and burned to the ground when she went looking for it.

BB: The Islands, because it’s so damn beautiful. I want to see those Irish landscapes. Memorial Drive, which begins with a striking image of Trethewey’s mother.

Betsy Bonner is the author of the memoir The Book of Atlantis Black: The Search for a Sister Gone Missing and the poetry collection Round Lake. She is a former Director of the 92Y Unterberg Poetry Center, where she now teaches creative writing. She is a fellow of the MacDowell Colony and the T. S. Eliot House. She grew up in Chadds Ford, Pennsylvania, and lives in southwestern Vermont. 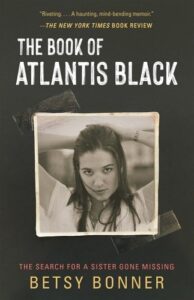