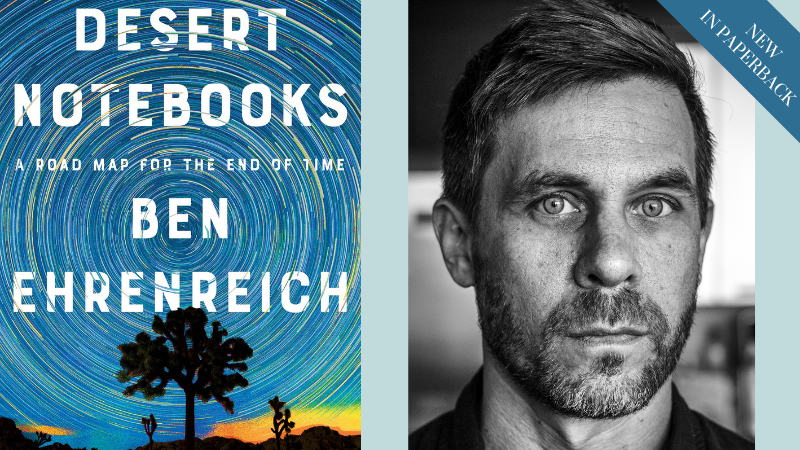 Rapid-fire book recs from the author of Desert Notebooks

This week, we spoke to the author of Desert Notebooks (out now in paperback), Ben Ehrenreich.

Ben Ehrenreich: My sister and I loved the Tintin and Asterix books so much that we stole every copy that our local public library had. (Sorry…) Looking back, Tintin’s politics (or Hergé’s anyway) are absolutely abysmal, but the Asterix books imparted important lessons about standing up to imperial violence, and hold up a little better.

BE: Moby-Dick. I’m not religious about it and I don’t always make it all the way through, but I can’t resist picking it up again about once a decade. It never disappoints.

BE: There are a couple of essays in John Berger’s Hold Everything Dear that I kept coming back to while I was writing Desert Notebooks—just to remind myself of what I was after and what writing is capable of. Only one quote from Berger survived the final edit, but his presence is very much floating over the words that did make it through.

BE: Doris Lessing’s Re: Colonised Planet 5, Shikasta. I don’t know how I managed to pass entire decades without knowing that Lessing wrote a series of five experimental sci-fi novels. The first volume is the best of them—sprawling, brilliant, bizarre, profound. Also: Vladimir Sorokin’s Ice Trilogy and Bolaño’s 2666.

BE: Janet Abu-Lughod’s Before European Hegemony, which is more exciting than the title suggests. The last novel was Kim Stanley Robinson’s The Years of Rice and Salt, which I highly recommend.

BE: How about six books? Sesshu Foster and Arturo Romo’s ELADATL: A History of the East Los Angeles Dirigible Air TransportLines is strange and bold and absolutely wonderful; Roberto Lovato’s Unforgetting is an important, raw, gorgeous book; Carribean Fragoza’s story collection, Eat the Mouth That Feeds You, is stunning, dreamy, dark, and almost perfect; Todd Miller’s Build Bridges, Not Walls is a book of radical optimism of exactly the kind we’ll need to survive our current predicament; Rob Wallace’s Dead Epidemiologists has made more sense of the Covid pandemic than anything I’ve read anywhere; Adania Shibli’s novella Minor Detail was devastating in all the right ways.

BE: Most recently, Anna Burns’ Milkman. It’s a heavy one, set in Northern Ireland and diving into all manner of ugliness and violence, but the prose is so deft that it also manages to be hilarious. Also Paul Beatty’s The Sellout.

BE: The one I just wrote. Desert Notebooks is in many ways an attempt to answer the questions that began to plague me as a seriously nerdy adolescent: What is time? What are we doing here? How can we possibly make it through this mess?

BE: Bruno Schulz’s The Street of Crocodiles—gorgeous, fantastical stories about the extraordinary wonders that pulse beneath the drab surface of the real.

BE: Du Bois’s Black Reconstruction in America has been burning a hole through my tablet for longer than I want to admit. Also, if I am granted an extra life: Don Quixote, unabridged and in Spanish.

BE: While researching Desert Notebooks I stumbled across Louis Auguste Blanqui’s Eternity by the Stars. To the extent that Blanqui is remembered at all he’s remembered as a fierce and uncompromising revolutionary, but during one of many prison stints he wrote this bizarre and beautiful philosophical treatise making the case—decades before modern physicists would—for the existence of infinite worlds.

BE: Time to read is scarce these days, soI’ve been dipping in and out of these for months, but nonetheless: Eric Williams, Capitalism and Slavery; Eduardo Kohn, How Forests Think; Anna Lowenhaupt Tsing, The Mushroom at the End of the World; and Braudel’s gigantic book on the Mediterranean, which I foolishly started reading on my phone on the subway and will likely be reading forever.

BE: I’ll leave that to my daughter, who is 17-months old and whose current favorite is Little Fur Family, by Margaret Wise Brown (of Goodnight Moon and The Runaway Bunny fame). She likes the song at the end, which I’ve sung a few hundred times. I like it too.

Ben Ehrenreich is a journalist, essayist, and novelist. He has reported from more than a dozen countries on four continents. His work has appeared in The Nation, The New York Times Magazine, the London Review of Books, and Los Angeles Magazine, and in 2011 was awarded a National Magazine Award. His most recent book, Desert Notebooks, was a New York Times Notable Book and one of NPR’s best books of the year. His book The Way to the Spring: Life and Death in Palestine, based on his reporting from the West Bank, was one of The Guardian’s Best Books of 2016. He is also the author of two novels, Ether and The Suitors. 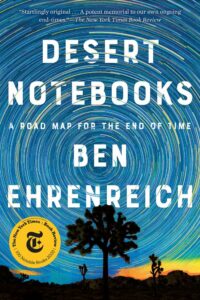