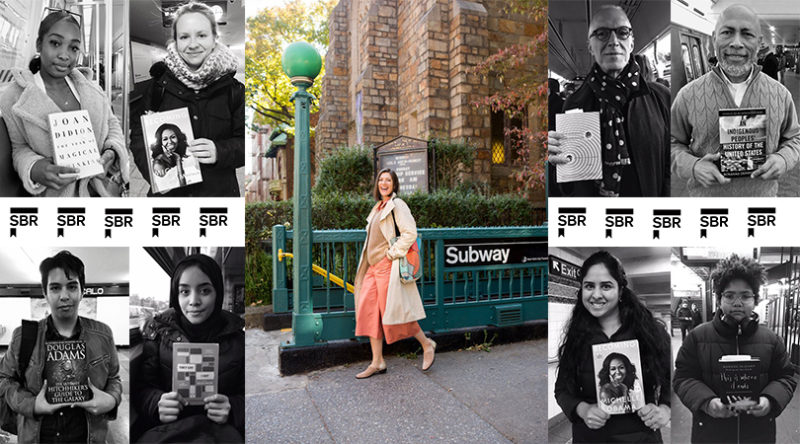 Behind the Subway Book Review: An Interview with Uli Beutter Cohen

If you have the unique joy/misfortune of riding public transportation every day, this scenario will be familiar to you: You look up from your book—or Candy Crush, or your seventeenth rewatching of The Office, or whatever you’re doing—and the cover of someone else’s book catches your eye. Maybe it’s a book you’ve read before, and you’re wondering if the stranger’s gotten to your favorite part yet. Or maybe it’s a book you’ve been meaning to read, and you sort of want to ask how they’re liking it.

Well, Uli Beutter Cohen bridged that gap. In December 2013, she started Subway Book Review, a wildly popular Instagram account for which she interviews strangers about the books that are keeping them company on their commute. Since then, she’s talked to hundreds of people, gathered as many book recommendations, expanded the project to collect stories in multiple metropolises, and even caught Emma Roberts reading Joan Didion at the Broadway-Lafayette station.

We talked to Uli Beutter Cohen about her viral social media project.

Book Marks: How did Subway Book Review begin? What were your goals going into this project, and how have they changed in the 5+ years you’ve been doing this?

Uli Beutter Cohen: When I moved to New York City, I fell in love with the subway (as soon as I got over my small town fear of riding it, that is). On my first few subway rides, I had this sinking feeling that I was walking into the personification of “the great unknown,” because at any time a train could alter its route, just stop running, or change directions unannounced. There was no wifi underground so if something went wrong, you literally had to ride it out. But the more time I spent underground, the more I came to love the fact that it’s where the city famous for redefining the length of a minute has to stand still. I could finally see all the amazing people who make this place what it is, and I also saw their books. New York has such a literary pride and has always been a destination for dreamers and people with grand imaginations. I wanted to connect with them and hear about how they’re living. So I broke the unspoken law of the subway and started talking to the people I was curious about. As I was having spontaneous conversations with all kinds of strangers, I realized that a book is an amazing way to get to know someone instantly because what they’re reading is a perfect reflection of what they’re thinking about at a specific moment in time. I will never forget Nicole, who was reading When Breath Becomes Air as her brother struggled with his own terminal illness, or Oliver, who was reading Black Like Me and talked to me about the race war in the United States. There also wasn’t any platform that visualized what today’s readers look like and I definitely felt that was a very necessary thing. Five years into it, Subway Book Review’s mission has turned into a larger investigation of where we, as a society, are going—figuratively and literally speaking. SBR now has contributors in nine cities, including London, Berlin, and Mexico City, and it’s growing. My goal is to continue to create this unexpected, one-of-a-kind family portrait of people who believe in the power of stories.

BM: What’s your favorite book that was introduced to you by a fellow commuter?

UBC: Oh, there are so many! No One Tells You This by Glynnis MacNicol, Americanah by Chimamanda Ngozi Adichie, and The Vegetarian by Han Kang, for example. SBR has also served as a great reminder to pick up a book by a classic writer, like James Baldwin, or to discover a new voice, like Tommy Orange (who wrote There There, which is required reading), or to venture outside your comfort zone, which might mean reading something like The Magic of Reality by Richard Dawkins. It’s okay not to retain every single truth someone presents you with, but I believe that it’s better to have touched it than to never have encountered that truth at all.

BM: What’s the book that you wish someone would ask you about on public transit?

UBC: Tell Me How It Ends by Valeria Luiselli. It’s about the US-Mexico border, the children who need to cross it, and what happens to them. Valeria Luiselli finds a really stunning way to look at the American Dream and shares a perspective that’s relatable to all of us who are seeking that dream. My grandfather was a refugee from Transylvania during World War II and was eventually settled in Germany. I then left my family in Germany and migrated to the United States, willingly, because I wanted to find my dream here. I’ve been traveling to Mexico over the last few years because I want to learn more about the country. On my last trip, earlier this month, I saw the monarch butterfly migration in Cerro Pelon. It was a spectacular sight and gave me a lot to think about. It’s good to remember that migration is a right shared by all living beings. Borders, state lines, and zoning are an invention that only serves a few who are thirsty for power. The right to move freely belongs to all of us.

BM: Since Subway Book Review has expanded its reach to many different countries, have you noticed any interesting patterns? What’s different (or the same) about the way people talk about books in these different places?

UBC: I can tell you that Michelle Obama reigns supreme at the moment. Her book Becoming is everywhere, from New York to Berlin. I think it’s because the Obamas stand for values and a kind of leadership that’s universally loved and missed by so many. A pattern I’ve noticed is that people tend read more on Wednesdays and Thursdays. Probably because midweek is a good time to escape into another world.

BM: What’s the most surprising story you’ve gotten out of talking to a stranger for Subway Book Review?

UBC: One of my favorite moments happened last September. I stopped a man named Tony Fischetti, what a great name, at 42nd Street—Bryant Park Station. He was reading Kelly Oxford and was on his way to the New York Public Library, where he works and analyzes patterns of circulation. I asked him if he knew what the most checked out book of 2017 was. He emailed me later that morning to say that it was Between The World And Me by Ta-Nehisi Coates. I was doing an interview that afternoon with a reporter who followed me underground. It was a busy day and we jumped from train to train and talked to a lot of different people. Eventually her recorder ran out of batteries and she decided to split. I needed to get on the 6 train, and lo and behold, the doors of the subway opened and there was Ta-Nehisi Coates reading Ill Fares the Land by Tony Judt. I was so excited that I walked right up to Mr. Coates and said without introducing myself: “I have great news! Do you know what the most checked out book of 2017 was?” He was pretty stunned by my ambush but went along with it. He was super humble about his being the most checked out book and just said he is always happy to hear that people are reading. We also did a book review and I took lots of photos and selfies. He’s very tall and I was very excited. Those selfies are nothing to write home about, but it was a great New York moment.

BM: What book have you seen most frequently on your subway scouting?

UBC: It changes with the times. In 2017, I saw a lot of memoirs written by women, and a lot more sci-fi and dystopian books also popped up. In 2018, I saw books about identity, race, and also a lot of classics. And each year there’s a Harry Potter wave that sweeps the subway—that one is as certain as the B train not running on a Sunday.

BM: How has social media changed the conversation around books?

UBC: Thanks to social media and projects like Subway Book Review or Well-Read Black Girl, we can finally see what today’s readers look like and which stories people actually want to read. Before social media there was often a singular, all-powerful “expert” who determined which stories would rise to the top and land in our hands. Giving the audience power, and that’s what social media does, changes everything. I think because of that, there’s finally a realization that more diverse stories need to be mass-published. I’m so here for that and for bursting the bubble.

BM: What book(s) are you reading at the moment?

BM: You recently launched @subwaybookreviewkids. What inspired this branch off? What can we learn from the way children talk about books?

UBC: Kids are amazing because they want nothing more than to honestly share what’s on their mind. They’re the next generation, our future leaders, and they’re inheriting our legacy with all its terrible flaws and fantastic glories. I want to know what they think of it—don’t you? All we have to do is ask them what they are reading. Or you can follow @subwaybookreviewkids, where I do the asking.