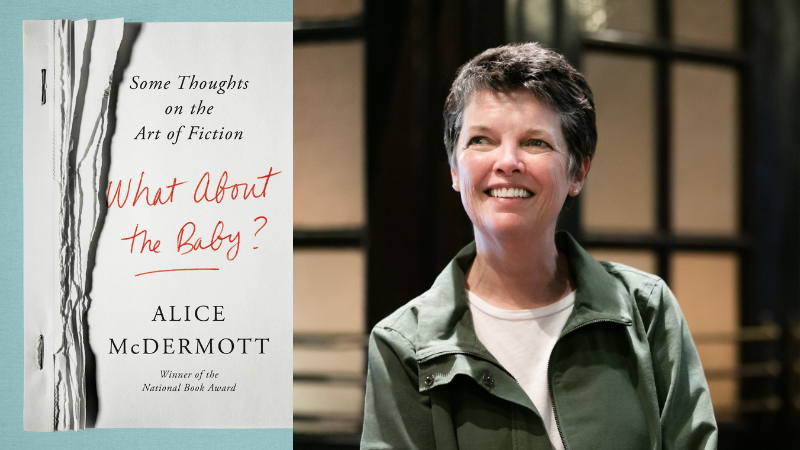 Rapid-fire book recs from the author of What About the Baby?

This week, we spoke to the author of What About the Baby?, Alice McDermott.

AMD: The Sorrows of Satan by Maria Corelli. From 1895. A penniless writer’s Faustian bargain. A hoot.

AMD: Hamnet. A mother sewing her child’s shroud. How can you not cry? (I also tear up every time I see the grey-muzzled Golden Retriever on the cover of a book called, I’ll See You in Heaven, but I haven’t read it.)

AMD: Lolita. But only if I could then be in conversation with my teenage self.

AMD: Don’t have a favorite since it’s more fun to fit the book to the recipient rather than to drop the same book on everyone. Poetry is helpful here. People never expect it. Seamus Heaney’s 100 Poems is great for the poetry-wary. Rita Dove’s recent Playlist for the Apocalypse would be a beautiful gift for the less poetry adverse. I’ve just discovered the work of Major Jackson. I’d give his Hoops to a young writer/artist/musician. Eavan Boland, Paula Meehan, Mary Jo Salter, all poets whose books I’ve found well suited to certain friends and students. Collected poems are also good gifts: Yeats, Auden, Dickinson, Edna St. Vincent Millay, Adrienne Rich, Elizabeth Bishop, Derek Mahon for more Irish brilliance.

AMD: Seems only fair to wait until the 22nd century before making such a choice.

AMD: A Farewell to Arms.

AMD: Dostoevsky’s Demons, which will probably take me into winter. Also The Wanting Life, a 2020 first novel by Mark Rader. And making my through the three Theban plays of Sophocles, a good exercise now and then.

AMD: Matilda by Roald Dahl. Maybe also Dahl’s The Vicar of Nibbleswicke because of the happy memory I have of my own children absolutely delirious with laughter over the silliness of it all. And When It Snowed That Night by Norma Farber. (Which is a book I love to give as a gift as well, except it’s out of print.) And Charlotte’s Web. Lovely Charlotte’s Web.

AMD: None. I don’t want anyone messing with my favorite books. I like them to be books. Just books. In silent conversation with themselves. And with me.

Alice McDermott is the author of several novels, including What About the Baby?, The Ninth Hour; Someone; After This; Child of My Heart; Charming Billy, winner of the 1998 National Book Award; and At Weddings and Wakes—all published by FSG. That Night, At Weddings and Wakes, and After This were all finalists for the Pulitzer Prize. Her stories and essays have appeared in The New York Times, The Washington Post, The New Yorker, Harper’s Magazine, and elsewhere. For more than two decades she was the Richard A. Macksey Professor of the Humanities at Johns Hopkins University and a member of the faculty at the Sewanee Writers Conference. McDermott lives with her family outside Washington, D.C.

Alice McDermott’s What About the Baby? is out now from