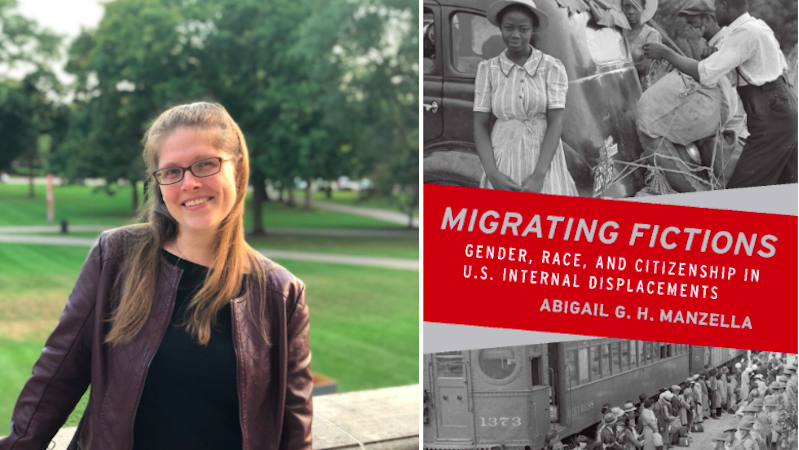 This week we spoke to Missouri-based writer and critic Abby Manzella.

Abby Manzella: The Marrow of Tradition by Charles Chesnutt comes to mind because there would have been an added intensity in getting to read it in its moment. It was a timely, risk-taking book in 1901 as this novel, though fictionalized, laid bare the horrors of a white supremacist coup from only three years earlier in Wilmington, North Carolina where African Americans were disenfranchised, killed, or run out of town. The novel is also a literary gem. Lucy Gayheart also occurs to me because, while it was written by the canonical author Willa Cather, it is a less commonly read novel by her that engages with gendered power dynamics and music—two of my other major interests.

AM: Although this book earned strong reviews, I wish it had received even more recognition.The Gone Dead is a fantastic book because Chanelle Benz does a breathtaking job of writing an entertaining novel that works as a real page turner while also delving into the U.S.’s enduring racism. I also want to give a shout out to a slightly older nonfiction work by Elena Passarello called Animals Strike Curious Poses that was published by Sarabande in 2017. I jump up and down about it whenever I get the chance. It is a collection of essays that explores not only some compelling research about the animals in history that we’ve named but also shapes the distinctive form of each chapter with the care of a potter. It definitely requires an actively engaged reader because of the shifts of styles throughout, but I enjoy the trust she puts in her readers, and I can feel how her hands had to get dirty to craft such artistic pieces.

AM: I think a major misconception is the general notion that criticism is only about spouting your opinion. Of course, I’m being asked to present my feelings on a work, but any conclusion I draw is bound up in a great deal of outside research such as thinking about the author’s own canon as well as other similar books. How does this work fit within the larger context of other literature and the world into which it is being launched? I use my skills from being trained as a professor as well as my skills as a creative writer, not just my love as a reader—but that does remain intact.

AM: I appreciate that many of my reviews are readily available at the click of a button, but I bemoan the overall decline of reviewing opportunities in newspapers, with many regional newspapers merely republishing the reviews from one or two places instead of continuing to allow differing opinions in a variety of locations to thrive. If I had a home base at a single publication, I’d welcome the chance to develop an ongoing relationship with readers.

AM: I enjoy commentary about books as well as TV, movies, and theatre. Anthony Lane and Emily Nussbaum, for instance, often catch my attention (and Nussbaum’s I Like to Watch is another worthy book from this year). As an avid podcast listener, I am devoted to listening to Pop Culture Happy Hour that delves into various kinds of culture. Additionally, I like to read reviews and interviews by literary writers like Kathleen Rooney or Crystal Hana Kim because I see the care of the writer in their comments. Often, though, I relish reading critics with whom I don’t agree because then I have to think through the details of my opposition.

Abby Manzella is a book reviewer who also writes film and cultural criticism alongside creative nonfiction. Her book Migrating Fictions: Gender, Race, and Citizenship in U.S. Internal Displacements was named a Choice Reviews Outstanding Academic Title. You may read some of her reviews now and forthcoming from the Boston Globe, Minneapolis Star Tribune, Pittsburgh Post-Gazette, St. Louis Post-Dispatch, Women’s Review of Books, The Millions, and Kenyon Review, among others. Follow her on Twitter @AbbyManzella, on Facebook at @AbbyManzellaAuthor, or check out her website https://abbymanzella.weebly.com/.