"A voice that is profane, lyrical, learned and tireless" 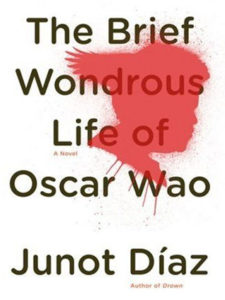 “In The Brief Wondrous Life of Oscar Wao, Díaz, the author of a book of sexy, diamond-sharp stories called Drown, shows impressive high-low dexterity, flashing his geek credentials, his street wisdom and his literary learning with equal panache.

“Díaz’s novel also has a wild, capacious spirit, making it feel much larger than it is. Within its relatively compact span, The Brief Wondrous Life of Oscar Wao contains an unruly multitude of styles and genres. The tale of Oscar’s coming-of-age is in some ways the book’s thinnest layer, a young-adult melodrama draped over a multigenerational immigrant family chronicle that dabbles in tropical magic realism, punk-rock feminism, hip-hop machismo, post-postmodern pyrotechnics and enough polymorphous multiculturalism to fill up an Introduction to Cultural Studies syllabus. Holding all this together — just barely, but in the end effectively — is a voice that is profane, lyrical, learned and tireless, a riot of accents and idioms coexisting within a single personality.

“‘To say I’d never in my life met a Dominican like him would be to put it mildly,’ Yunior explains, and in creating Oscar, Díaz has used one stereotype to subvert another. Not all Dominican men are macho peacocks, and not all sci-fi, anime and Dungeons & Dragons fanatics are white boys. That this may be an obvious point doesn’t diminish the skill and flair with which Díaz brings it home.

“Trujillo proves to be a great boon for Díaz, who washes the cities and villages of his country in the 1940s and ’50s in a period ambience that’s violent as well as sensual and exotic. The island may be cursed and haunted, but it’s also enchanted; even the bitterest memories seem softened by nostalgia. The evil spirits that are periodically invoked to explain Oscar’s family’s bad luck are also, for the novelist if not for his characters, lucky charms.

“Without the horrors and superstitions of the old country, without the tropical sweetness that inflects Díaz’s prose even at moments of great cruelty, Oscar Wao would be just another geek with an Akira poster on his dorm-room wall and a long string of desperate, unconsummated sexual obsessions. The incongruity between Oscar’s circumstances and his background — a disjunction Díaz solves violently and unconvincingly in the book’s final section — is the real subject of The Brief Wondrous Life of Oscar Wao. This is, almost in spite of itself, a novel of assimilation, a fractured chronicle of the ambivalent, inexorable movement of the children of immigrants toward the American middle class, where the terrible, incredible stories of what parents and grandparents endured in the old country have become a genre in their own right.”