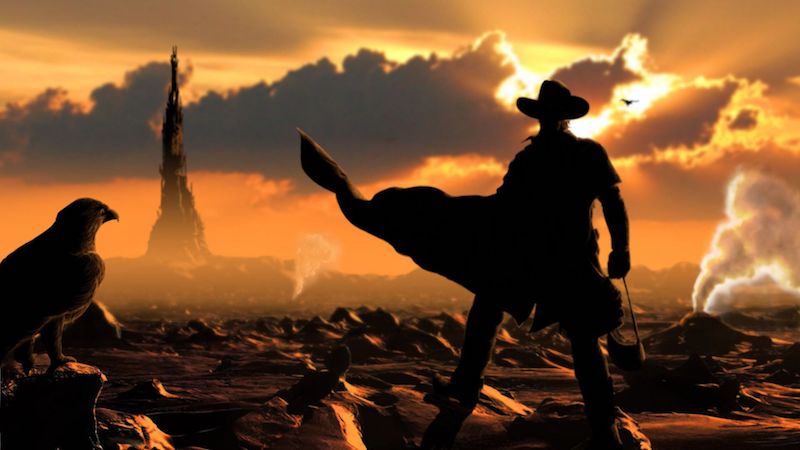 A Uniquely American Epic: On Stephen King's The Dark Tower

A look back on King's multi-volume fantasy western series 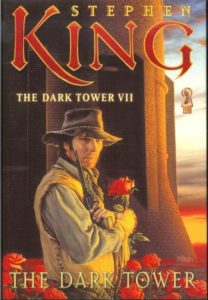 Death, but not for you, gunslinger. Never for you. You darkle. You tinct. May I be brutally frank? You go on.

“The seventh and final volume, The Dark Tower, should more than satisfy his voracious readers. It is an absorbing, constantly surprising novel filled with true narrative magic, a fitting capstone to a uniquely American epic.

“That journey [began] with the memorable opening sentence: ‘The man in black fled across the desert and the gunslinger followed.’ Roland, a lineal descendant of King Arthur, is the last gunslinger in a rapidly decaying world. He has embarked on a quest for the eponymous tower, which stands at the nexus of all times and places, binding together an infinite number of parallel worlds. The tower, held in place by a number of intersecting ‘beams,’ is under attack by a psychotic entity known as the Crimson King, who plans to tear it down and rule forever in the chaos that will follow. Roland’s twin goals are to preserve the tower — and, by extension, the worlds it supports — and to climb to the room at the top of that tower, where an unknown fate awaits him.

“King combines these diverse elements into an archetypal quest fantasy distinguished by its uniquely Western flavor, its emotional complexity and its sheer imaginative reach. In the course of nearly 4,000 pages, the Dark Tower saga fuses slightly skewed autobiography with an extravagant portrait of an imperiled multiverse. The series as a whole — and this final volume in particular — is filled with brilliantly rendered set pieces (including a stand-up comedy routine that turns unexpectedly lethal), cataclysmic encounters and moments of desolating tragedy. In the end, King holds it all together through sheer narrative muscle and his absolute commitment to his slowly unfolding — and deeply personal — vision.

“Although King’s detractors — a vocal, often contentious bunch — will doubtless disagree, The Dark Tower stands as an imposing example of pure storytelling. King has always believed in the primal importance of story, and his entire career — encompassing 40 novels and literally hundreds of shorter works — is a reflection of that belief. On one level, the series as a whole is actually about stories, about the power of narrative to shape and color our individual lives. It is also, beneath its baroque, extravagant surface, about the things that make us human: love, loss, grief, honor, courage and hope. On a deeper level still, it is a meditation on the redemptive possibility of second chances, a subject King knows intimately. In bringing this massive project to conclusion, King has kept faith with his readers and made the best possible use of his own second chance. The Dark Tower is a humane, visionary epic and a true magnum opus. It will be around for a very long time.” 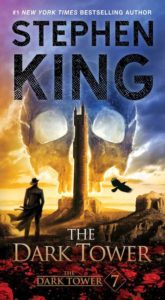 “So now, with the Dark Tower books stacked before us, the question can be answered: would anyone read these things if they weren’t by Stephen King? It’s not an idle question. King has built the series into a monument to his ambition. He has folded in characters from his non-Dark Tower novels, turning this into an über-narrative that, he suggests, is the keystone to his other work. To emphasize this point, the back of each volume shows a picture of King as a young man (perched over a typewriter, naturally) juxtaposed with one of him now. The message: faithful fans must make the journey to the tower if they wish to comprehend the master.

Should you decide to do this, be prepared: it won’t exactly be the year of reading Proust. The Dark Tower series is not the longest popular novel ever written, but it’s easily the one with the highest body count.

“It’s easy to understand why these books have generally been among King’s most neglected. At times, the series feels like a dumping ground for his wackier notions (a talking monorail that likes riddles) and for the further explication of ideas from his previous books (the superflu from The Stand) … That’s not to say there is nothing to enjoy about The Dark Tower. For starters, there is the sheer absurdity of its existence. You’re left astonished at the devotion of the readers who will follow King down his labyrinthine pathways of plot, through the thickets of ALL CAPS paragraphs, only to emerge from a story within a flashback. As a writer, King is willing to describe anything, no matter how hackneyed or strange the scenario. (The high point might be when Susannah, already plagued by two personalities, is invaded by a third personality, who somehow becomes pregnant.) More fascinating, perhaps, is King’s inexhaustible supply of similes and metaphors, which he seems to write without a backward glance.

“As for Roland and his ka-tet, they continue their reality-bending trip in this new book, but it’s harder to care about them. You can see the puppet strings, and the suspense sinks to the level of a B horror film: which character is going to get killed first? The fictional King also returns, and we learn how this series was the one story he had no control over, the one he could write only when the voices in his head were speaking to him. In the end, King doesn’t have the writerly finesse for these sorts of games, and the voices let him down. The ultimate battle borrows a device from the Harry Potter books, and at the foot of the Dark Tower the voices throw up their hands: ‘Some moments are beyond imagination.’ That’s the sound of a writer shouting ‘mercy.’ King has talked about retiring after the publication of this book. But that seems unlikely: he’s unburdened himself of his sprawling fantasy, and he’s free to write something new. If we’ve learned anything about King by the close of this series, it’s that he’s terrified of endings.” 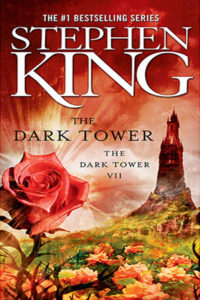 “As befits the climax of a sci-fi Western with undertones of Arthurian high fantasy, The Dark Tower is all about showdowns and shootouts. It opens with two characters walking into a New York restaurant filled with vampires and worse. It ends with its enigmatic central character, Roland the Gunslinger, discovering his destiny at the top of the edifice that serves as a nexus for an untold number of universes. Between these two events come the birth and revenge of a terrible spider-child named Mordred, the destruction of a prison for telepaths and a mission to save the life of a certain best-selling author from Maine.

At this juncture, there’s little point in trying to summarize the plot. The real issue is: Does it work? Can King’s jerry-built epic withstand three decades’ worth of accreted subplots, themes and self-referential allusions without buckling under the stupendous weight of it all?

Surprisingly, it does. Not perfectly, of course. Some of the set pieces go on far too long, the mystical mumbo-jumbo grows tiresome and a couple of encounters that should have been pivotal end up seeming rushed and superfluous. But that’s quibbling. Most readers who have followed this tale from the beginning will not be disappointed by its conclusion. In an afterword, King writes, ‘I wasn’t exactly crazy about the ending, either, if you want to know the truth, but it’s the right ending. The only ending, in fact.’

He’s absolutely correct, and it’s a testament to his prodigious skill as a storyteller that King could recognize that fact and stick by it. Given its inauspicious beginning with The Gunslinger, a highfalutin hodgepodge by an ambitious but largely untested writer, The Dark Tower more than delivers on what has been promised.

The Dark Tower is very much a valediction, especially in light of King’s public insistence that this may be his final novel. Longtime fans are likely to feel a pang of genuine sadness in its final pages, not only for the characters and their diverse fates, but for the closing of a chapter in their own lives as readers.” 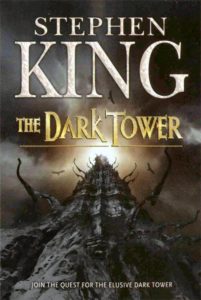 “Taken entirely on its own, that last subplot might seem anywhere from self-indulgent to psychotic, but taken in context with the other vehicular accidents that have cropped up in King’s work since 1999, it reads as obsessive to the point of distraction. That’s a shame in a book that already feels distracted. It’s easy to wonder how the series might have concluded had the accident not forced major health issues and the specter of imminent mortality into King’s life.

But that aside, The Dark Tower is a monumental adventure that echoes King’s best work, even where it doesn’t quite live up to it. Beyond that, it’s a resolution 22 years in coming, and any disappointments are minor compared to the pleasure of seeing the work finally completed—not merely adequately, but in compelling high style. Like the series’ other installments, The Dark Tower is a powerful, broad, soaring fable packed with the visceral human insight and creativity that has marked King’s career from the beginning. The Dark Tower books contain his finest writing, his highest ambitions, and his most indelible characters. Its triumphant conclusion after all these years reaffirms King’s place as a populist yarn-spinner of the highest order.