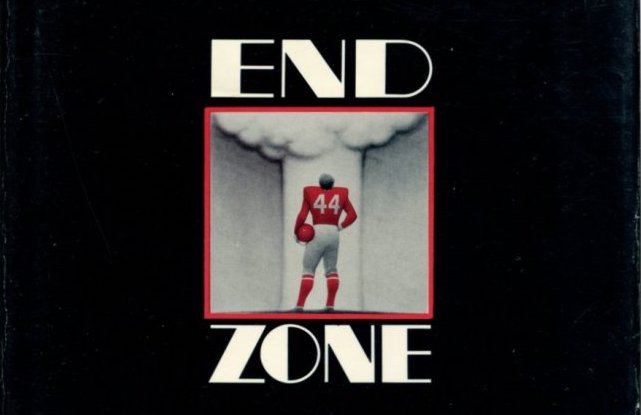 "A Touchdown for Don DeLillo" 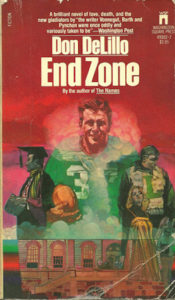 “How now to celebrate the magic of Don DeLillo’s second novel without making it sound like merely glorious verbal horseplay, or merely—to paraphrase de Lautrémont, the 19th-century French poet, on Beauty—the fortuitous encounter of a football team and a poet on a rubdown table? Let’s try approaching the matter in a roundabout way. In honor of Logos College’s last football game of the season, Gary Harkness, star running back (and the novel’s narrator), takes up his girl friend’s suggestion to get high on pot and see whether during the game his ‘sensory parts function in terms of football or dope.’ The result is predictable: ‘As I started out I felt unbelievably ponderous. My head was made of Aztec stone. I watched my feet go slowly up and down over the marvelous grass . . . I reached the huddle. I realized I didn’t want to be with all these people. They were all staring at me through their cages. Hobbs [the quarterback] called a pass play. We broke and set. Somebody came at me, a huge individual in silver and blue. I fell at his feet and grabbed one shoe. I started untying the lace. He kicked away from me and went after Hobbs. I got up and walked off. I was exceedingly hungry.’

“In the same way, the mouth that tells the story of End Zone has acquired a life of its own, and the words it speaks are guides to a thinking process of sorts. But the mouth has no brain to guide it; the mind that conceived the words has long since left the scene.

Thus each of the characters speaks a jargon that mocks its origins, a reduction to the absurd of what once passed for thought. Coach Emmett ‘Big Bend’ Creed observes that ‘I’ve never seen a good football player who wanted to learn a foreign language.’ His staff exhorts the players to ‘give the maximal effort. . .run with reckless abandon until you’re hit. When you’re hit, button up. . .Become fetal. Get fetal. Get fetal.’ Major Staley, Logos’s Air Force R.O.T.C. adviser, urges Gary to ‘join the cadet wing’ because the ‘Air Force is the most self-actualizing branch of the military.’ Gary’s girl friend, Myna, prefers to stay sloppily fat because ‘Almost everyone has something stuck inside them. Inside me there’s a sloppy emotional overweight girl. I’m the same, Gary, inside and out. It’s hard to be beautiful. You have an obligation to people.’

Anatole Bloombert, Gary’s 300-pound roommate (‘I feel like an overwritten paragraph’) is trying to ‘unjew’ himself because he cannot bear his people’s ‘enormous nagging historical guilt . . . of being innocent victims.’ Pippich the P.R. man believes in shaking hands (‘handation’) and building up things up (‘bigation’). Billy Mast is taking a course in ‘the untellable’ and shouts ‘in German a lot’ on the theory that ‘if any words exist beyond speech, they’re probably German words, or pretty close.’ And Gary himself finds his only sustenance in the terminologies of football and nuclear holocaust—the languages of end zones. The end zones of language.

“All of which may explain what Mr. DeLillo is up to but leaves out everything that makes his novel wonderful—the craft with which he builds the scenes that make the foregoing lines seem funny; the grace and humor of his own narrative voice; the football fantasies that would make even Alex Karras envious; the football game told in pure jargonese that makes up the exciting centerpiece of the novel; a pick-up game played in the snow that ought to be placed all in textbooks on creative writing to demonstrate the art of building a scene—simply everything.

In his first novel, Americana, Mr. DeLillo saddled his magnificent verbal talent onto a drayhorse of a plot about a disillusioned advertising man who goes West to capture the images of the American past on home movies of the mind. After reading it, one entertained the hope that the author might some day find a vehicle worthy of his talent, would find some ballast for his word balloons. With the writing of End Zone he has fulfilled that hope in the twinkling of an eye. The suddenness of his arrival places him among our best young writers. It makes one wonder whether there are any limits at all to his potential growth.”