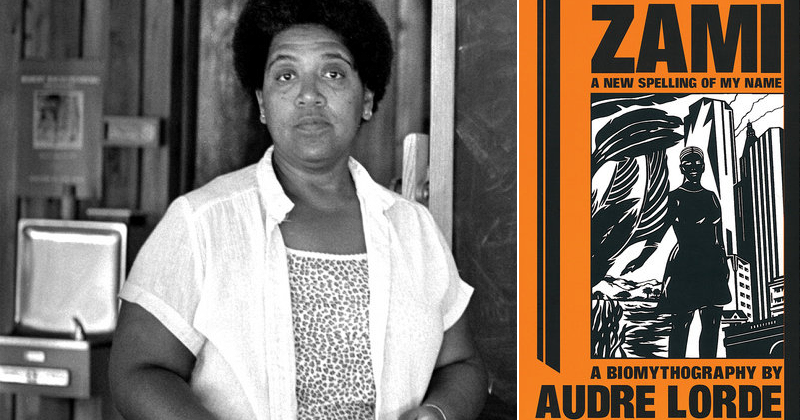 A 1982 Review of Audre Lorde's Zami and Chosen Poems 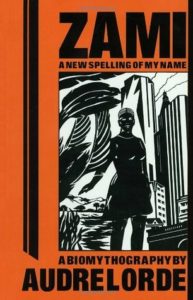 To go to bed and to wake up again day afte day besides a woman, to lie in bed with our arms around each other and drift in and out of sleep, to be with each other not as a quick stolen pleasure, nor as a wild treat but like sunlight, day after day in the regualr course of our lives. I was discovering all the ways that love creeps into life when two selves exist closely, when two women meet.

“Carriacou is an actual West Indian island as well as the isle of Audre Lorde’s imagination; Zami is ‘a Carriacou name for women who work together as friends and lovers.’ And while the publisher’s claim that in Zami Miss Lorde ‘creates a new form, biomythography, combining elements of history, biography and myth,’ is a bit pretentious, the book is, actually, an excellent and evocative autobiography.

Indeed, among the elements that make the book so good are its personal honesty and lack of pretentiousness, characteristics that shine through the writing, bespeaking the evolution of a strong and remarkable character. The reader quickly grows to love the sturdy little black girl—daughter of parents immigrated to New York from Grenada before she was born—who is tongue-tied, unable to see without her glasses; who forces herself to stay awake half an hour after her parentally-imposed bedtime in order to listen to the stories nightly serialized by her two older sisters; who, in her loneliness, dreams of having a ‘little female person’ all her own; yet who yearns for the magical moments of privacy disallowed by a stern mother who, considering solitude a social perversion, insists that Audre’s bedroom door remain open except when she is studying, constantly studying. 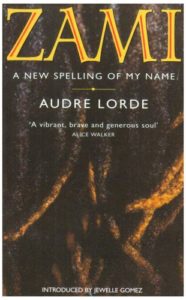 “With her, we experience the pain of her gradual recognition of racism (something from which her powerful mother seeks for years to protect her); the suicide of a teen-age best friend for whom she has been able to do nothing. With her, we leave the rigid confines of home—a Washington Heights apartment—at 17 to become marginally self-supporting; to endure (at times) hunger, an abortion and Christmas alone. We share her growing awareness of her attraction toward her own sex; her first affairs with women; a longed-for trip alone to Mexico at 19-feeling-like-35, on one of those journeys that serve as routes for psychic discovery; and life as a ‘gay-girl’ in the Greenwich Village of the 50’s. We live with her through her first primary love relationship and its excruciating conclusion; and, finally, an affair with a black Southern woman—Afrekete—whose sensuality and independence equal her own; it is a relationship that becomes metaphor for her conciliation with her own reality, and with the world.

Throughout, her experiences are painted with exquisite imagery. Indeed, her West Indian heritage shows through most clearly in her use of word pictures that are sensual, steamy, at times near-tropical, evoking the colors, smells—repeatedly, the smells—shapes, textures that are her life. Her attention to detail is exacting whether she’s describing a supper of hot tamales and cold milk in Mexico City or an evening of bar-hopping in the West Village of two decades ago. Her use of language is often imaginative but uncontrived, as in her description of her first lover, Ginger, as having ‘high putchy cheeks’ or her reference, in one of the many meals deliciously detailed in the book, to ‘chopped onions quailed in margarine.’ 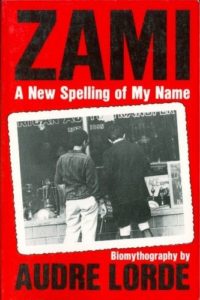 “Yet Miss Lorde is at her best when her images become—as they often do—metaphors for states of being: A torn stocking caught in the wind on the side of a tenement building becomes symbol of her terror when, as a small child, she hangs by one hand from the window of her apartment, only to be saved by her mother’s timely return home. Or the day she has begun her first menstrual period: Left alone by her usually ever-present mother in the kitchen, she crushes with mortar and pestle the garlic, onions and celery leaves that will season the meat for dinner; as she pounds—and pounds and pounds—she becomes carried away, the scents from the ground herbs mixing with her own. And her membership at Hunter High School in what she calls The Branded, The Lunatic Fringe, is really her wider membership in that part of the population made up of artists, blacks, women and homosexuals.

Despite her obvious poet’s ease with symbol, metaphor, image, her references to herself as poet—a vocation held since childhood—are unemphatic: ‘… sometimes there was food cooked, sometimes there was not. Sometimes there was a poem, and sometimes there was not. And always, on weekends, there were the bars,’ she writes, describing life with her lover Muriel. And while her downplaying of her commitment to poetry may be partly an attempt to avoid widening the distance between the reader and herself, there is the sense, in Chosen Poems as in Zami, of a writer who has other, more pressing concerns—such as cooking a meal, making a living, or simply living out the life style that for many homosexuals is an avocation in itself. It is as though the life on the streets was so rich that it left little time for meticulous literary stitching up in some West Village or Staten Island tower; she is distant from Sylvia Plath or Anne Sexton who, out of isolation, even alienation, made language scream; or Cynthia McDonald and Marilyn Hacker, with their intricate linguistic embroideries. This imperative immediacy sometimes gives Miss Lorde’s poems an undeveloped, abstract air, leaving one wishing for the exacting detail of her prose, the evocation of the undeniable, concrete world made fully tangible in Zami. 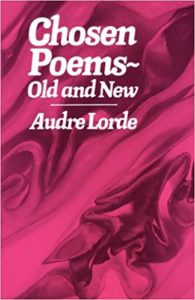 “At the same time, Miss Lorde’s poems are refreshingly removed from the pale frozen works of many poets, who appear immobilized by the image of themselves as poet. Instead, she is a poet of her time, her place, her people, and unlike poets whose works fall apart when fused by conviction, she is at her best in her most political pieces:

I inherited Jackson, Mississippi. For my majority it gave me Emmett Till his 15 years puffed out like bruises on plump boy-cheeks his only Mississippi summer whistling a 21 gun salute to Dixie as a white girl passed him in the street and he was baptized my son forever in the midnight waters of the Pearl.

So she writes in ‘Afterimages,’ a poem in which her empathy extends finally even to the white woman who has caused Emmett Till’s terrible death. In the more recent poems in this volume, which draws from works written over 30 years, she employs increasing imagistic skills; yet even some of the earlier poems—such as ‘Martha,’ a long piece about a woman hospitalized and fighting for her life—are strong enough to give a reader the kind of gut-level jolt Emily Dickinson deemed the most reliable judgment of a poem.

To read both these volumes is to feel, at least for a few hours, that one has lived, not merely intellectualized, Audre Lorde’s life. Throughout each, one is aware of the author’s growth toward an unusual autonomy. For readers who begin with Zami, Chosen Poems will serve as recognizable markers for that journey and since the autobiography concludes in 1960, an extension into present-tense awareness. Her works will be important to those truly interested in growing up sensitive, intelligent and aware in the second half of the twentieth century in America.”