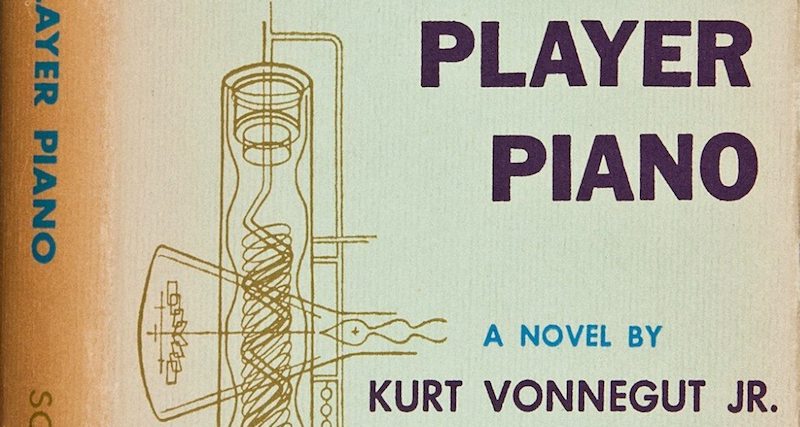 "Whether a trustworthy prophet or not, Mr. Vonnegut is a sharp-eyed satirist," said The New York Times' review of Vonnegut's debut, Piano Player 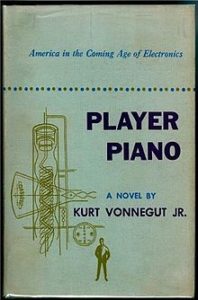 I want to stand as close to the edge as I can without going over.

Out on the edge you see all kinds of things you can’t see from the center.

“Two books that were popular several decades ago—Ignatius Donnelly’s Caesar’s Column and Jack London’s The Iron Heel—are brought to mind by Kurt Vonnegut’s novel. In it, as in them, we are taken into the future and shown an America ruled by a tiny oligarchy, and here too there is a revolt that fails.

The important difference lies in the fact that Mr. Vonnegut’s oligarchs are not capitalists but engineers. In the future as he envisages it, the machines have completed their triumph, dispossessing not only the manual laborers but the white collar workers as well. Consequently the carefully selected, highly trained individuals who design and control the machines are the only people who have anything to do. Other people, the great majority, can either go into the Reconstruction and Reclamation Corps, which is devoted to boondoggling, or join the army, which has no real function in a machine-dominated world-society. 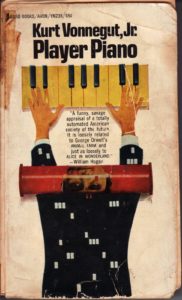 “It is a little like Brave New World, except that Mr. Vonnegut keeps his future closer to the present than Aldous Huxley succeeded in doing, and his satire therefore focuses more sharply on the contemporary situation. The machines he is talking about are not gadgets he has dreamed up; they are in existence, as he is careful to point out. Moreover, his engineers are less of supermen than Huxley’s Alphas, and their group morale is maintained by methods one can find described in William H. Whyte’s recent book, Is Anybody Listening?

The story, which is told in a skillful, lively fashion, concerns Paul Proteus, one of the privileged engineers. Unhappy in his own role and increasingly aware that the masses are being frustrated and degraded, he joins and becomes nominal leader of a revolutionary organization, the Ghost Shirts. At first the rebellion seems to be succeeding, but then the mob gets out of hand, just as in Caesar’s Column and The Iron Heel, and there is an orgy of destruction. Proteus and his companions, however, do not give up hope until they find that their revolutionary followers are busily making gadgets out of the scraps of the machines they have been destroying. That is too much, and they surrender to the oligarchy. 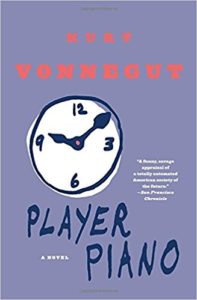 “Player Piano is a less earnest book than either Caesar’s Column or The Iron Heel, and a less serious one than Brave New World, but what Mr. Vonnegut lacks in fervor he more than makes up in fun. To take only one example, nothing could be more amusing than his account of the antics of the aspiring engineers when they gather on an island in the St. Lawrence for pep talks, competitive sports, formalized informality and the careful cultivation of the big shots. Whether he is a trustworthy prophet or not, Mr. Vonnegut is a sharp-eyed satirist.”