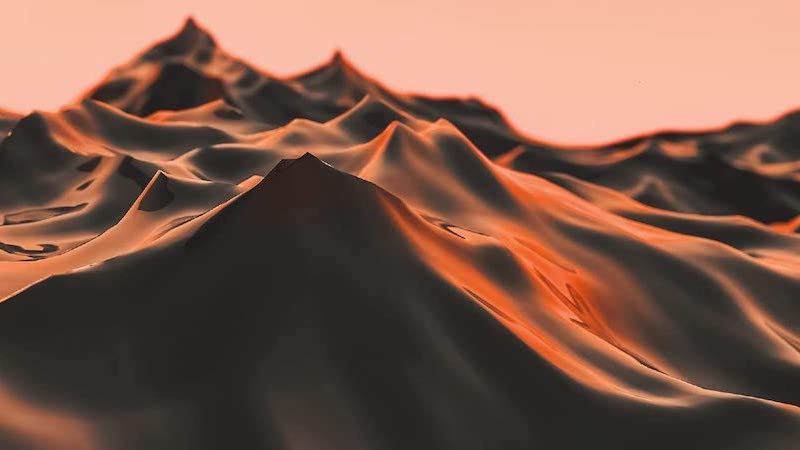 8 Sci-Fi and Fantasy Books to Jump-Start Your July

This has not been an easy start to summer; the record-destroying heat and storms seemingly everywhere are pressing reminders of our planet’s future, and it’s difficult to get yourself in the beach read mindset when your fundamental rights are being stripped away. But there is a comfort in witnessing the new work released into the world each month (supply chain issues be damned!), especially when it’s as imaginative and incisive as July’s new sci-fi and fantasy. There’s also nearly as many new horror tales coming out this month, but we had to cap the list somewhere or else it’d be twice as long. That said, do not sleep on Nat Cassidy’s Mary: An Awakening of Terror, Sarah Gailey’s Just Like Home, Paul Tremblay’s The Pallbearers’ Club, or Silvia Moreno-Garcia’s The Daughter of Doctor Moreau.

…OK, we slipped a few other horror offerings into the list, because between an Edgar Allan Poe retelling (Poe in the summer, why not!) and a deep dive into the science of why we love horror movies, how could we not?

Our Wives Under the Sea by Julia Armfield
(Flatiron Books, July 12)

The title of Julia Armfield’s debut novel (after her acclaimed short fiction collection Salt Slow) refers to the online role-playing group to which Miri belongs while her wife Leah is gone for six months—except that these women pretend their husbands are astronauts lost in space, and Leah is stuck at the bottom of the ocean in a malfunctioning submarine. It’s these kinds of parallels between space and sea that give you a sense of how thoughtfully Armfield has approached this modern horror love story, as Leah’s eventual return to the surface brings a host of bizarre side effects including oyster-silver skin and the need to spend long hours in the bath playing otherworldly music. Armfield’s lyrical prose aside, I’m just excited to see a queer couple at the heart of a story with The Astronaut’s Wife vibes, yet which sounds like it will get much more under your skin. 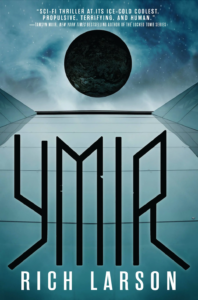 This science fiction retelling of Beowulf transplants the epic poem to the eponymous planet of Ymir. Our hero is Yorick Metu, better known as “the butcher” for the gory massacre that marked his self-imposed exile from Ymir twenty years ago. But all epic heroes must be called back to action, and for Yorick—who had half his face blown off and survives via constant intake of stimulants—it’s the plea from his former employer to fight off an alien machine terrorizing Ymir’s mines. The name of the machine? A grendel, of course. But the biggest challenge for Yorick will be facing his brother Thello, who decades ago made him into the man he is now. 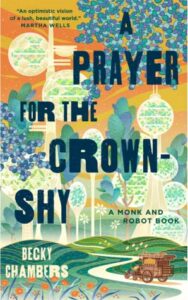 A Prayer for the Crown-Shy by Becky Chambers
(Tordotcom Publishing, July 12)

A Psalm for the Wild-Built, the first installment of Becky Chambers’ Monk and Robot novella series, combined tea and entropy in a way reminiscent of a quirky afternoon tea service. The sequel reminds us that this elaborate meal doesn’t have to be a one-off treat. After attaining a level of celebrity on their moon Panga in their first adventure, tea monk Sibling Dex and wild-built robot Splendid Speckled Mosscap tour the various human settlements to answer Mosscap’s pressing question: “What do humans need?” With the other robots having removed themselves from their makers’ society once they gained sentience in the Awakening, Mosscap’s question—and the conversation it will force about need versus want—is bigger than mere curiosity. 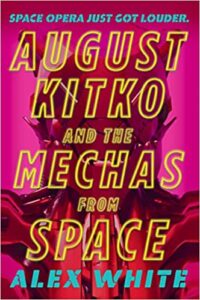 August Kitko and the Mechas from Space by Alex White
(Orbit Books, July 12)

Thrumming with the same infectious charm as Catherynne M. Valente’s Space Opera, Alex White’s apocalyptic adventure also places humanity’s final chance to avoid extinction into the trained hands of a talented musician. But instead of using an interstellar Eurovision as the backdrop, White mashes up the fate of pianist August Kitko with the likes of Neon Genesis Evangelion—that is, Gus is ready to literally play out humanity’s final moments in 2657 at a gig, when instead the fearsome mecha Greymalkin plucks him out of obscurity to join forces. It turns out that some of the biomechanical Vanguards that were meant to destroy Earth have broken off into a rebel faction, and Gus is their Conduit. From the start, this musical space opera is wry and delightful, and seems like the ideal boppy summer read. 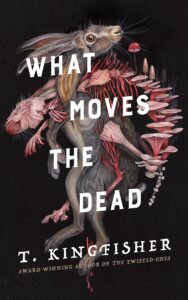 What Moves the Dead by T. Kingfisher
(Tor Nightfire, July 12)

Under the self-described “vaguely absurd” pseudonym T. Kingfisher, Ursula Vernon has adapted Edgar Allan Poe’s Gothic tale “The Fall of the House of Usher” as an even eerier novella. She begins by naming the anonymous narrator and giving them pronouns: Alex Easton, who goes by ka/kan. A retired soldier, Alex visits old war buddy Roderick Usher at his family’s decaying estate, only to discover that both Roderick and his sister Madeline seem strangely afflicted: she with paralyzing episodes of catalepsy, he with debilitating nerves. Not to mention the hares in this remote town of Ruravia, that behave as if they’ve never seen humans before… Kingfisher’s horror (The Hollow Places, The Twisted Ones) is as atmospheric as ever. 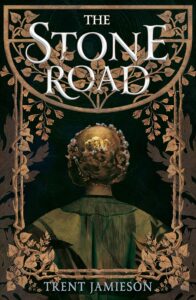 Trent Jamieson has two books forthcoming from Erewhon set in the same universe: Day Boy (publishing in August) and its semi-sequel/standalone The Stone Road, which precedes it this month. Both are set in a post-oil fantasy world, though their protagonists inhabit very different corners and mythical roles within this far-future setting. The Stone Road focuses on three generations of March women, with the birth of young Jean signaling that her omniscient grandmother Nan and swashbuckler-turned-alcoholic mother Ella must train her in the family ways. Because Jean’s birth has set the Furnace burning—the first flames in quite some time—and opened the mouths of the dead. Jamieson seems intent on releasing a number of stories and books exploring this world, with the opportunity to enter at any point. 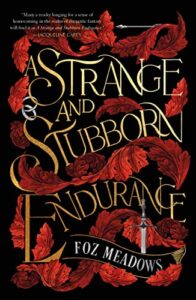 I will never stop being delighted by the increasing tide of SFF romance that’s been hitting our shelves in the past few years (to say nothing of forebears like Jacqueline Carey, KJ Charles, and many more!), and it’s great to see titles like this one being released in time to tango with contemporary romances and other beach reads. Last year Tor Books published Everina Maxwell’s queer arranged-marriage space opera Winter’s Orbit; Foz Meadows’ latest, then, feels like the fantasy yang to that yin. This political marriage weds strangers Velasin vin Aaro and Caethari Aeduria, an unexpected union after Vel accidentally torpedoes his original arranged marriage to Cae’s sister with the revelation that he prefers men. Not to let the opportunity for an alliance slip by, their respective realms Ralia—which forbids queer relationships—and Tithena figure the betrothed’s brother is the next best thing. But what Cae most needs out of a marriage, even an arranged one, is trust… and I have a feeling there’s going to be plenty of political intrigue to threaten this strangers-to-lovers romance. 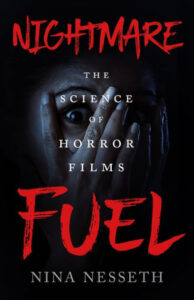 From its first careful analysis of a classic horror jumpscare, Nina Nesseth’s pop science offering is both approachable and mighty impressive in how it breaks down the limbic responses that cause us to shriek when the protagonist stands up and there’s a monster behind them. It’s like if you went to see a slasher flick with Mary Roach and then wound up dissecting every shriek and laugh over the remains of your popcorn. Considering that Nesseth did a deep dive into The Science of Orphan Black, she clearly knows how to meld the personal experience of watching TV and film with all of the fascinating neurons firing off the screen.