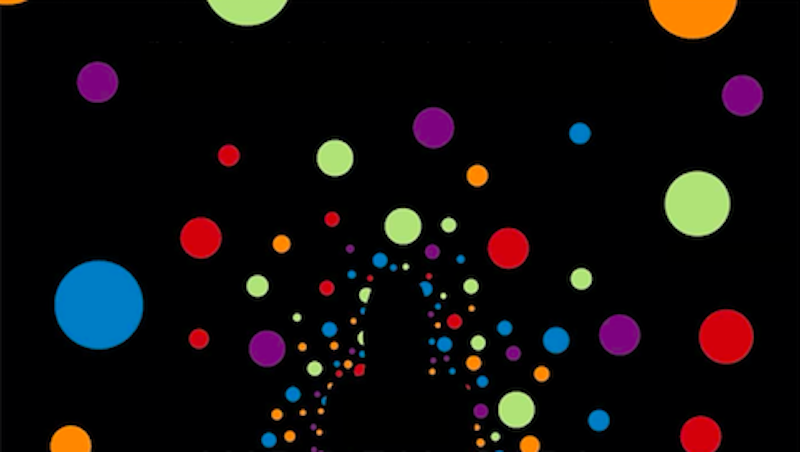 5 Sci-Fi and Fantasy Books to Watch For in February

Featuring a futuristic western, a sexy orc saga, the return of Ken Liu, and more

How can such a short month be stuffed with so many amazing books? I have reconfigured and pared down and debated, and finally came up with five titles that I think cover the most interesting corners of February’s sci-fi and fantasy landscape. This month will give us two fantastic short story collections, an IKEA-like store that has an unfortunate habit of sucking patrons into interdimensional portals, queer librarians risking their lives to fight fascism, and, at long last, A SEXY ORC. 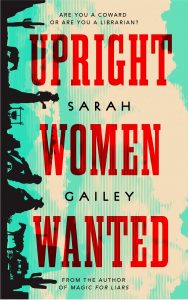 Sarah Gailey follows her magical-boarding-school-murder-mystery, Magic for Liars, with Upright Women Wanted. In this near-future Western, the only thing standing against a fascist dystopia is a group of gunslinging, roving librarians—which is basically the coolest thing I’ve ever heard.

Esther’s father has decided on the man she’ll marry. No matter that the man was, until recently, engaged to her best friend Beatriz, or that she’s still lost in grief because Beatriz was executed by the government for owning forbidden books.

No matter that Esther was in love with Beatriz.

When the librarians rattle into town with their wagon of books, there’s only one thing to do: Esther stows away in the stacks and heads out for a new life. She soon learns that not only are the head librarians, Bet and Leda, a secret lesbian couple, but that, together with their nonbinary apprentice Cye, they’re determined to bring the oppressive government down, no matter the cost. Can Esther find her strength, prove herself to her found family, and save what’s left of America? 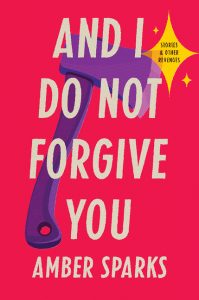 And I Do Not Forgive You by Amber Sparks
(FSG, February 11)

2016’s The Unfinished World is one of my favorite collections, so I’m just a little excited that Amber Sparks has returned with a new book of stories! As in her previous collection, Sparks’ stories ricochet through realism, historical excavation, fairytale, and myth, all of them fizzing with sharp wit and cut with melancholy.

To give you a few hints of the delights awaiting you: “You Won’t Believe What Really Happened to the Sabine Women” retells the story of the Rape of the Sabine Women through their own eyes; “In Which Athena Designs a Video Game with the Express Purpose of Trolling her Father” recasts Athena as a videogame designer, and Zeus as a disconnected, sports-loving dad, whose only concern is that his daughter gives the game’s nymphs “big tits” (Eww, Zeus. Even for you, EWW.); “A Place for Hiding Precious Things”, previously published in the Pink Issue of Fairy Tale Review, riffs on “Donkeyskin,” while “A Short and Slightly Speculative History of Lavoisier’s Wife” digs into what little is known about the wife/lab assistant of the French Revolution-era scientist.

And those are only a few! In each story Sparks centers overlooked characters and uses pop culture and internetspeak to give us new angles on classic stories. 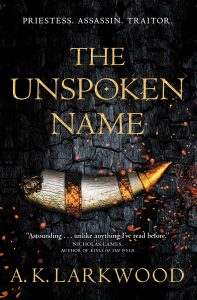 Csorwe is an orc priestess. On the appointed day she will climb a perilous mountain and sacrifice herself in the Shrine of the Unspoken. This is her destiny, and the only path imaginable.

But what if destiny isn’t always so black-and-white?

When a wizard comes to her with a choice, Csorwe sees a new life unfolding before her, a life where she can become a magical spy and a cunning assassin, all in the service of a mage who wants to reshape their empire in his own image. Can she turn her back on eons of tradition to create a new path? Can she trust the wizard who’s offering her the world? And what happens if the gods decide Csorwe still owes them a sacrifice? 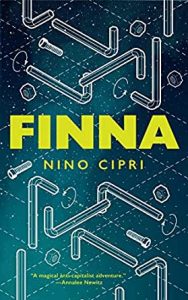 It’s an ordinary day at a Swedish Big Box store—no, no that one, a different one—when an elderly woman takes a wrong turn and falls through an interdimensional portal. This is why you always follow the floor arrows, people! So now this poor lady is lost in time and space, and a pair of workers have to set out on a quest through the multiverse to find her and bring her back…and hope she doesn’t sue.

And as if that isn’t bad enough, the only two workers up for the task just broke up last week.

Now Ava and Jules have to put their resentment aside and fight their way through aggressive furniture, cloned company spokespeople, and the odd wormhole to try to save an old lady, keep their minimum wage jobs, and maybe, just maybe, see if their feelings for each other can become a new kind of friendship. 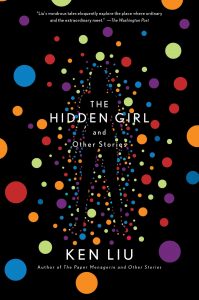 The Hidden Girl and Other Stories by Ken Liu
(Saga, February 25)

Ken Liu’s last outing, The Paper Menagerie and Other Stories, featured a title story that became the first piece of fiction ever to win the Nebula, Hugo, and the World Fantasy Award all in the same year. His new collection, The Hidden Girl and Other Stories, gives us sixteen sci-fi and fantasy stories, a novelette, and an excerpt from The Veiled Throne, which will be the third novel in his “silkpunk” Dandelion Dynasty Series. But to give you an idea of why Liu’s stories sing, here is a moment from the title story, in which a young assassin-in-training prepares to kill a man for the first time:

I crawl over the roof, my palms and feet gliding over the tiles smoothly, making no sound—Teacher trained us by having us glide across the valley lake in March, when the ice is so thin that even squirrels sometimes fall through and drown. I feel one with the night, my senses sharpened like the tip of my dagger. Excitement is tinged with a hint of sorrow, like the first stroke of the paintbrush on a fresh sheet of paper.

We don’t get a training montage, or a weapons inventory, or a stern lecture from Teacher. Instead we get an intake of breath as our hero understands that she’s about to become a different person, and there’s no going back.