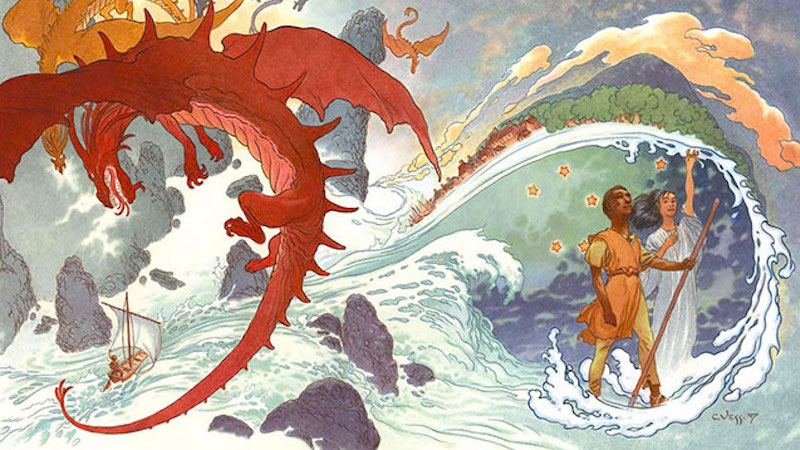 Hello, and welcome to our inaugural SFF column! I’m Leah Schnelbach, and I’m a staff writer for Tor.com, where I write about everything from the esoteric theories behind Mystery Science Theater 3000 to what makes Ursula K. Le Guin so freaking great. I’m excited to join you here on Book Marks, where each month I’ll be recommending new science fiction, fantasy, speculative fiction, and writing that can only be described as genrefluid. Occasionally I’ll also pop in a classic book or two that I think deserves some fresh love.

If you have any of your own November SFF favorites, I’d love to hear recommendations in the comments! 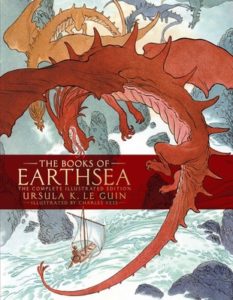 The Books of Earthsea by Ursula K. Le Guin (Saga)

Laurie Anderson once said that when her father died it was “like a library burned down.” That’s how it felt when Ursula K. Le Guin left us, and that’s part of why I’m leading this list with the big muther of SFF in November. Having this book is like getting a tiny corner of that library back. The gorgeous omnibus celebrates the 50thAnniversary of Ursula K. Le Guin’s landmark series, and collects all of the Earthsea chronicles, from the first short stories to the latest novels. That alone would make it important, but the book also includes more than fifty illustrations by Charles Vess, plus Le Guin’s Oxford lecture, “Earthsea Revisioned,” and a never-before-published story and an introduction from Le Guin. If you’ve never read Earthsea you’re in for a wonderful experience, as Le Guin’s tales combine the best elements of high fantasy with her own prickly philosophy. And obviously if you already know and love Ged, Tenar, and Tehanu, you need this book on your shelf.

An Agent of Utopia by Andy Duncan (Small Beer Press)

Andy Duncan’s collection of twelve short stories, includingWorld Fantasy Award-winner “The Pottawatomie Giant” and Nebula Award-winner “Close Encounters” ranges over the South, riffing on folktales, UFO abduction theories, and, even, in “Unique Chicken Goes in Reverse,” the singular moment in our timeline when Flannery O’Connor became a child star because of her weird pet chicken.

By including this story, though, Duncan is making a larger point. His work pokes at some of the biggest icons of the South in order to explore the concept of the South itself. Rather than just coasting along on Southern Gothic pastiche, or mocking the oddness of Southern culture, Duncan’s stories seek out unseen corners of Americana, and balance a sense of fun and silliness with a deeply-felt social consciousness that pushes us to examine our beliefs and prejudices as we read.

Jeff Jackson’s Destroy All Monsterstells an eerie tale of an epidemic of rock’n’roll murders. A rash of inexplicable murders hits the music world when fans begin killing their favorite stars, during shows, onstage—and no one can tell if it’s simply a series of copycat killing, or if some supernatural force may be to blame. The book follows the structure of all good records by giving us an A-side and a B-side that can be read in either order. Side A, “My Dark Ages,” follows young rock fan Xenie as she tries to investigate the murders, all the while putting herself in greater and greater danger—will she expose herself to the same mania that’s struck so many other fans? Side B, “Kill City,” gives us an alternate history of the murders and the shockwaves that are sent through the music scene. The two sides add up to portrait of music and madness with a dark, horrific heart. 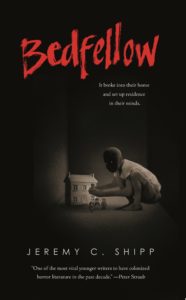 Jeremy Shipp’s previous novella, The Atrocities, was a wonderfully meta take on a haunted house novel that featured twisty, evil topiary and a cameo by a capybara, so you can count on him to take you on a weird and terrifying journey. His latest, the novella Bedfellow, is my favorite kind of horror, where supernatural creatures run right into human psychological cracks and terrible things ensue. Some sort of being has come uninvited to the Lund family’s home, and the family is doing everything they can to live with it. As time goes on they begin to forget that there was a life before the beast. Now their every day is shaped around catering to its whims and trying to appease it. Can they fight back? Can the Lunds’ collective will be enough to overthrow the hold the beast has on their minds? 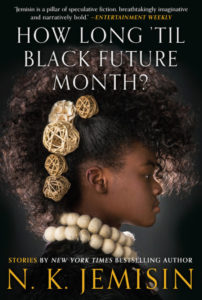 N. K. Jemisin is already a legend. She’s the first author to win back-to-back-to-back Hugo Awards for Best Novel, for the three books of The Broken Earth Trilogy:The Fifth Season, The Obelisk Gate, and The Stone Sky. She reviewed SFF for The New York Timesfor a year, and gave us amazing critical theory on the genre while also recommended a ton of books. And now, finally, her short fiction will be gathered into one handy book with one lovely cover. The stories take us from a post-Katrina New Orleans haunted by dragons, to the rural Deep South, where a mother has to save her daughter from a malevolent snow white fey, to the to Hugo award-nominated short story “The City Born Great,” about a street kid and a city with a soul. Any one of these stories will be among the best SFF of the year.