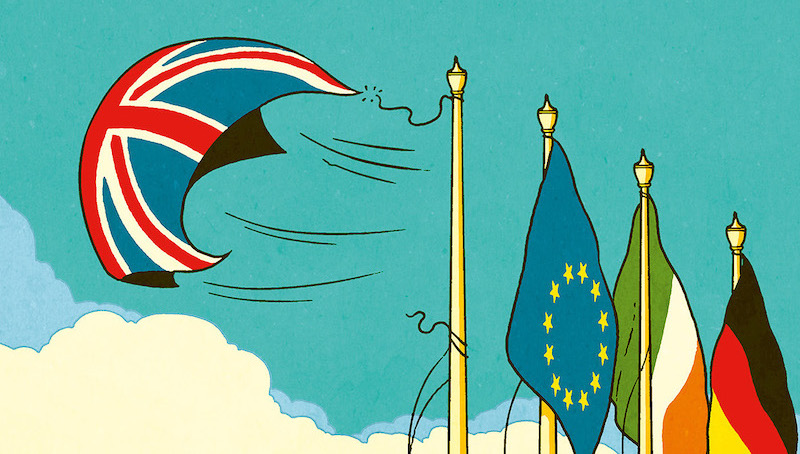 5 Reviews You Need to Read This Week: Bored Billionaires and Brexiteers

In a candid and beautifully-written Los Angeles Times review of Esmé Weijun Wang’s The Collected Schizophrenias, author Scott Cheshire describes his own terrifying diagnosis of schizoaffective disorder, and the way which Wang, in the 13 “resoundingly intelligent, often unexpectedly funny, questioning, fearless, and peerless” essays that make up her debut collection, charts a course through this frightening and often misunderstood terrain.

Over at NPR, in one of the strongest endorsements of a book you are likely to read this year, Michael Schaub finds Yiyun Li’s novel borne of tragedy, Where Reasons End, to be “one of the most original and most accomplished American novels of the decade … the rarest of things: a perfect book, a masterpiece.”

Contrastingly, the award for this week’s most gleefully vicious pan goes to veteran journalist Matt Taibbi, who takes a flamethrower to Starbucks billionaire and presidential hopeful Howard Schultz’s “boring and insincere” autobiography/extended stump speech, From the Ground Up. “From the Ground Up is exceptionally dull,” Taibbi writes in his Rolling Stone review, “so completely devoid of ideas that it’s almost interesting. Schultz makes the Romney family cookbook read like Dante’s Inferno.”

We also take a closer look at Hair Kunzru’s fascinating New York Review of Books piece on Fintan O’Toole’s Heroic Failure: Brexit and the Politics of Pain (“O’Toole sees the exaltation of effort and vain self-sacrifice as ‘an exercise in transference,’ arising paradoxically out of British power”) and Andrew Chan’s 4Columns review of Shane McCrae’s new poetry collection, The Gilded Auction Block (“McCrae knows how to write last lines that prick the heart and snap us into sudden perception”).

“‘Schizophrenia terrifies.’ That first sentence of Esmé Weijun Wang’s unnervingly excellent essay collection bluntly and perfectly explains that reaction. The disease—the word—conjures up constellations of pop culture archetypes of paranoid violence, the babbling shadow-lives of disabled homeless and the unknowable walking dead of sci-fi TV … [Wang’s] essays are all varied lenses on what it is to be one kind of human, to be schizoaffective, to be her. As a whole, The Collected Schizophrenias provides a new and welcome map for the severe landscapes of schizoaffective disorder, of cerebral disease, diagnosis, recovery, and relapse, of the many human mysteries of the schizophrenias. The essays are resoundingly intelligent, often unexpectedly funny, questioning, fearless and peerless, as Wang makes for brilliant company on 13 difficult walks through largely uncharted territory.”

“Scientists may someday find the edge of the universe, but there is no end to the delusional self-regard of America’s one-percenters, as former Starbucks CEO Howard Schultz proved this week … From the Ground Up belongs to the Fuck You: How I Became a Billionaire and You Didn’t genre that has an oddly persistent market in America … Because it’s also designed to double as an extended stump speech, it’s a particularly difficult read—the boring and insincere autobiography of a pretentious oligarch who probably hasn’t been told to his face he’s full of shit since the first Bush administration … The Starbucks origin story is a Freudian horror flick, though Schultz doesn’t tell it that way … Once you get past the somewhat interesting ‘avenging my loser Dad’ portions, the rest of the book is just collections of clichés lifted variously from the campaign-lit and CEO-bio genres. Schultz’s mind is a giant T-shirt … exceptionally dull, so completely devoid of ideas that it’s almost interesting. Schultz makes the Romney family cookbook read like Dante’s Inferno … If Schultz runs and Trump wins, people around the globe will pelt him with batteries and cat turds for all eternity. He’ll wish he long ago died and went to share a hell-cauldron full of Sonics fans. Is anything in the world more dangerous than a bored billionaire?”

“It’s a book born of unimaginable pain; Li began writing it after her own child took his life. It’s also one of the most original and most accomplished American novels of the decade … It’s hard to adequately describe how devastating, and how brilliant, Where Reasons End is. It’s something like a metafiction, an essentially plotless novel that asks the reader to interrogate its language, indeed, to call all words into question. It seems almost disrespectful to say that Li is playing with language here — it would be more apt, perhaps, to say that she’s wrestling with it, trying her best to forge it into a monument for her son … [Li] succeeds, admirably. Where Reasons End is, as it must be, a profoundly sad novel, but Li never descends into mawkishness or sentimentality. She describes perfectly how the death of a loved one takes over the ones left behind, battering the survivors without rest … Where Reasons End is the rarest of things: a perfect book, a masterpiece of American fiction, and it proves beyond a doubt that Li is one of this country’s greatest writers. It’s a beautiful look at what happens when language disappears, betrays us, lets us down…” 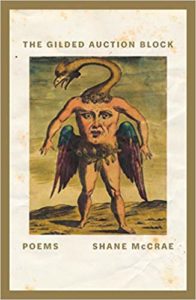 “Where centuries of poetic tradition have led us to idealize the art form as something akin to music, McCrae regularly upends our expectations of mellifluousness, delivering line after line that sounds like it’s being forced through gritted teeth…What’s driving McCrae’s choice of style, though, is the desire to realign perspective, as he draws us into uncomfortable intimacy with the most corrosive strains of our American vernacular … The Gilded Auction Block starts off as a sweeping address to the nation, with a brittleness that echoes the grim inauguration speech Donald Trump delivered in January 2017. The president himself turns up as a recurring voice; in him, McCrae has found not just his muse but his competition, someone as capable as he is of twisting sentences into awkward and unrecognizable shapes … As with the best of McCrae’s work, the spark in these new poems lies not in their openings, which sometimes veer toward the heavy-handed, but in their unnervingly elegant resolutions. For all his attraction to opacity, McCrae knows how to write last lines that prick the heart and snap us into sudden perception … Like his earliest influence, the Sylvia Plath of Ariel, McCrae has an affinity for the white-knuckle moods of psychodrama, yet within that constricted range, the approach is remarkably fluid … Through this disorienting mix of voices we hear our native tongue as both the inflictor of unspeakable damage and the scar that’s been left behind.” 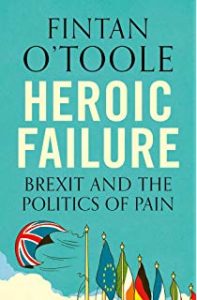 “O’Toole has not come to gloat, though many others around the world are doing just that. He writes in the tone of a disappointed friend, perhaps one sitting in a front room with other friends and family, conducting an intervention … O’Toole argues provocatively that the decline of what might be called traditional British racism made room for a new anti-Europeanism, as if there’s a fixed national quantum of xenophobia that must find an object if the United Kingdom is to maintain its integrity … O’Toole surveys the English cult of heroic failure, exemplified by the charge of the Light Brigade and the evacuation from Dunkirk, as well as such mythologized figures as Scott of the Antarctic and Gordon of Khartoum. He sees the exaltation of effort and vain self-sacrifice as ‘an exercise in transference,’ arising paradoxically out of British power…The immolation of national wealth and prestige on the altar of Brexit would be an imperial last stand, a way to recapture the spirit, if not the material conditions, of the Victorian apogee of British power … The English, whose opinions have been formed by the shallow charmers and their enablers, seem fundamentally unable to conceive of a relationship with Europe that is not one of either subjection or domination. They will try, one way or another, to regain what Enoch Powell called ‘the whip hand,’ even if they have to immiserate the country to do it.”

–Hari Kunzru on Fintan O’Toole’s Heroic Failure: Brexit and the Politics of Pain (The New York Review of Books)