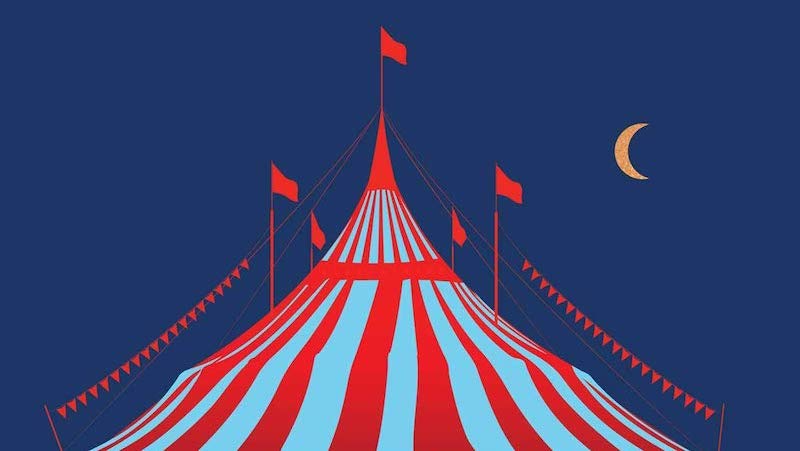 5 Reviews You Need to Read This Week: Murderous Mosquitos and Trick Mirrors

Jia Tolentino as the voice of a micro generation, P. T. Barnum the Prince of Humbugs, Daisy Johnson on Karen Russell's dark fabulism, and more

“Tolentino belongs to the microgeneration that remembers a time before the internet, but for whom the advent of the internet coincided with the advent of adolescence, so that the world-expanding experiences of the two became inextricable from one another. This positioning, right in the middle of the millennial generation, is part of what makes her one of the most persuasive commentators on the seductions and ironies of cultural and other forms of capital, and the ways they move through the digital sphere … None of these essays could be described as ultra-confessional, and none of them dwells on the pain, trauma, or gross-out physical experiences in which Jezebel essays, for example, often specialized. Rather, the most autobiographical essays in Trick Mirror are those that most steadfastly reject distress, adopting instead a slightly distanced optimism. They give the impression of an author who believes that our most private and painful experiences are often not, in fact, the ones through which we learn the most … Some of the hand-wringing in Trick Mirror may go too far. Criticizing something can bring it to a larger audience, but the alternative—a world in which writers only cover subjects of which they approve, ignoring the complicated, the compromised, and the outright pernicious—is not preferable. Elsewhere, the hand-wringing seems to substitute for action that is not, in fact, beyond reach…The most effective essays in Trick Mirror are those that encourage us to be suspicious, and to look for the moments when we can act—without self-flagellation or declarations of virtue—on those suspicions, rather than on our desires.”

“Winegard is particularly interested in wars and conquests, and argues that, for much of military history, deaths caused by mosquitoes far outnumbered, and were more decisive than, deaths in battle … Along with smallpox and influenza, mosquito-borne diseases led, by Winegard’s estimate, to the deaths of ninety-five million indigenous inhabitants of the Americas, from a pre-contact population of about a hundred million. To the colonizers, who spread more slowly than the diseases they brought, these were largely invisible deaths, which helped create the pernicious myth of an empty continent and a Manifest Destiny to fill it … In total, Winegard estimates that mosquitoes have killed more people than any other single cause—fifty-two billion of us, nearly half of all humans who have ever lived. He calls them ‘our apex predator,’ ‘the destroyer of worlds,” and ‘the ultimate agent of historical change’ … we modern folk are also guilty of believing that our hopes and our technology will somehow make us exempt from the workings of the natural world. The entire time that humanity has been in existence, the mosquito has been proof that we are not.”

–Brooke Jarvis on Timothy C. Winegard’s The Mosquito: A Human History of Our Deadliest Predator (The New Yorker)

“Writers have their pet themes, favorite words, stubborn obsessions. But their signature, the essence of their style, is felt someplace deeper—at the level of pulse. Style is first felt in rhythm and cadence, from how sentences build and bend, sag or snap. Style, I’d argue, is 90 percent punctuation … Semicolons are not your workaday periods and commas. They belong to the family of trills and volutes; they exist for the sake of complexity, beauty, subtle connections. Cardinal virtues, I’d say, but Watson traces the warring (and gendered) camps of prose style—a fixation on clarity and directness versus a curled sensibility, one interested in the fertile territories of ambiguity … Watson is sharpest when acting a bit like a semicolon herself, perceiving subtle connections and burrowing into an argument. Whatever her subject, her targets are always pedants, those acolytes of ‘actually,’ all those who profess to love language but seek only to control it … Watson opposes conventions only as they exist to spare us from thinking. Don’t just learn the rules, her clever, curious book prompts us; learn to ask, whose rules (and to admire that semicolon while you’re at it).”

–Parul Sehgal on Cecelia Watson’s Semicolon: The Past, Present, and Future of a Misunderstood Mark (The New York Times)

“Russell’s writing inhabits its own universe, with metaphor and simile taking us to strange new places; we are led by the hand and find ourselves completely submerged, only later to come to, groggily, in our own world … In many of the stories there is a dark ecological anxiety not far from the surface; the world aches like a wound around characters who know only too late that they should be afraid. The natural world is burdened by intimations of climate crisis and Russell’s protagonists are burdened, too, each hunting for something that is lost to them: love or solitude, money or freedom. Often her characters are loners, trapped on the outside looking in, mulling their heavy mistakes. Where another writer might draw back, Russell forges forward … Always Russell’s writing reaches past beauty to find the oddity, the heat beneath … Along with other US short-story writers such as Kelly Link and Lauren Groff, Russell inhabits landscape entirely, bringing the Floridian humidity to every sentence. Where other writers shift towards the novel, aside from the wonderful Swamplandia! she remains steadfastly a short-story writer, and Orange World demonstrates how her attention to this tricky craft has paid off. Though her characters are living their own magic-realist, fabulist lives, it is possible to see ourselves within them, peering out.”

“Barnum called himself the ‘Prince of Humbugs,’ which, generously and perhaps presciently, left open the possibility that one day there would arise a king … Better than anyone who’d come before, the Prince of Humbugs understood that the public was willing—even eager—to be conned, provided there was enough entertainment to be had in the process. That theory of Barnum’s genius makes Wilson’s book peculiarly relevant, although it’s not altogether clear that this is the author’s intent … Wilson admires Barnum. He thinks it’s regrettable that he’s been reduced to a caricature, to the kind of person who’d sneer, ‘There’s a sucker born every minute’—another Barnum line that Barnum probably never actually uttered. In Wilson’s telling, Barnum is a far more complex character—a huckster, yes, but one with high-minded ideals that he strove, sometimes successfully, to live up to … Doubtless it’s true that the cartoon Barnum doesn’t do justice to the real one, who brought so much pleasure and excitement to his contemporaries…But to ask readers to look past Barnum’s faults would seem to miss the point. Barnum became one of the most celebrated men in America not despite his bigotry and duplicity, his flimflamming and self-dealing, but because of them. He didn’t so much fool the public as indulge it. This held for Joice Heth and the Fejee mermaid and also for himself; he turned P. T. Barnum into yet another relentlessly promoted exhibit—the Greatest Showman on Earth. Americans, he knew, were drawn to such humbug. Why they are still being drawn to it is a puzzle that, now more than ever, demands our attention.”